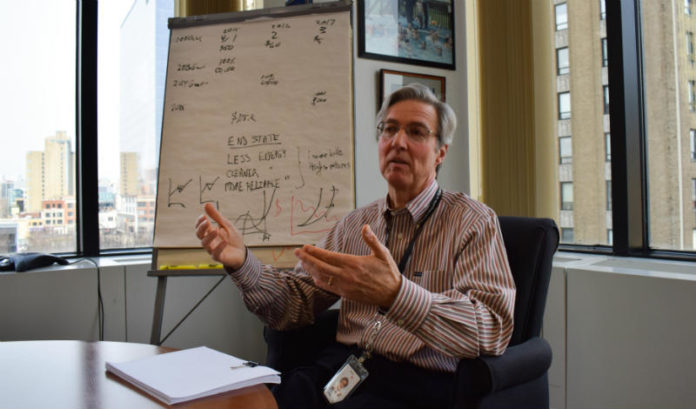 CEO Ralph Izzo said work to reach the target already has begun — it’s part of the company’s Powering Progress vision plan for the future — but he felt it was important to more publicly announce PSEG’s effort because of its significance.

“We’re on what is really kind of an industry-leading trajectory, and no one seems to be aware of it,” Izzo told ROI-NJ earlier this week. “I think there’s a groundswell of recognition that this is serious, and we want to make sure that people know that we absolutely agree it is serious.

The goal is for PSEG to reduce its power-sector carbon emissions by 80% by 2046 before jumping to a net reduction of 100% four years later, Izzo said.

And, while the timeline may seem to jump dramatically at the end, Izzo said it’s a result of PSEG needing outside forces, including public policy and new technology — and a proper amount of time to wind down existing energy producers — to help it reach the goal.

PSEG is nearing completion of its coal exit strategy, which should wrap up in 2021. But Izzo said it will take decades for the company to achieve its goal of dramatically reducing its natural gas plants.

“When we get to 2046, our expectations are that the only gas plants that we would likely continue to operate at that time are the three that we just recently finished building,” he said.

After that, the only remaining hurdles are things currently out of PSEG’s control, he said.

“We don’t have the ability to say, given current technology, we can get it to zero,” he said. “We need some improvements in technologies and help in public policy to get to the net-zero mark.

“A technology example might be improvements in the costs associated with battery storage. A public policy issue might be a price signal from the marketplace that actually recognizes a price on carbon.”

Izzo said the target date is decades a way for financial reasons — specifically the cost to consumers.

“If you tried to do it overnight, it would be too expensive,” he said. “We need to make more progress in New Jersey than we have on what I think should be our No. 1 priority: energy efficiency.

“That is the only technology that I’m aware of where you can reduce carbon and at the same time reduce the cost to the consumer.

“So, it’s these renewable portfolio standards that allow us to make those kinds of investments. And, as a regulated entity, we can’t make the energy efficiency investments without the approval of the Board of Public Utilities. So, having a governor so committed to a clean energy future is vital to being able to do it.”

Izzo talked extensively with ROI-NJ about the push for net-zero carbon emissions. Here’s a look at more of the conversation:

Ralph Izzo: We’ve been on this mission for a while. We want people to use less electricity and natural gas — it’s why we have a big energy efficiency filing in front of the BPU.

And then we say, ‘OK, now that you’re using less, we want what we supply to you to be cleaner than ever before.’ So, we’ve been on a mission where we’ve been retiring our coal plants and we partnered with Orsted on offshore wind and we saved our nuclear plants.

And then, we say, ‘Now that you’re using less and now that it’s cleaner, we’re going to deliver it with greater reliability than ever before so that these horribly intense popup storms don’t result in you losing your power in the future.’

We have a really proud track record that we can point to, but we plan to do even more in the years to come.

ROI: Let’s talk about the ‘years to come.’ Some say we can’t wait years for this transition. How would you respond to that?

RI: With (any clean energy) technology, whether it’s offshore wind or solar, you reduce carbon, but you increase cost to the consumer. These costs are coming down and they have been coming down, but we’ll have to settle that in a way that’s intelligent, so that we don’t overburden the consumer.

So, I think that would be the one caveat: Let’s go home in very aggressively on energy efficiency now. That’s our filing that’s in front of the BPU, which has not received approval, as yet. Let’s make sure we preserve our nuclear plants, which New Jersey has done. Let’s get out of coal; we did that last year in New Jersey. Let’s invest in renewables and at measured pace because they are more expensive, and let’s get on this path to 80% reduction and then eventually net zero.

ROI: How expensive would a quick transition be — and what would be the impact? What would you say to those who feel climate change issues are more important than any other consideration?

RI: I would explain it by saying that I believe climate change is one of the preeminent issues of our time, but it is not the only issue. At any point in time, 18% of our customers are behind in their payments. Yes, New Jersey is third-highest in the country per capita income, but we do have people who can’t pay their bills, who worry about food security, who are in need of housing.

I believe it’s to our credit that we’re making these investments, and these are important things, but if, instead of solar being 3% of the state’s energy, it was 100% of the state’s energy, a lot of people will suffer tremendous economic harm. We’re just not ready to do that. That’s why we’re big champions of energy efficiency. That’s something that can actually lower the bill while reducing the carbon impact and the environmental impact.

ROI: Let’s do a little more on global warming, which many feel is the cause of the catastrophic weather that seemingly is becoming the norm. Superstorm Sandy showed that utilities were not ready for such a storm. When you look at your infrastructure today, do you feel like PSEG is where it needs to be as far as making updates? And do you feel you’re in position to handle another massive storm, as opposed to where you might’ve been five or 10 years ago?

RI: So, you asked two different questions. The answer to the first one is ‘No,’ the answer to the second one is ‘Yes.’ Have we done all that we need to do? Emphatically, no. In fact, we have another request in front of the BPU to do what we said we needed to do right after Superstorm Sandy, but the BPU said, ‘Let’s not do all of that just yet.’

Are we in better shape now? Emphatically, yes. We’ve made a bunch of investments in infrastructure you can actually point to. Our equipment at our substations was prone to failure. We lifted it off the ground, but we did not have the funds to do every substation. So, the equipment that did get lifted did not suffer damage in recent storms and its customers did not lose power. And the equipment that did not get lifted, did get flooded and customers did lose power

ROI: Let’s talk economic development and how it connects to your goal. The wind-farm partnership with Orsted is projected to create 3,000 jobs in New Jersey. Do you see more opportunities such as these looking ahead?

RI: Absolutely. So much of our clean energy future filing has innovation at its core. And we’re not a company that writes computer programs to help people better manage their energy. We don’t manufacture smart thermostats the way Honeywell does, or the way Nest does. We’ve estimated it could create 5,000 jobs in the form of home energy audits and installation of energy saving equipment.

Somebody once said, the stone age didn’t end because we ran out of stones. So, we have to think about moving toward this carbon-free future in a way that I wouldn’t want to be so pretentious as the suggest can articulate every bit of detail that, that will characterize it in the future.

ROI: Final question: The future. If PSEG reaches its goal by 2050, do you think people will look back at you and your tenure at the company as visionary? It’s the legacy question: Does this proclamation help define yours?

RI: In my worst pompous moment, I think the only thing people will say is, ‘Wow, Izzo fit the mold of public service people who are always worried about their customers and the environment in the state of New Jersey, first and foremost.

So, at best, people will say that I was smart enough to pay attention to my predecessors.

How NJR turned Superfund site into one of largest capped landfill...