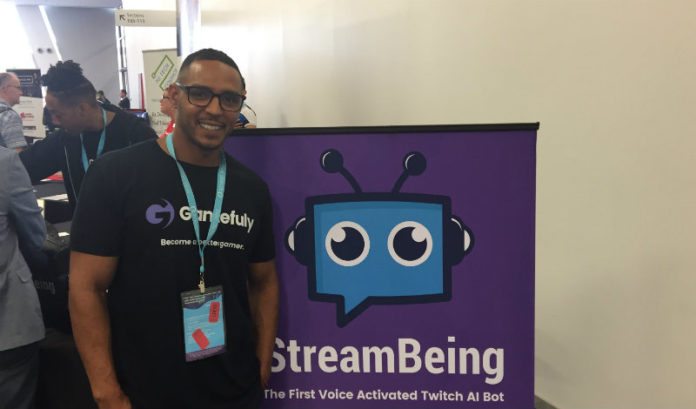 For all the big players at the VOICE Summit 2019 — top officials at Amazon, Samsung and Microsoft all delivered opening-day keynotes — the essence of the conference can be found in the exhibition hall of the Wellness and Events Center on the campus of New Jersey Institute of Technology in Newark.

It’s the place where startups and emerging companies present their products with dreams of making it big. It’s where you find entrepreneurs such as Taseen Peterson, the co-founder and CEO of Gamefuly and a native of Newark.

Last month, Peterson launched Gamefuly, a voice-powered content creation tool for gamers. In essence, with a voice command, gamers can create and share clips of their gaming success on social media.

“We’re a voice-powered content-creation tool for gamers,” he said.

For Peterson, a serial entrepreneur who has more than a decade of experience building digital apps, the inspiration for Gamefuly was personal: He needed something like it — and he found there was nothing on the market.

So, he created it along with two co-founders: his brother, Mark Peterson, who serves as chief technical officer, and Tiffon Turner, who is the chief operating officer.

The reason also was simple: Gamers don’t want to stop playing in order to share.

Voice — as so many others are discovered — provided a unique solution.

“Voice was the easiest interface to streamline the process,” Peterson said. “You can use simple voice commands and share your content all over the world in a matter of seconds when, previously, this might have taken minutes or even hours, depending on how much content you’re sharing.”

Gamefuly launched June 21 and Peterson said he has more than 700 users. The number is growing daily, he said. In fact, it’s designed to do just that.

“The nature of our application creates discoverability and virality, right?” he said. “When you’re sharing your content on social media, we’re also tagging ourselves in that content.

“Users and gamers and content consumers are discovering us on social media. They’re saying, ‘Hey, how was that clip created?’ They see streams being tagged and they’re coming back to our site, they’re going back to the app.”

Gamefuly, which can be found on the iOS App Store, is marketed at three price points: Free, $4.99 and $9.99, depending on how often you want to use it and how many options you want to have.

The premium version, Peterson said, unlocks extras such as storing the raw mpeg movie files to Google Drive and Dropbox folders and having access to them locally on the device.

Peterson is confident the service will catch on. He’s used to having success.

One of the apps he created, Notefuly — what he described as a digital Post-It note — had more than 4 million downloads by the time he sold it.

A 2019 graduate of Techstars, an accelerator in Boulder, Colorado, Peterson said he is planning to fundraise in the fall.

“The idea is to grow our audience,” he said. “We think we have the product.

“Think about what gamers are at a fundamental level: They’re hyperactive on social media with insane following. There are gamers that have millions of followers on social media, so they command a lot of influence.

“If we can build up our community, maybe somebody will buy us.”

Building community is what Pete Erickson, the founder of Modev and the creator of the VOICE Summit, is all about.

Erickson loves that the event is becoming diverse and inclusive.

“This space is still so new that anyone and everyone can get in it,” he said.

The early entrants could be found on expo hall.

Walk-out songs: ‘This is a way everybody can get reenergized and...

I went to a Donald Trump rally. It wasn’t what I...