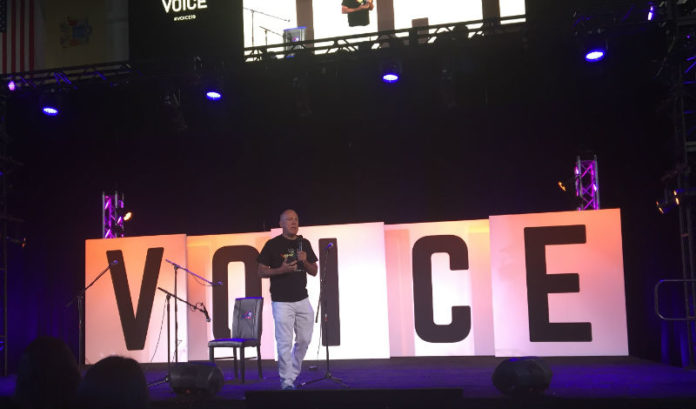 He was running up to the stage, introducing the next speaker at VOICE 2019.

He was meeting with his team, making sure the final moments of the four-day event went as smoothly as the first.

He was shaking hands with so many new attendees — exhibitors and attendees — who told him of all the connections they were able to make.

Most of all, he was thinking of next year and VOICE 2020.

The VOICE Summit this year proved Newark can be a global destination for the ever-growing community of voice-driven technology. It approximately doubled in size this year — from roughly 2,500 attendees in 2018 to 5,000 — and there’s reason to believe it may double again in 2020.

Erickson already has the impetus for it in mind.

While the first two years were about what voice technology can do, next year will be about using that technology to connect voice content to revenue.

“VOICE is now a platform,” he told ROI-NJ. “What that means is that there are a lot of other things happening at this conference that are beyond us and beyond what we organize.

“We feel our job is to amplify this community, and we’re going to continue to do that. We’re already making plans for VOICE 2020. We’re going to add in the content — the podcasters, the live streamers, the music streamers, all that.

“It’s going to be about how to produce, how to market, how to monetize on the content side so it really marries up with the technology we already have represented here. It’s going to get really exciting to add that artistic element.”

Erickson said he feels Newark has added to that element.

Although it was a surprise selection a year ago, Erickson said choosing Newark over other big-name cities was the right call.

“It is the best gamble we ever took,” he said. “This conference would not be where it is had we not chosen Newark.

“Had we chosen to put it in Philly or L.A. or New York, it would’ve been a nice conference, but it would not have had something that only Newark can bring.

“Newark has a very tight-knit community and they have supported us, and it’s been awesome. So, VOICE would not be where it is, but not for the community of Newark and the relationship between the city and industry and the university here at (New Jersey Institute of Technology) in this beautiful new Wellness and Events Center.”

The numbers speak for themselves.

Erickson rattled off some of the basic stats: people from 26 countries, five continents and almost every state.

“So, on the final day day of the conference, I’m just taking it all in and enjoying all these people. Because at the end of the today we have to say goodbye. I get my energy from these people. So, I’m already looking forward to seeing them again.”