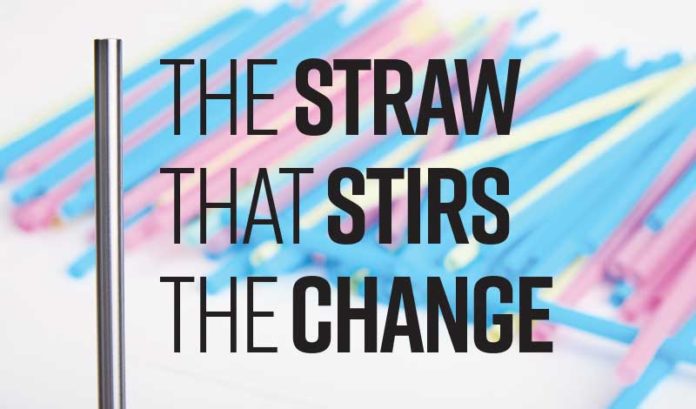 But a growing collection of New Jersey restaurants, including Harry’s Ocean Bar & Grille in Cape May, are working to reduce their use of plastic altogether.

“As a neighbor of the ocean, we at Harry’s understand the importance of protecting the waters and the sea life within,” Jonathan Hirsch, owner of Harry’s Ocean Bar & Grille, said.

“The ocean serves us well, and we know it’s our responsibility to serve it just as well, using as many conservation and environmentally conscious practices as possible.”

The situation has indeed grown dire.

According to a 2016 report by NY/NJ Baykeeper, a nonprofit citizen action group for the New York-New Jersey Harbor Estuary, more than 165 million pieces of plastic float at any one time from Sandy Hook to the Tappan Zee Bridge.

And, according to Clean Water Action, a nonprofit environmental advocacy group, plastics — of which National Geographic recently reported only 9% are recycled — threaten not only wildlife and the environment, but also our health, as clogged storm drains lead to increased flooding and toxins are released into the air and water when plastics are incinerated or landfilled.

The costs are high, which means even higher monetary costs in an industry already coming up short, Alex Cormier, partner at Broadmoor Restaurant in Lambertville, said.

“Paper bags, for example, can cost four times as much — and costs already are high running a business today, especially with smaller profits and higher rents,” he said.

Still, Cormier added, he believes New Jersey and its businesses can meet somewhere in the middle.

More than 25 cities in New Jersey, especially those along the Shore, have either banned or placed fees on plastic bags and other plastic items since 2018.

“It’s going to happen, like it or not — towns are starting to ban plastics,” she said.

For example, Lambertville (by January 2020) and Monmouth Beach (since June 2018) have banned single-use plastic bags, polystyrene containers and plastic straws; Stone Harbor took it a step further by banning plastic utensils in June.

But such measures can grow confusing for businesses to follow, Marilou Halvorsen, president of the New Jersey Restaurant & Hospitality Association, said.

“Having each municipality (enact) mandates is confusing, since each ordinance is different,” she said. “There should be one state bill that addresses these concerns with the input of business and environmental groups.”

Funny she should mention.

Introduced in June 2018 and awaiting further action, a bill (S2776) would prohibit businesses from providing customers with plastic bags, expanded polystyrene products and plastic straws, with violators paying up to $5,000 for each offense.

“It will be interesting to see how far New Jersey goes,” Cormier said.

However, laws pertaining to the reduction of plastic already have been enacted or proposed in California, New York, Hawaii, Vermont, Maine, Maryland and Oregon, and the results speak for themselves.

For example, according to Clean Water Action, Los Angeles County’s ban on plastic bags reduced overall usage by 95% and paper bag usage by 30%.

“There is a cost element to this business, but there also is a commitment to the environment and the big picture, which affects our tourism in general,” Schlossbach said.

Schlossbach said her restaurant group’s own plastic ban has created quite a stir.

“We only use cans, glass and boxed water for takeout, which has caused quite an issue with Pepsi, the beverage provider for the Boardwalk,” she said. “They use a lot of plastic, which we will not use.”

But Schlossbach said she is not without options.

“Five years ago, there were maybe one or two companies manufacturing paper straws,” she said. “Now you can go to a big box distributor like Sysco or even on Amazon to buy metal and paper straws cheaper than I can get them, and a whole lot more recyclable and compostable products.

“The costs are coming down and there is a lot more product out there than there ever was.”

The cost is also not going to be as significant or hurtful as some places might think, Hirsch said.

“It is the cost of doing business,” he said. “Some years, the price of crabmeat goes up, other years, it’s lettuce. There’s always something in this industry, and that’s what makes it tough, but it also is what you prepare for.”

Though Hirsch said Harry’s Bar & Grille absorbed some of the costs for eco-friendly products into their prices, even their most loyal customers never complained they were taking advantage.

“They go to the beach all day and they understand the importance,” Hirsch said. “This is a way for us to reinvest in our environment, just as we might donate to various charities or host events with local organizations.

“We are just nearly 30 feet away from the beach and the ocean is our livelihood.”

Cormier, initially a skeptic of shelling out more for eco-friendly products, said it is something he quickly got used to.

“At first, you think it’s going to be a problem, but we’ve learned we can afford to purchase nice paper bags with handles,” he said. “It’s the people who own luncheonettes or coffee shops that might get hit in the pockets.”

Hailey Zaboski, community outreach coordinator for The Peccary, a 30-seat gourmet coffee shop in Millburn, said she could not disagree more.

“There are so many opportunities for growth and marketing by acting environmentally responsible,” she said. “With plastic bans coming into (play) around the world, now more than ever is the time to adapt.

“Although we are a little pricier than other non-environmentally-friendly businesses, our customer base is more supportive of our mission. People are starting to seek out businesses that align with their values, even if it is less convenient.”

Schlossbach said she agrees — and is looking forward to the day plastics are eradicated in New Jersey.

“A lot of people choose the places they want to spend their money by the things that are important to them, and a lot of people care about the environment and the cleanliness of the air they breathe and the water they drink,” she said.

Marilou Halvorsen, president of the New Jersey Restaurant & Hospitality Association, said that, while she understands the environmental concern, restaurants need to still be able to accommodate guests with disabilities and small children.

“Straws should be available upon request,” she said.

“You still need to cut down trees and the manufacturing produces some sort of emissions, as does the vehicle used to transport it,” Schlossbach said. “A straw is a luxury item to most, not a necessity.”

However, Schlossbach, who currently is on the executive board of the NJRHA, said there are ways to reduce costs when purchasing paper straws to have on-hand only when absolutely needed.

“If you’re a member of the Surfrider Foundation, for example, for something like $100 per year, you can get 20% off from Aardvark on their paper straws,” she said.

“You could join an organization as an environmentally-friendly company, get promoted and get a discount.”

Schlossbach said one of the things she’d like to accomplish as incoming chair of the NJRHA is to collaborate more with organizations such as the Surfrider Foundation.

“It’s very hard for our industry to implement things like removing plastic,” she said. “But offseason, when there isn’t a support staff to clean the beaches every day, we see the impact plastic has.

“Having organizations promote us gives us more credibility with the choices we make.”

Study: N.J. tops list of states with the worst roads