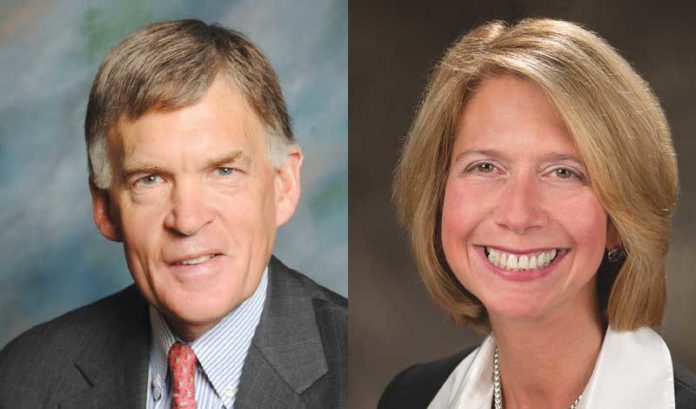 “We have outstanding relationships with labor, nonprofits and other associations,” she said. “We’re just saying, ‘Let’s get some of those folks riding with us.’”

New Jersey Chamber of Commerce head Tom Bracken makes another thing clear: Opportunity NJ’s economic plan is not demanding anything from the governor or the Legislature.

“We’ve met with the senior staffs of the governor and state Senate president and the (Assembly) speaker and went over the plan,” he said. “We told them what we were doing. We told them that we are not asking for an endorsement of the plan because we realize they might not like some of the plan.

“All we were asking is for them to acknowledge that these ideas are a good start and then we’ll go out, present the plan, get feedback from a grassroots level and present it to them.

“That’s all we ask of them. Nothing more.”

With this in mind, the Opportunity NJ co-leaders said they are working to establish an Economic Development and Advisory Council — a business-led council that includes diverse private sector stakeholders — to get more feedback.

The leaders said the goal of the group will be to periodically deliver information to state policymakers in order to advance a plan they feel will stimulate job and median wage growth while realigning the state for regional competitiveness and affordability.

The council will be chaired by and include representatives from the board of Opportunity NJ, as well as labor, not-for-profit organization leaders and key players in regional economic development organizations.

Among other things, the council will be charged with:

Bracken and Siekerka have a list of names they are planning on approaching, but welcome input — and suggestions — from all over. They hope to have an initial announcement in September.

“The idea of the council is just a way to formalize a liaison of the message that’s going out with boots on the ground and determining how we get that message delivered,” Siekerka said.

Bracken and Siekerka say the Opportunity NJ proposal combines ideas of the governor, the Legislature and business leaders.

Bracken said he knows they will never come up with a plan that satisfies all three parties, but they are hoping they can agree on items to get the state moving again.

“We have to turn the state around,” he said. “We have to start to get positive momentum because it’s going very quickly the other way.

“The state is becoming more divided. There’s no unity. And it can be devastating for our economy. And, really, it can permanently damage our ability to have any kind of recovery.”

Siekerka said she’s hopeful — because she’s seen it work in the past.

“Go back to (the Transportation Trust Fund and Forward New Jersey),” she said. “Those are examples of coalitions where folks came together.

“Obviously, our labor partners agree with us on the need for job creation and agree with us on the needs to have a skilled workforce in order to fill those jobs. This is an area where labor and business perform very well together. We add on to that the nonprofits and folks who are really struggling right now on affordability and there’s an absolute need for them to want to be at the table and share their stories.”

Here are some of the principal ideas included in the Opportunity NJ plan, which aims to allow New Jersey to lead its peer Northeast states in job growth and median wage growth by addressing:

Bracken said the plan is an honest assessment of where the state is — and where it needs to go.

“It is a combination of a forward-looking plan and an internally introspective look at the cost of government, tweaking some of our tax code and things like that to make us more competitive,” he said. “It will address, head on, the issue of us being less and less competitive.

“If just some of these ideas are implemented, it will impact the affordability of the state, be encouraging for companies who are here to stay here and really want to grow here, and possibly attract more companies to come here.”

More than anything, Bracken said, it goes beyond political rhetoric.

“There’s a lot of very positive aspects to what we’re trying to do,” he said. “One thing we’re not trying to do is be negative. There’s enough negativity out there and there are enough people out there banging tables and screaming about how corrupt business is.

Siekerka said it’s a desire to get back to the basics of economics.

“You have nothing if you don’t have jobs,” she said.