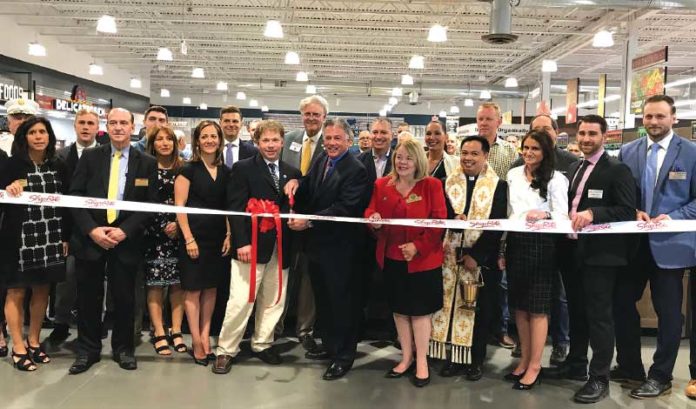 There has been a lot of activity recently in the Inserra Supermarkets camp, as the owner of 23 ShopRites and two Price Rite Marketplaces in New Jersey and New York just opened a new, built from the ground up, ShopRite store June 13 in New Milford. The new location, at 250 River Road, replaces a smaller store it had bought from another ShopRite owner and operated for over 40 years just down the road. Inserra had also opened a new store in mid-January of this year in the Bergen County township of Wyckoff, which was reported in our first-ever Food Fella Column in ROI-NJ’s Jan. 21 issue.

The new store features nearly 50,000 square feet of retail space and offers a broad array of groceries containing both private label items and national brands, as well as daily deliveries of fresh produce, including organic items that are locally grown and sourced from around the world.

“We are committed to bringing incredible value, superior quality and first-class services to our customers,” said Lawrence Inserra Jr., chairman and CEO, Inserra Supermarkets, and also No. 7 on ROI-NJ’s first Food & Beverage influencers list in 2019. “Most importantly, we will continue to support our local community, civic causes and charities that fight hunger and improve lives for those in need.”

With approximately 300 full- and part-time associates, the ShopRite of New Milford features a nice assortment of specialty departments, including: Health & Wellness, a full-service ShopRite Kitchen featuring hot bar, salad bar, cook to order grill and restaurant-quality prepared meals and sides. The store also features signature Inserra store departments such as a Bakery, Seafood and Patsy’s Butcher, with a USDA Prime Dry Aged Beef Cabinet and service counter. The latter is named for Lawrence Inserra’s grandfather, Patsy Inserra, who was a trained butcher and helped found the family’s leap into the grocery business 75 years ago.

The Health & Wellness department at the new store, called Dietician’s Nook, will be staffed by a registered dietitian who will provide free nutrition and wellness counseling to customers, associates and the community.

Under Inserra’s leadership, Inserra Supermarkets gives back to the community through a vast range of charitable endeavors, including hosting the annual June Golf Outing for the Carl Inserra Leukemia Fund, which was held on June 17 this year.

Even with the growth and success this family supermarket chain has experienced throughout the years, the thing I admire most is this: how Inserra Supermarkets actively and consistently provides outreach and support within the communities where it operates its stores. The company provides support to food pantries and other hunger-relief organizations, hospitals, public and private schools, and churches and temples, among many others. Some of the groups the Inserra family has helped include Hackensack University Medical Center and its Tackle Kids Cancer organization, the Diabetes Research Institute, the MS Center at Holy Name Hospital, local chapters of local law enforcement, fire and rescue teams, and organizations dedicated to the armed services and veterans.

We wish the entire Inserra family, their employees, our friends at ShopRite/Wakefern Food Corp. and all associated businesses much success at the new location. I understand there are more stores planned as demolition and building planning activity is underway for a new ShopRite of Wayne at the Wayne Hills Mall. The estimated time of completion and opening is in 2020.

It started as a humble idea from Ryan Krill and Chris Henke. During a summer weekend at the Jersey Shore, they brewed a batch of beer with Krill’s dad. Krill then posed the question, with some reservation, “Should we open a brewery?”

Well, by the following year, the three had secured some space at Cape May Airport, where they concocted a makeshift brew system and honed their beer-making skills. Then, in 2011, they started with one client. Today however, Cape May Brewing Co. deals with hundreds of accounts in New Jersey and Pennsylvania, proudly serving the award-winning recipes developed by these guys. And CMBC’s fearless leaders have never looked back. As a matter of fact, they are looking west!

“We’ve seen tremendous growth for Cape May across the Philadelphia five-county market,” said Christian Origlio, executive vice president at Origlio, “As summer gets into full gear, the timing couldn’t be better to expand Cape May throughout our entire footprint.”

CMBC Director of Sales Bill Zaninelli sees this as a logical next step in Cape May Brewing Co.’s expansion.

“The area has had an influx of folks from the five counties that are looking for housing in a country setting while staying in an area where they’re still able to commute to their jobs in the city,” he said.

“We’re thrilled to reach our fans in the Lehigh Valley and points south,” Krill, now CEO, said. “We’ve had a great relationship with Origlio Beverage in Philadelphia — they’ve done a fantastic job in helping us to expand throughout the city and the surrounding areas. Now, we’re ready to move points west — into an area that’s been clamoring for our beer.”

Cape May Brewing Co. products have been distributed in Pennsylvania by Origlio Beverage for four years, forging a tremendously synergistic relationship, benefiting both Origlio and CMBC.

“As our company grows, this expansion into the Lehigh Valley and Lancaster areas is a natural progression of our goals as a brewery,” Krill said. “We’ve got a great team in Cape May, ready to tackle any challenges thrown at them, and we could not have achieved this next step in our development without them.”

Residents of Northampton, Lehigh, Berks and Lancaster counties will begin to see Cape May IPA, Coastal Evacuation Double IPA, Always Ready Northeast Pale Ale, The Bog Cranberry Shandy and Cape May Lager on the shelves of their local beer distributors, bars and restaurants within the next few weeks.

Congratulations to the whole crew at Cape May Brewing Co., whose tremendous vision, effort and hard work to “start a brewery” have turned into a really good idea with many happy customers and fans, including the Food Fella! Much success with the westward expansion.

For more information about Cape May Brewing Co., including info on tours and tastings, go to capemaybrewery.com.

The Food Fella has learned that Imperfect Produce has officially set up shop in the Garden State with a new market warehouse in Moonachie that will allow the company to deliver to the surrounding region, including Newark, Essex, Hudson and Union counties as well as parts of Bergen County and also New York’s Staten Island.

The online grocer aims to create a more sustainable and effective food system by sourcing “ugly” and surplus produce directly from farms and delivering it straight to customers’ doors.

The facility currently has six local employees, with plans to hire more as it expands, and one of its local farm partners is Vineland-based Dandrea Produce.

“Our team is continuing to build relationships with local farmers, and we look forward to sourcing from them as the season progresses,” San Francisco-based Imperfect noted.

According to Imperfect, it can have a huge impact in the greater Newark area: “If just 2,500 residents sign up, the community would be recovering 26,450 pounds of produce each week and over 1 million pounds of produce a year.”

Customers of the service can fully customize their experience by selecting a box size from small to extra-large and opting for organic versus conventional produce, with prices starting at $12. The e-grocer also recently launched Imperfect Picks, a line of shelf-stable grocery items such as lentils, flour, quinoa and bread.

The company is also forming partnerships and working closely with food banks across the country, to increase access to good food in local communities while eliminating food waste and building a better food system. Since launch, Imperfect has donated more than 2.2 million pounds of produce to nonprofit partners and food banks.

Currently, only 20% of all U.S.-grown fruits and vegetables meet the strict cosmetic standards of grocery stores, with the result that 20 billion pounds of produce is unharvested or unsold annually. “We’re getting the produce that doesn’t meet the strict standards of grocery stores … that was getting left in the fields,” Reilly Brock, a spokesman for Imperfect Produce said. The fruits and vegetables have “cosmetic quirks,” he said, they don’t have bruises or dings or are old. But the items were being tilled back into the soil because the cost of labor to pick them was not worthwhile.

Imperfect’s expansion comes as some “ugly” produce initiatives appear to be losing favor with consumers used to more cosmetically appealing items, with such grocers as Price Chopper and Hannaford having discontinued the Misfits produce program last year. The company debuted a Baltimore distribution center last October, enabling it to deliver product from coast to coast. It also has a facility serving the Philadelphia market.

So, if you love your veggies, you’ll find a place in your heart and tummy for Imperfects’ selection of good, healthy produce. Remember, beauty is on the inside!

For more information go to: imperfectproduce.com.

New owner says Denville bakery staple Mara’s will be back in...