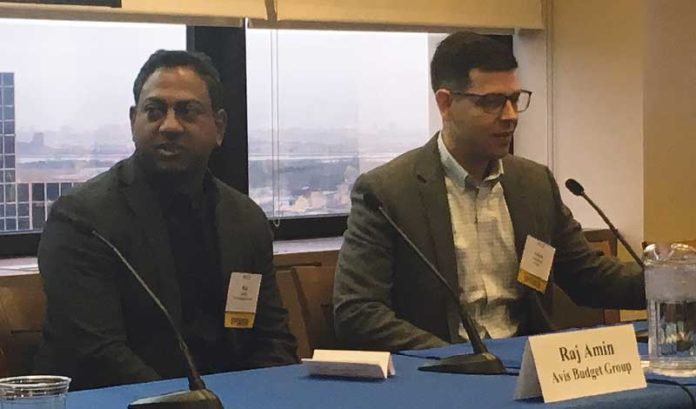 At the April Association for Corporate Growth New Jersey meeting called “Large Corporate Connects with Early-Stage Innovators,” startup founders got a glimpse of a real-life interaction between an enterprise like their own and a big company.

The candor was refreshing. Not everything goes smoothly when startups and large companies interact, but the results for both parties are often worth the effort.

The meeting was hosted by the Gibbons P.C. law firm at its conference center in Newark.

Introduced by Katherine O’Neill, executive director of the Jumpstart NJ Angel Network, Raj Amin, global managing director of mobility ventures at Avis Budget Group, based in Parsippany, and Adam Steinberg, co-founder and CEO of the startup Fetch Truck Rental, based in Atlanta, talked about how they managed to work together.

At the Avis Budget Group, Amin is often the first person who contacts a startup and gets it to work with the company.

It’s not easy to teach people how to be agile in large organizations, and that is where the challenges come in, he said. For example, if a large company has to change a process to work with a startup, that can be a problem. These challenges “can often stop you from moving into the next stage of innovation. Having people within the organization that can help with that, and push past those obstacles, has certainly been a critical success factor for us,” he said. What his company hopes to achieve, Amin added, is to make early-stage enterprises into true partners.

Fetch is a marketplace for self-service truck rentals, Steinberg said.

“If you’ve ever rented a car or a truck, and waited in line for the next person to serve you, well, we’ve cut out that entire line,” he said. “You book it on our website and never have to see a person.”

Fetch doesn’t own any trucks: “The technology is really between the customer and the fleet owner.”

“De-risking the startup” was Amin’s first step. While Fetch was working in an area that Avis Budget found interesting, the startup needed assets that it could bring to the table to help de-risk the opportunity. Budget had trucks, but that division had challenges, Amin said. However, it was more important to make sure that the startup founder was someone the company could build a relationship with and work with. In this case, the founder had had a previous exit, was personable and had a good team that could execute, he said.

As part of Fetch’s business model, “we needed companies that had vehicles that we could rent,” said Steinberg.

“I had been calling and emailing into ten different people at Avis Budget, trying to get someone on the phone that would give me 15 minutes,” he said. “It was challenging, because I’m sure they are getting that every day from 50 other startups that want to partner with them. By great luck, Raj had just started at his role at Avis, and our lawyer and Raj had a previous connection.”

Once Amin was comfortable with the use case and the founders, the next step was to get this idea vetted by the Avis Budget Group truck division. So, he asked Steinberg to put together a proposal for a trial run with Budget Truck Rental. When the proposal came in, Amin sent it on to the president of that division, who got back to him within five minutes to ask when they could set up a call.

From there, they had to get into the details. The two companies needed to figure out how they would pilot and how they would get a pilot agreement done. Even though Amin was new at Budget, they were able to take it from the first call in February to the pilot launch in June — a real accomplishment.

“That really speaks to the fact that Raj has the background in running early-stage companies,” said Steinberg. “And he realized that this is a startup. Time is our most precious asset.”

Avis Budget wasn’t the startup’s first customer or first partner. But it was the largest.

“We had a model. Let’s start here and see if it works. We had a clear ask on the next step,” he noted.

Amin said that startups have to figure out if they are ready to engage with a large entity: “We had to do some IT security reviews, for example.”

He warned startups in the audience, “If you aren’t ready for it, you don’t want to lose your opportunity because you tried to come in too early.”

On the positive side, the joint pilot launched in Orlando, Florida, and Steinberg was pleasantly surprised to see everything set up to scale, with 20 trucks and signage and everyone ready to help. That was a lot of vehicles for Fetch. The company ran into some customer and billing issues, but that turned into a plus. Fetch learned from the larger company.

“Their team had so much expertise that we could take and build into the technology and automate,” Steinberg said.

“We came up with some ideas we wanted to scale and plug into operations to handle reporting the way we needed to. Within a couple weeks, those ideas were in the next software push,” Amin said.

This was amazing to Avis Budget, as its internal information technology group could never respond that fast or flexibly.

Avis Budget eventually invested in Fetch — its first investment in an early-stage company. The investment had a SAFE note structure (“Simple Agreement for Future Equity”), and it presented some learning opportunities, as the financial group had to understand that the structure of financing for early-stage companies is different from that of later-stage startups.

While the relationship has presented some new commercial opportunities for Avis Budget, “a soft benefit was that it created a lot of excitement within the Budget Truck division,” Amin stated.

Keeping people who are innovative and talented inside large corporations is a tough challenge, and just getting some of those employees involved was a positive for the company, he noted.

App is designed to help restaurants streamline service — including split checks — and track customer data, too

Health Care
ROI-NJ Staff -
June 16, 2021
Charles Vannoy has been named vice president for patient care services and chief nursing officer by the Valley Hospital, it announced this week. Vannoy, an...

Health Care
ROI-NJ Staff -
June 16, 2021
In 2011, Englewood Hospital became one of the first facilities in New Jersey to offer a transcatheter aortic valve replacement procedure on a patient...

Health Care
ROI-NJ Staff -
June 16, 2021
John Sarno, a lawyer who has been a longstanding advocate for mental health causes since the beginning of his career, has been named to...