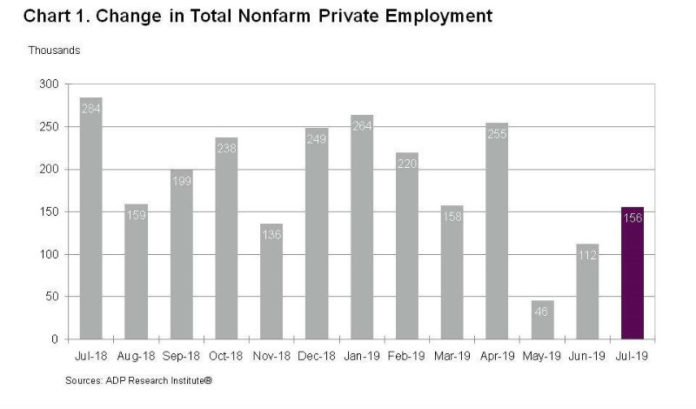 The nation’s private sector employment grew by a healthy 156,000 jobs in July, but is steadily decreasing, according to the latest report by Roseland-based ADP.

In the services industry, professional and business services was the top gainer, adding 44,000 new roles. Next up was education and health services, which saw a growth of 37,000 new positions; trade/transportation/utilities added 27,000, leisure and hospitality added 26,000; financial activities added 11,000; and other services added 6,000. The only industry to lose jobs in this sector was information, which lost 5,000 positions.

In the goods-producing sector, the construction industry added the most with 15,000 new jobs. Natural resources and mining lost 6,000 while manufacturing gained 1,000.

“While we still see strength in the labor market, it has shown signs of weakening,” Ahu Yildirmaz, vice president and co-head of the ADP Research Institute, said. “A moderation in growth is expected as the labor market tightens further.”

Industry
ROI-NJ Staff -
March 5, 2021
Executive Moves is an occasional feature on ROI-NJ.com describing some of the important personnel changes in the New Jersey business community. Reports are based...

Law
ROI-NJ Staff -
March 5, 2021
Joseph A. “Drew” Dickson has rejoined Chiesa Shahinian & Giantomasi as a member in its litigation group after serving for more than a decade...

Real Estate
Tom Bergeron -
March 5, 2021
Newark has so many of the qualities needed to be an industrial hotbed: access to the port, the airport, rail and road; a diverse...

Textbook definition of power: Murphy or Sweeney at No. 1? Esteemed...