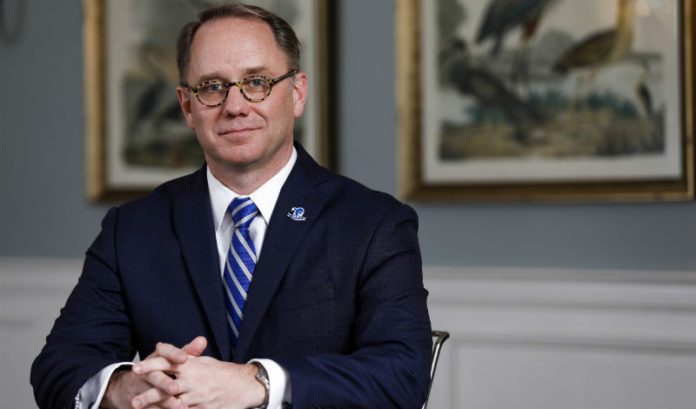 The university’s board of regents appointed Nyre in February after a national search. He previously served as president of Iona College in New Rochelle, New York.

“I take up the privilege of leading this great Catholic university with deep gratitude and boundless optimism,” Nyre said. “I look forward to working with the entire university community to enhance the transformational power of a Seton Hall education.”

Nyre, a devout Catholic, is a native of Wisconsin and a first-generation college graduate who has three advanced degrees and completed pre- and post-doctoral studies at the University of Missouri, University of Kansas and Harvard Medical School.

“We are excited to welcome President Nyre to Seton Hall,” Patrick Murray, chair of the university’s board of regents, said. “By combining the University’s academic excellence with his strong background in Catholic higher education and health care, we are confident that Seton Hall will continue its rise as a leading national university under President Nyre’s strong leadership.”

Nyre has practiced as a psychologist in academic, clinical and private settings while serving at several institutions, including Baylor University, the University of Illinois-Chicago College of Medicine and Harvard Medical School.

Mary J. Meehan served as the university’s interim president since March 2017. Next month, she will join the school’s College of Education and Human Services as a faculty member.