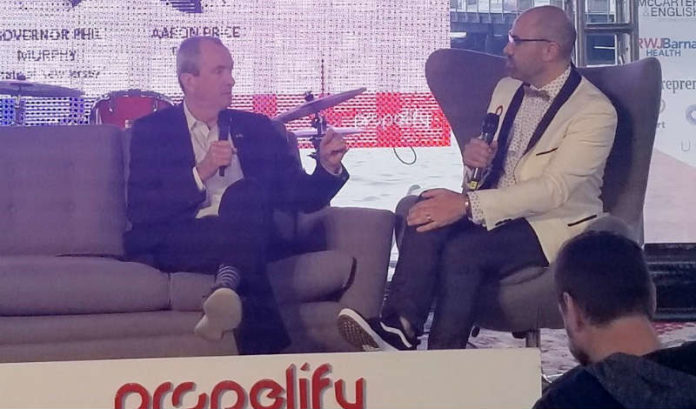 Aaron Price will be named CEO of the New Jersey Tech Council later Monday morning — and he’s bringing his global technology event, the Propelify Innovation Festival, with him, ROI-NJ has learned.

It’s a merger Price and NJTC officials feel will help bring together more of New Jersey’s tech ecosystem, helping New Jersey improve its national and global reputation as a hub for technology and innovation.

James Barrood, the former CEO, will remain as a special adviser.

“After three years of growing the Propelify Innovation Festival and things beyond Propelify, I was looking for a partner to grow,” Price told ROI-NJ. “After a few discussions, this merger made the most sense both for Propelify as well as for my own personal mission of elevating the state’s tech ecosystem and tech industry across the board.”

“As the leading authority for the tech ecosystem and economy, the council, together with Propelify, is in an even stronger position to set the innovation agenda and drive the conversation forward under Aaron’s leadership,” she said.

NJTC officials feel adding Propelify will strengthen its ability to serve the full spectrum of the state’s technology community in advocacy, business development, networking and education.

The NJTC represents 500,000 innovators, including representation from some of the largest tech companies in the country. Propelify brings to the NJTC many thousands of members of the state’s robust entrepreneurial community, along with educational content and experiential programming.

Price is eager to begin working together.

“I understand how important it is to have many ties,” he said. “And I think the combination of Propelify and the council gives us a lot more scale and reach across that entire ecosystem.

“I think there’s enormous power that comes with the ability of bringing the entire technology life cycle together. That’s what I’m excited about with the Tech Council. It represents some very powerful companies that I’m certain understand the role of the technology community, both early-stage and growth-stage companies. And I think, together, we’ll be able to really impact businesses and hopefully create some noise for New Jersey in the process.”

Price’s resume is impressive. He has served as the tech community expert for Gov. Phil Murphy, the New Jersey Economic Development Authority and the White House, during President Barack Obama’s administration.

Murphy, who has made building the state’s innovation economy a key component of his economic development plan, praised the move in a statement.

“Through Propelify, Aaron has shown himself to be a staunch advocate and vocal cheerleader for New Jersey’s technology community,” Murphy said. “With him at the helm, the New Jersey Tech Council will continue to elevate its mission as an advocate for New Jersey’s innovation ecosystem.

“I’d like to thank Jim Barrood for his stewardship of the organization over the past five years. Jim will continue to be an important voice in the technology community moving forward.”