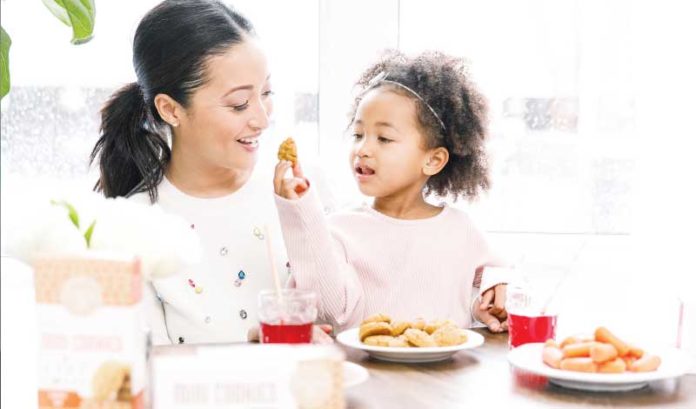 When Denise Woodard’s young daughter Vivienne was diagnosed with multiple food allergies, Woodard left her nearly decade-long career at The Coca-Cola Co. to launch an allergy-friendly snack company in Jersey City in 2017.

“I anchored around three components: delicious, nutritious and allergy-friendly,” Woodard said. “I felt if I could make my products taste better, have a better nutrition profile and also appeal to those without food allergies, those would be unique selling points.”

Woodard then grew the business nearly 300% in its first year — and is currently on track to surpass that growth this year after closing a $1 million seed round of funding in June with Marcy Venture Partners, the consumer-focused venture capital fund co-founded by rapper and business mogul Jay-Z, Roc Nation President Jay Brown and Silicon Valley veteran Larry Marcus.

“We are so excited to collaborate with the teams at MVP and with all of our partners,” Woodard, founder and CEO of Partake Foods, said. “They bring a wealth of knowledge in brand-building and scaling consumer companies.”

Then again, so does Woodard.

In 2016, when Vivienne was nearly a year old, Woodard was working as director of national sales in Coca-Cola’s venturing and emerging brands division.

“But Vivienne had something with eggs in it at her first Thanksgiving and we ended up in the emergency room, where she was diagnosed with a stomach bug,” Woodard said.

When Vivienne got sick after eating eggs again a few weeks later, Woodard and her husband had her tested for allergies, of which a few foods tested positive.

“Then we had another big scare around her first birthday after our doctor recommended we introduce her to peanuts,” Woodard said. “We gave her a puff snack that was made out of peanuts and corn oil — and, typically, they don’t test for corn allergies.”

With Vivienne suffering a severe allergic reaction, Woodard said she and her husband began their frustrating full-time journey into the world of allergen-free foods.

“We had access to every natural food store there is, but I was still having a hard time finding snacks that, while gluten-free or vegan, had lots more ingredients and sugar than I would have liked,” Woodard said.

When Woodard did find snacks with the right nutritional profile, Vivienne would spit them out, she said.

“Then, I learned that people with a restricted diet either by medical necessity or by choice often feel isolated and anxious, with a third of kids with food allergies even being bullied,” Woodard said. “I also started to realize how every fun thing revolves around food, from playdates to science experiments at school to birthday parties, and I started picturing our daughter as the kid with food allergies who constantly was left out.”

When Woodard shared her concerns with her nanny, she suggested Woodard start her own company.

Her first days as an entrepreneur were not what Woodard thought they would be.

“Initially, I very arrogantly went and spent hundreds of dollars at Whole Foods, thinking I could create some magical formulas myself, but that did not happen,” she said.

Instead, Woodard focused on launching a successful $30,000 Kickstarter campaign in November 2016, while a gluten-free baking influencer helped her develop cookie recipes.

“While they were great, they ended up not being commercially viable,” she said. “It was a big learning curve to then have to find and work with a food scientist who could find healthy ingredients and also a process that would work better for mass production.”

Woodard said she also would learn that the only allergen-free food manufacturer in the country that could help scale the company was located on the West Coast — and typically did not work with startups.

“Convincing them to work with me was one of the biggest challenges I had in getting the company off the ground, but I did, and they’ve been a fantastic partner ever since,” she said.

Woodard said she began selling the cookies in August 2017.

“I sold cookies out of my car for six months, demoing every day and meeting store mangers and customers,” she said. “We also raised a small friends-and-family round to support our launch into Whole Foods and Wegmans.”

Partake’s mini-cookies are gluten-free, vegan, non-GMO, kosher and devoid of gums, emulsifiers, sulfites and the top eight allergens — wheat, tree nuts, peanuts, milk, eggs, soy, fish and shellfish. They can now be purchased on Amazon.com and in hundreds of stores, including Whole Foods Markets and Wegmans, for an average retail price of $5.50.

By the end of this year, Woodard said she expects to be in more than 2,000 stores, with more investments from The Factory, a venture capital and private equity firm, and a few other consumer-packaged goods executives, including Chuck Muth, chief growth officer at Beyond Meat, also helping the company make big adjustments.

“For example, we are changing to regular-sized cookies next month,” Woodard said.

“But with our new packaging, carrot oat will become carrot cake and sweet potato millet will become ginger snap,” Woodard said. “We found as much as consumers say they want to be healthy, when they are looking for a treat, they actually want a treat and those names can be slightly off-putting if they question what a millet is or why they would want their cookie to taste like a carrot.”

Woodard said Partake also is coming out with one-ounce, single-serve packages for lunchboxes, airports and coffee shops, and a few flavors of soft-baked cookies.

“As a food allergy mom, I often ask, “What are the things I wish we had but we currently have terrible options for?’ ” Woodard said.

Though one thing will never change, she added.

“Every single product we develop, my daughter will taste-test it,” Woodard said. “We won’t put anything in our products that I wouldn’t feel good about sharing with my family.”

With its recent investments, Partake will be better able to create, market and distribute new meal and snack options outside of cookies, Woodard said.

But the biggest benefit will be building out a team of at least four employees, as Woodard currently is a full-time solopreneur.

“When I speak with potential vendors and they ask who handles marketing, accounting and logistics, I have to tell them I do — I do all of that,” Woodard said. “I have had to learn a ton about each facet of the business as well as how to be much scrappier with resources.

As things get tougher, Woodard said she is reminded by the royal blue tang in her daughter’s favorite Pixar movie to “just keep swimming.”

“Running a business is such a roller coaster — there are so many highs and lows that you just have to remain as even as possible,” Woodard said. “We do this by not letting any losses get us down and by continuing to celebrate even the smallest of victories.”

Denise Woodard said she used to think she was busy.

“Now, I look back and think of all the free time I had,” she said. “Running a business is all-consuming. It’s always on your mind and you are always getting emails, so you can’t ever turn it off.”

Still, while 16-hour workdays seven days a week are not uncommon, Woodard said her family is still her biggest priority.

“Sometimes my workday has to start at 4 a.m. so I can take my daughter to school and I keep working when she goes to bed,” she said.

While self-care and social activities certainly have decreased, Woodard said it has been worth it to see her 4-year-old daughter appreciate her for the hardworking businesswoman she is.

“Vivienne’s favorite game to play is entrepreneur, where she sells me ice cream or toys or leaves and twigs at the park,” Woodard said. “It’s cool to see just how much she is picking up from watching me run the business.”

Denise Woodard said that, while she currently works out of her home office in Jersey City, company headquarters will not relocate elsewhere once the team expands.

“Our first accounts were in Jersey City and Hoboken, with local coffee shops and natural food stores,” Woodard said. “This community has been so welcoming and supportive, and I have found many likeminded early-stage businesses and successful mentors, here, too.”

As well as a community of other female entrepreneurs.

“I’m even more of a feminist now because I’ve seen all these badass women create products to solve problems that either they or a loved one experienced,” Woodard said. “It’s been so refreshing to meet and speak with other women entrepreneurs, and so as we continue to grow, I’d also love to help coach others on some of the things I’ve learned along the way.”