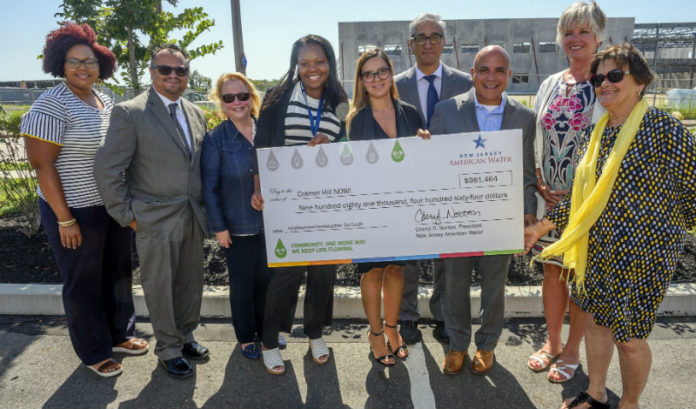 The $981,464 Neighborhood Revitalization Tax Credit grant will fund revitalization projects in the area, which include improving of the River Avenue Business Corridor, promoting continued business in the area, transforming vacant structures into new housing, employing two new ambassadors and helping promote Cramer Hill as a safe neighborhood to live, work and play.

“Today’s announcement marks another significant investment in Camden, specifically the Cramer Hill neighborhood, by New Jersey American Water,” Camden Mayor Francisco “Frank” Moran said. “The 2019 Cramer Hill NOW! Plan focuses on those who are living and working in this vibrant community. This investment will directly benefit those businesses operating within Cramer Hill’s commercial corridor and will continue to spur positive change within this growing neighborhood from both a social and economic perspective.”

The NRTC program was designed to revitalize distressed neighborhoods in New Jersey. Funds are used by neighborhood-based nonprofits that have received approval from the New Jersey Department of Community Affairs for a revitalization plan in a neighborhood they serve.

“We are excited that Camden’s Cramer Hill neighborhood is once again receiving the resources it needs to keep moving forward on the path to revitalization while providing residents enhanced community programs to help them live a better quality of life,” Lt. Gov. and DCA Commissioner Sheila Y. Oliver said. “Governor Murphy and I know that significant change takes time and we are thankful that New Jersey American Water and the Cooper’s Ferry Partnership have been in it for the long haul by investing in this Camden community for nearly a decade.”

This year, NJAW selected the 2019 Revitalization Projects from the Cramer Hill NOW! Plan spearheaded by Cooper’s Ferry Partnership, a Camden-based economic development authority, as the benefactor of its NRTC grant funds in partnership with Camden-based St. Joseph’s Carpenter Society and the Camden Special Services District.

“Cooper’s Ferry Partnership has a longstanding history working with the resident and businesses in Cramer Hill and these improvement projects help to ensure that the Cramer Hill neighborhood continues to flourish for generations to come,” Kris Kolluri, CEO and president of Cooper’s Ferry Partnership, said. “With New Jersey American Water’s generous support, we are making remarkable strides towards the revitalization of this neighborhood and the City of Camden as a whole. This is a perfect example of all that can come from innovative partnerships, strategic vision and a shared commitment to enacting positive change.”

Since 2010, NJAW has contributed more than $6.6 million to local community projects through the program and approximately $5.7 million of that total was for initiatives in Camden.

Finance
Tom Bergeron -
May 7, 2021
The state will make an additional $235 million in funding available to Phase 4 of the Small Business Emergency Grant Program, the Legislature and...

Finance
Tom Bergeron -
May 7, 2021
Gov. Phil Murphy announced Friday that the state will allocate $40 million in federal funds for New Jerseyans who have previously been ineligible for...

Real Estate
Tom Bergeron -
May 7, 2021
The Centers for Disease Control and Prevention’s residential eviction moratorium was held to be invalid Wednesday by Judge Dabney Friedrich of the District Court...

Finance
ROI-NJ Staff -
May 7, 2021
Sax LLP, the Parsippany-based accounting, tax and advisory firm, has added a new Investment Banking Practice as part of a new service launch, it...

J.P. Morgan’s DeMetropolis: Get defensive — even if recession isn’t coming...