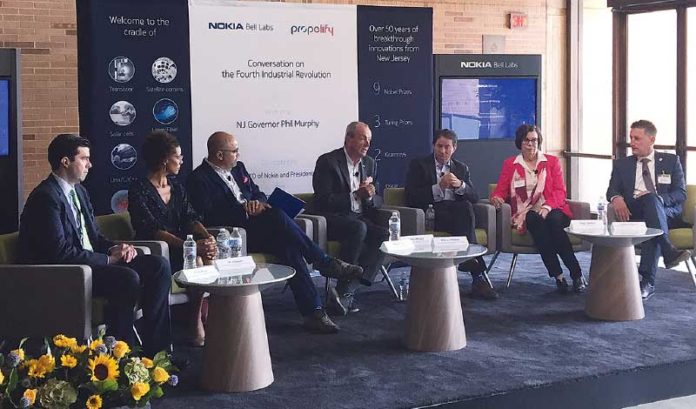 Marcus Weldon says it’s the one thing that still bothers him — the one puzzle all the brilliant minds at Nokia Bell Labs can’t seem to figure out.

Bell Labs is alive and well. It is the present and the future, and not just the past. It is arguably the most important tech center in the country (I’ll explain later).

And it is, Weldon admits, one place in New Jersey’s ecosystem that is frequently overlooked.

“It rankles me a bit,” Weldon, president of Nokia Bell Labs and chief technology officer of Nokia, said. “I’ve been running Bell Labs for five years and I have not solved that problem.”

Events such as the one Bell Labs hosted last week at its Murray Hill headquarters are just one of the ways the company — and the state — is trying to change that.

Weldon took the stage with Gov. Phil Murphy for what they called an innovation conversation on the fourth industrial revolution. They were joined by a host of other top technology and investment leaders in the state, including Assemblyman Andrew Zwicker (D-Monmouth Junction), Golden Seeds founder Peggy Wallace, Economic Development Authority head Tim Sullivan, Institute for Entrepreneurial Leadership CEO Jill Johnson and the newly appointed CEO of the New Jersey Tech Council, Aaron Price.

They all pledged to do more to make New Jersey a greater center for technology and — more importantly — said they needed to “shout out” the fact that the state already is.

“The state doesn’t shout loud enough,” Weldon told ROI-NJ after the panel discussion. “Because we’re associated with this location, that location needs to shout with us. So, I actually do think the idea of New Jersey shouting louder and saying these companies are here is important.

“Not being able to get previous governors here I thought it was astounding. Why wouldn’t you run a quick commercial (as part of a) New Jersey PR marketing campaign that says Bell Labs is here and Bell Labs is the inventor of the internet?

“I think we need to fix this, and I think we’re in the processing of fixing it.”

That goes for his own group, too.

“I think the problem we’ve had is perhaps we haven’t marketed in the right way to the right audience,” he said. “We use social media, but we were late to that game. Now, it’s a noisy space. We’re trying to find new ways where we induce people to recognize that we are not only present, but we are the future.”

Weldon rattled off a host of ways the company is reaching out, sponsoring robotics competitions, the New Jersey Science and Engineering Fair, providing scholarships — most specifically at a program with Stevens Institute of Technology in Hoboken.

Weldon knows that technology talent is in the state, speaking highly not only of Stevens, but New Jersey Institute of Technology, Rutgers University and Princeton University.

“We’re going out in new ways to try and find talent,” he said. “We have an art and technology program, which now goes nationwide, because we want art tech people because they also have brains that we need. So, I think we’ve done a lot of sort of small, stealthy things, but we haven’t yet got the grand unifying theory of how to attract.”

The work still being done at Bell Labs should be more than enough. It’s not just its collection of Nobel Prize winners (which stands at nine), but the potential to add more.

“We’ve made a massive amount of investment in 5G technologies,” he said. “Everyone thinks 5G is done because service providers are beginning to say it’s launching, but, in fact, the reality is that it’s only phase one — and the very rudimentary phase.

“All the new, exciting technologies, including beam forming and millimeter wave and sensory technologies and massive (Internet of Things) and cloud technologies, they’re still to come.”

And, for all the talk about companies leaving New Jersey, Weldon reiterated why New Jersey still makes sense for Bell Labs.

“We’re staying,” he said. “Obviously, every time we look at this property, we say, ‘It’s a big property,’ but we never say, ‘Leave.’ We say, ‘Rejuvenate it, reimagine it.’ But we’re staying and I have to give the company credit, we’re a Finnish-headquartered company.

The state certainly fits what Bell Labs is working on, Weldon said.

“New Jersey is a manufacturing place, it’s a place of agriculture, pharma and biotech and transportation, infrastructure and logistics in all its distribution centers,” he said. “All of those are the sectors and businesses that will be transformed by the next phase of 5G — and we’re working on this technology increasingly by forming partnerships across the state.

“We’re finding willing partners who will adopt a 5G technology in a way that perhaps a service provider wouldn’t be deploying it because they’ll take that 5G technology inside their building. We call it private networks. And I think there’s a big new opportunity for industries and infrastructure to adopt private networking technologies based on 5G that will transform how they operate.

“Machines will be able to dynamically reconfigure people, be in contact with those machines and controlling them using natural motions. And yes, maybe even with their brain or their mind.”

Weldon said the next big announcement at Bell Labs will come in December.

“We have a project called Mirror X, which is a project about building the AR overlay for the entire world and to drive industries, not just to drive consumers,” he said. “It is the future. It is about an industrial internet, industrial information, industrial control systems.

“To me that’s super-exciting. For too long, (technology has) been focused on the consumer. There’s nothing wrong with that, but it’s not where the revolution is. The revolution is digitizing our physical world.”

And it’s being done in New Jersey.

Why saving transit will help save our economy

EDA investment has been part of watershed transformation of Camden —...