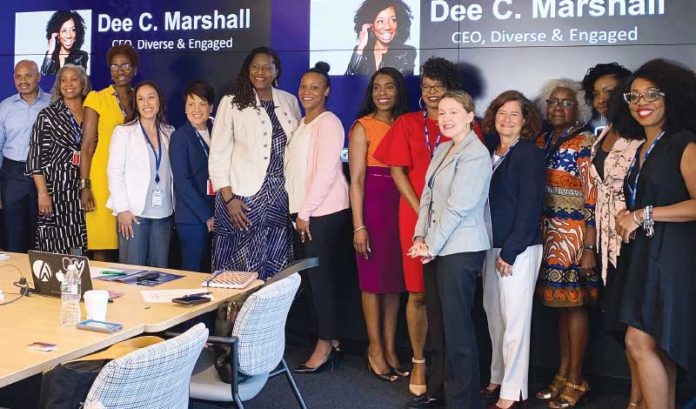 There is no doubt a business case for diversity and inclusion, Dee C. Marshall said.

“That is a good reason to make diversity and inclusion a priority,” Marshall said.

But Diversity 3.0 also brings with it new levels of accountability and reputational risk, she added.

“As a result of the highly social and digital world we live in, if a culturally insensitive advertisement is released on Tuesday and the public does not like it, it may be pulled within 24 hours (but still) cost the company millions,” Marshall said. “It also is now regular practice to call corporate leaders to provide testimony at congressional hearings to justify their decisions and business strategies.”

That is why Marshall, CEO of Diverse and Engaged, a Newark-based leadership development consultancy, said she largely focuses on workplace culture and diversity with her clients, many of whom are executives at Fortune 500 companies.

In fact, Audible in Newark hosted Diverse and Engaged’s most recent Corporate Insiders and Influencers event, an executive roundtable designed to share knowledge on topics and trends in talent management and leadership development.

And this time, diversity and inclusion — or what Erika Mercedes, head of spectrum and belonging at Audible, called more “traditional” terms — would be front and center.

“We want to build on the great work that already has been done here, but we also want to think and talk about what can be done differently moving into the future,” Mercedes said. “We are here to celebrate the glories of the human spectrum in order to help make people feel like they belong.”

Marshall began the discussion by noting key drivers of diversity and inclusion today.

For example, she said, there has been a reprioritizing of gender diversity stemming from the recent #MeToo and #TimesUp social movements.

“When businesses began reacting to sexual harassment, (they also began to focus on) promoting more women — especially to corporate boards,” Marshall said before citing a recent California law requiring publicly traded companies to have at least one women on their board of directors by the end of this year.

Marshall also implicated the increased accountability at the demand of consumers and the government, citing a controversial Pepsi advertisement starring Kendall Jenner that trivialized protests against police brutality toward black people and Mark Zuckerberg’s recent congressional hearings regarding Facebook.

One executive in attendance agreed, stating how no one ever called them proactively.

“It’s usually because something has happened at my firm — an issue that needs to be quickly resolved,” they said.

Another said accountability was especially important to keep in mind when working with multicultural and international corporations.

“It can then up to the employees to be the ‘police,’ to point out instances that are insensitive,” they said.

Such actionable insights can help companies overcome biases in their systems, attendees agreed.

“For example, are there inherent biases that exist in the way we hire and develop our people?” one executive said.

Significant changes to hiring practices, such as more diverse application questions and interview panels, had been successful at some companies.

“I cannot stress enough the importance of diverse interview panels, not only when it comes to race and gender, but also age and perspectives at the table,” one executive said.

But the majority of executives in attendance said while the work is most certainly being done at their companies, most still feel “behind the times” and unable to reach the appropriate benchmarks.

“What is the best way to measure success and what does that truly look like in this work?” one executive asked. 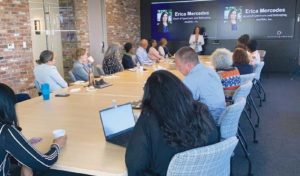 However, applications are time-consuming — therefore, several companies recommended becoming laser-focused in their choice.

“Our company is fairly gender-balanced, for example, so we went all-in on that measurement and applied mostly to lists that focus exclusively on the best companies for women,” one executive said.

Then there was the executive who said they work for a company that consistently makes all of the lists, but getting women and minorities into senior leadership roles is still an issue.

“With all that we’ve done and review and discuss, the challenges seem to remain the same,” they said. “We might make a bit of progress for a few years, but when it begins to look the same year after year, that clearly impacts our company.

“We need to know what the practical solutions are to actually moving the needle.”

Marshall said that, while not all diversity programs fail, she has found a vast majority of those not having a desired impact do not get executive leadership involved; do not make diversity and inclusion a direct part of their business strategy; and/or do not give their diversity and inclusion leaders the authority nor budgets to drive real change.

“When it comes to the challenge of getting executives, and more specifically, white executives on board, we, for example, have a Men as Allies and a Diversity and Inclusion Champions program that can help them, in a safe space, build their inclusive leadership muscles,” Marshall said. “However, these kinds of programs often fall under learning and development or employee resource groups, both of which are often (underfunded).”

That often can result in a Catch-22, one executive said.

“When you approach senior leadership regarding diversity and inclusion measures, you can’t just bring the data — you must bring them results,” they said.

So, the question remains: Where do companies go from here?

“We’re following all the best practices and looking at the organizations that we partner with and the events we attend, but it’s like boiling the ocean, and we are still very much at the beginning,” one executive said. “We need to continue educating the individuals out on the front lines.”

What if, however, you already have been doing that, one executive asked?

“How do we raise our game in this space?” they said. “We have all the business resource groups, engaged leadership, the retention and acquisition of diverse talent on boards — sometimes, it feels like, ‘Been there, done that.’

“But the needle has not moved as far as we would like it to. So, what’s next?”