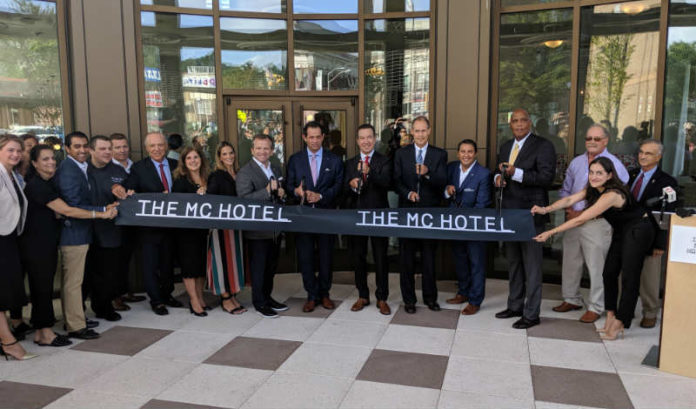 James E. Hanson opened with an old, yet popular, African proverb whose origin has never been pinpointed.

“It takes a village to raise a child,” said Hanson, CEO and president of Morristown-based real estate company The Hampshire Cos., to the gathered crowd of employees, investors and city officials in Montclair. “To do any successful project, it takes an entire community.”

Hanson was speaking at the ribbon-cutting ceremony of Montclair’s new MC Hotel on Thursday. It’s the first full-service hotel to open in the city since 1939 and the first East Coast property for the management company, Aparium Hotel Group.

“The MC Hotel will be a one-off brand that will dominate the state’s hotel market,” said Aparium Chief Operating Officer Todd Cilano. “We hope this is the first of many East Coast properties for us.”

“Montclair is filled with homegrown pride that champions local artists and creative minds,” Cilano said. “These are all attributes that establish the spirits of our hotels.”

Morristown-based investment service Circle Squared Alternative Investments was also part of the project. The company’s CEO and president, Jeffrey Sica, spoke about the excitement he and his company felt when first approached about the opportunity.

“When Hampshire and Hanson came to me and asked me if I wanted to participate in this, I don’t think they were able to even finish the sentence before I said, ‘We’re in,’” Sica said.

A similar excitement came through when the hotel’s general manager, Oscar Fontana Roos, came out to speak to the crowd.

Montclair Mayor Robert D. Jackson touched on the history of the area where the MC Hotel now stands and how much it’s changed.

“Across the street, there used to be a (Public Service Enterprise Group) customer service center and a bowling alley,” Jackson said. “And where we are now (where the hotel is) used to be a gas station.”

But with this transformation comes a new chapter in Montclair’s history.

“The MC Hotel is a transformative project that really helps to define who Montclair is as a community,” Hanson said. “Not only for this generation, but for generations to come.”

Brian Stolar, CEO and president of the Pinnacle Cos., another partner on the project, said his company broke ground on the 159-key hotel back in spring 2016.

The hotel also is home to Allegory, a contemporary New American restaurant, and a rooftop lounge and bar set to open in the fall.