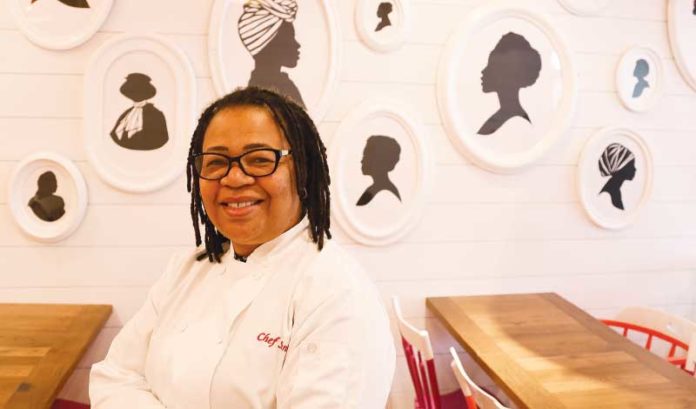 Her passion for cooking always was there, Sandra “Sandi” Rogers said.

“I’ve always had the dream of opening my own soul food restaurant,” she said.

She simply needed to wait for the right opportunity — which came in the form of a major lottery win nearly a decade ago — and the right time to open Sandi’s SoulBites.

“Soul food is a cuisine that Morristown currently does not have, and I want to be the first to bring it here again,” Rogers, owner and executive chef, said.

Though Sandi’s will officially open in August, the family-owned and -run restaurant has been in the works for nearly five years, she added.

“It’s been a long time coming for those in the know,” Rogers said.

But the trials of being a first-time restaurateur are no matter to her.

“My whole life has been a challenge and filled with obstacles that I’ve had to overcome, so, whatever comes my way, I can figure it out,” Rogers said.

“I’m just super-excited that this is finally happening.”

“To start, I found myself in and out of group homes after being out on my own since the age of 9,” she said.

At age 14, Rogers said she moved from Tompkins projects in Brooklyn, New York, to live with her grandparents in Statesboro, Georgia, where she learned to prepare and cook recipes created by her grandmother, then a private chef for Georgia Southern University.

“Everything I know about cooking, I learned from her,” Rogers said.

Rogers then moved to Staten Island, New York, to start a family, she added, but ultimately found herself raising five children as a single parent while working multiple jobs, including service management at a car dealership, catalog orders and certified nursing assistance, to put food on the table.

“Still, my house was the one everyone would come to eat at,” she said.

That is, until she and her children were forced to flee to a domestic violence shelter provided by Jersey Battered Women’s Service in Morris Plains more than two decades ago.

“I found work with the Morris County Sheriff’s Office and the Morris School District, and we’ve been here ever since,” Rogers said.

Even after she won the New Jersey Lottery in 2010, cashing in a Powerball ticket for nearly $101.6 million.

“That was an incredible blessing,” she said.

One that allowed Rogers to focus on philanthropic efforts from Morris Township to Uganda while watching her children grow up.

“But, then, I went through a divorce a few years ago and needed to find my own footing,” she said.

Rogers said she decided to attend culinary school at the Institute of Culinary Education in New York City despite any hesitations.

“The age difference between me and my classmates was not much to overcome,” she said. “We still became friends and it was a lot of fun.”

The self-proclaimed introvert said even driving to and from the city every day became easier with time.

“Culinary school was one of my greatest achievements outside of my children, and that certainly wasn’t going to stop me,” she said.

What was challenging, Rogers said, was having to unlearn many of the things she previously had been taught.

“Like how I don’t measure anything,” she said. “My grandmother taught me to simply eyeball ingredients, but that was not going to fly in culinary school.”

Rogers said she also learned quite a lot about running her own business and, over the last five years, has been putting that knowledge to good use.

In the beginning, Sandi’s SoulBites was a soul food catering business in Boonton.

“But, we were losing money to rent because we didn’t have a commercial kitchen,” Rogers said.

However, she and her family had purchased several commercial and residential properties in Morristown after winning the lottery, including 51 Bank St., where Rogers previously planned to build a dance studio.

Instead, Rogers said that is where she would originally have liked to locate Sandi’s, despite an adjacent business owner’s opposition to the restaurant over several years.

“Still, the one thing I’ve always been able to count on is my perseverance and resilience,” she said.

Rogers said she also wasn’t going to wait for that issue to be decided in court.

For nearly a year, she and her team have been working to bring Sandi’s to fruition in a rented space at 82 Speedwell Ave.

“I’ve learned a lot about patience and tolerance,” Rogers said. “But the goal is ultimately to use this location to develop our clientele before relocating to Bank Street.”

The current location seats 56 and, Rogers said, in addition to her five adult children (ranging in age from 24 to 33), she is hiring a staff of at least 10.

“I want this to be a place where people can come and feel like they’re eating dinner at home or at my own kitchen table,” Rogers said.

“I take pride in my creativity, taking traditional recipes and turning them into dishes that people typically would not expect,” Rogers said.

Rogers said she not only is excited to finally achieve her dream but to continue to help others with theirs as well.

That is why philanthropy will continue to play a part at Sandi’s, with a percentage of the profits from each dish sold being donated quarterly to various community organizations or families in need.

“We put our hearts and souls into bringing this all together and that’s what I want people to experience with our food,” she said. “I want people to sit down and eat and feel like they did when their mom or grandmother put a dish on the table in front of them.

“I want them to know it was prepared with love, soul and care.”

“It can be very difficult for female chefs within the male-dominated restaurant industry,” she said.

Still, Rogers said she is proud to be a part of it.

“I even have the idea of starting a network for female chefs in the area because I rarely see any of us out there,” she said.