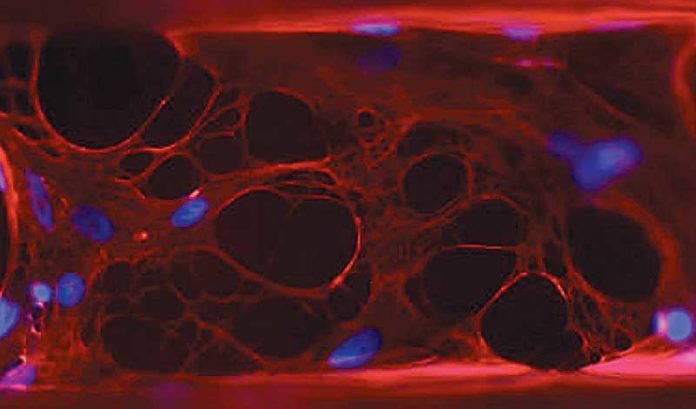 Lying at the bottom of a petri dish, hidden from the naked eye in a New Jersey lab somewhere, you’re bound to find cells flatter than paper.

These aren’t the same cells found in the human body, according to Wing Lau, CEO of a Bridgewater biomedical engineering company.

“Most people probably haven’t considered it too much, but a cell inside the body is growing in three planes,” he said. “A 2D cell culture doesn’t reflect an actual cell in the human body, but it’s the most widely used cell culture technique.”

Lau’s 3D Biotek LLC is adding another dimension to the cell cultures a lot of life science companies still rely on. As its name implies, develops 3D cell culture devices; those devices are used in drug discovery, tissue engineering and stem cell research.

“When you get a 3D culture, you’re a step closer to having something more realistic to work with — an in-vivo cell growth environment,” he explained.

This culture technique is still relatively new to the industry, he added, even if the 3D cell culture capability itself isn’t a new discovery. The company has been working on 3D cell culture devices for researchers since its founding in 2007.

But 2D cell cultures, which have been used since the early 1900s, are still seen as more convenient and sometimes less costly by researchers — hence, their use being far more widespread.

That could change if scientists continue to publish better results from using 3D cell cultures to study interactions between therapeutic agents and cells in drug development. Lau expects the use of these cells to decrease the overall pharmaceutical product development cost and shorten the time to market.

In the meantime, 3D Biotek is exploring application of these culture techniques outside of just the research context. Its newly released product, called the 3D Cell Expansion System, enables large-scale stem cell expansion that can be used in bio-banking, protein production and stem cell therapies.

Bio-banking includes the storing of umbilical cords for the abundant stem cells in those once-discarded tissues. Protein production involves the use of stem cells in cosmetic products such as anti-aging creams.

Lau sounds particularly excited about the system’s use for emergent stem cell therapies, even if the United States does not allow stem cell treatment if the cells are altered in some way. But it is being done in some parts of Asia. Lau near end of July traveled to a hospital in Shanghai that’s already investigating the use of these therapies.

“Eventually, this is going to be a huge market,” he said. “We’ve seen some cases in which stem cell treatment was used on an investigational basis and accomplishes some amazing things, like helping someone who cannot walk be able to walk again.”

The local company’s current goal is to expand its novel system’s max capacity, which is about 500 million cells for each of its production runs.

“We’ve been approached by some users who would like to have something that can handle more like 20 billion cells per production run,” he said. “So, I think in this field of cell manufacturing we still have a lot more work to do to deal with demand, which is a good sign.”

Oroho: No need to slow-play reopening, businesses (and customers) will do...