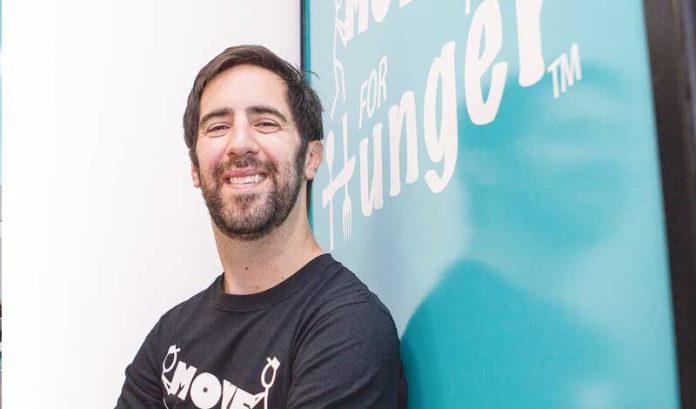 Max and Adam Lowy could have joined their family’s 95-year-old, multimillion-dollar moving company in Neptune from the get-go.

Instead, they both went into marketing.

“Then we started noticing how much stuff was being disposed of during the moving process,” Max Lowy said.

“Even though we weren’t working at Lowy’s Moving Service, we asked our dad if we could ask customers to take their unopened pantry items to the local food bank, or what is now Fulfill,” he said.

In a month’s time, they collected 300 pounds of food.

“And the customers really liked what we were doing because it didn’t cost them anything extra,” Lowy said.

That’s how, nearly 10 years ago, the Lowy brothers co-founded Move for Hunger in Red Bank, where Adam Lowy currently is the executive director.

And he invites all of its competitors to join Move for Hunger’s nationwide platform.

“We understand that doing good is good for business, and so we want our network of moving companies to promote this within,” Lowy said.

That decision, he added, is just one of many that has led to the family business’s continued success.

But the business was brought to new levels with each generation hired.

“When my grandfather joined, they bought more trucks and hired more employees,” Max Lowy said. “Then, when my father and two uncles joined, they got bigger jobs on both the household and commercial side — making the company one of the largest movers in the state.”

Though Lowy said he worked in the family business every summer since he was 14, he instead began his career in marketing with companies such as Versace and Caesars Entertainment Corp.

His brother, Adam, also was working in marketing for clients such as Mercedes-Benz when the pair noticed and took action against how much food was being disposed of when their family’s company moved both residences and businesses alike.

“We figured everyone was doing something like this, but, when we researched it, we found out no one was,” Lowy said. “Our moving company asked a simple question and was able to deliver 300 pounds of food — what if every single mover out there asked the same question?”

So, the brothers launched Move for Hunger and Max Lowy became the development director, working to create strategic partnerships with other participants in the relocation industry, including other moving companies, major van lines, corporate housing providers and real estate companies.

“We knew nothing about nonprofits but decided this was a good and easy thing that easily could be replicated within the relocation industry,” he said.

Today, more than 985 moving companies in all 50 states and Canada are involved and have collected and delivered more than 15 million pounds of food to local food banks throughout North America.

“When Lowy’s picks up 3,000 pounds of Gatorade left over at the New Jersey marathon to deliver to a local food bank, for example, Move for Hunger is able to track and report back to us on a monthly basis how much we’ve collected,” Lowy said.

Moving companies involved with Move for Hunger can then send out news releases with that sort of information, he added.

“They also connect other businesses with local Move for Hunger moving companies to handle the delivery of boxes, the pickup and delivery of food, marketing and more for events such as food drives,” he added. “Otherwise, the food bank would have to spend money to do all that when they could instead be providing meals with those funds.”

Move for Hunger currently employs more than a dozen full-time, as well as between one dozen and two dozen college interns at any one time.

But Max Lowy no longer works full-time with the nonprofit he co-founded.

Instead, he joined his cousin in representing the fourth generation at Lowy’s Moving Service nearly four years ago.

“Once I jumped back into the relocation industry with Move for Hunger, I felt there was some definite potential to help grow my family’s business to another level,” he said.

“We’re doing a ton more disposal these days, especially when a 700-person office moves,” Lowy said. “But we work with and reach out to a lot of charitable organizations, including schools and hospitals, prior to disposing or recycling the items, because it’s typically really nice stuff that a company simply outgrows.”

“This is always going to be a hard job, but by putting certain technology in place, we can work smarter — not harder,” Lowy said. 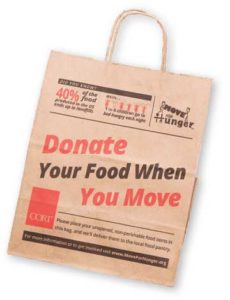 “It used to be that they had to come back, write up an estimate, see what dates were available and get back to the customer,” he said. “Now it’s all in real time because that is exactly what customers are used to in most industries.”

Lowy said that, as long as his family’s business keeps up with technology, that is where it will continue to succeed and exceed expectations.

“But for us, it really all comes down to customer service,” he added. “Moving is one of the most stressful things someone can go through, so to be there from the very beginning with the friendliest, knowledgeable and professional service and experience possible is still so important.”

Max Lowy said he realizes his industry does not have the best reputation.

“Anytime you read or hear any story about a moving company, it’s usually negative,” he said. “Someone was ripped off, overcharged or even had their stuff held hostage on a truck.

“That’s because there are a lot of rogue movers out there who are not licensed, part of a state association or part of a major van line.”

In short, they are not very reputable. But, due to pay-to-play review websites such as Yelp, Lowy said these companies can easily hurt not only their customers but also the industry as a whole.

“Lowy’s (Moving Service) can have 1,000 organic positive reviews on Yelp, but if 20 movers from Brooklyn pay to play, they’re still considered within our market,” he said. “That means tons of New York City-based movers can market to and confuse our customers because the rates for city and suburban moving are very different.”

Flat rates, for example, are highly atypical, Lowy said. That’s why he said it’s so important, especially for residential customers, to get a few different quotes beforehand.

“I’d love for them to take my quote and choose us every time but it’s also about educating our clients to be able to more clearly understand what is out there and be able to use their best judgment before coming back to us with questions,” he said.

Move for Hunger vets each partner it works with as well.

“Move for Hunger only works with socially responsible and accredited moving companies,” Lowy said. “There are tons of movers that reach out who we have to turn away, because reputation is everything and we don’t want to tarnish doing something really good with brands that maybe are not doing the right thing.”

In addition to facing industrywide challenges such as hiring, the relocation industry also can be very slow when it comes to adopting new initiatives and technology, Max Lowy said.

“For example, Lowy’s Moving Service offers price estimates over FaceTime, Skype or Google Hangout to avoid needing to visit someone’s home prior to a move,” he said. “But we are in a regulated industry, so getting the rest of the industry and the state on board is difficult.

“Even though this is what customers in many other industries now expect, it is definitely something our state is behind on.”

“And we don’t just need drivers — we need movers, too,” he said.

But the family-owned and -run business does attract families in business together, too, Lowy added.

“Many of our employees also are related — brother teams, cousin teams, father-son teams, you name it,” he said. “By focusing on our crews and giving them the opportunity to enjoy what they do and how they do it, they have become our biggest recruits.”