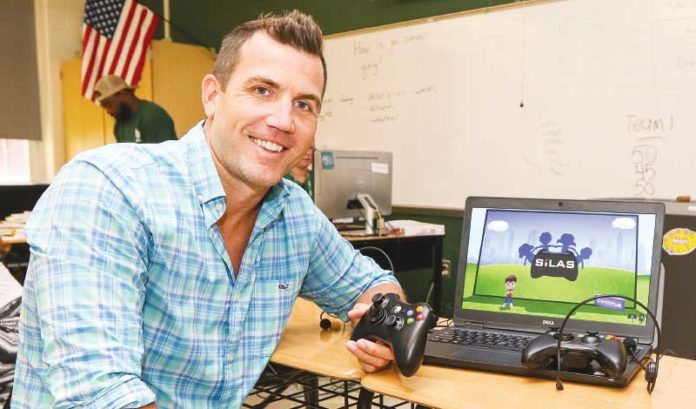 “But, now that social and emotional learning has become such a big topic, our biggest sales to date actually include general education, too,” Dudick, SiLAS’ founder and CEO, said.

“No matter who you are, even if you are the brightest student in the class, if you come to school with baggage and a limited understanding of how to deal with problems or work with someone properly, that will eventually hurt you in the long run,” Dudick said.

SiLAS, he added, is meant to be a fun and engaging way to change that for 21st century learners.

Dudick said he believes kids learn best by doing — and he does, too, having begun his career working in television production for companies such as Nickelodeon and Animation Collective.

“I worked with great people, and the whole process was very cool, but, in my opinion, some of the creators on these shows were just too crazy,” he said. “I thought kids might actually be able to write better — but they just didn’t yet understand how to use the technology.”

“For example, in our ‘Create-a-Cartoon’ class, the kids would work together to create their own characters, write a story and record their voices, and we’d work with them to create a theme song and professionally animate their work,” he said. “Then we realized a lot of kids with special educational needs were coming to that program and doing really well, so we created a version of the class geared toward the learning of social skills, where, instead of having kids create cartoons about anything, we provided them with topics, such as how to resolve conflict or make introductions.”

Dudick even won an Emmy in 2012 for producing “Socially Conscious Cartoons,” a series of cartoons with socially impactful messages created by kids for kids at Small Factory Productions.

But the work required was intense.

“A lot of production work happened after classes ended, and I thought, ‘There must be a better way to do this and still get the same results,’ ” Dudick said.

That is when Dudick said his first investor and co-founder, Michel Marks, founder and president of Friendship Train Foundation in Neptune, hired Small Factory Productions to work with one of his school workshops.

“We met a bunch and he said, ‘Pick something you want me to invest in and I will,’” Dudick said. “And, I thought, social skills instruction for special education students is so far behind the rest of education. There are just too many boring paper-based materials and nothing technology-based to get kids excited.

“I thought we could create a cool software version of what we were doing at Small Factory Productions and market it as a new way to teach social skills.”

“I immediately went out and built a beta to be researched at Princeton University and Kean University,” Dudick said. “When both studies did well, I used them to submit a proposal to the National Science Foundation, which granted us $225,000 in January 2017 to develop the product.”

That’s when Dudick closed up shop at Small Factory Productions and went all-in on SiLAS, creating strategic partnerships and fundraising for the software company ever since.

His gamble worked, as SiLAS is now used in schools across the country to promote social and emotional learning.

“We market directly to schools via conferences and speaking with education directors,” Dudick said.

To use the software, teachers must first give instruction using the K-12 curriculum provided by SiLAS to help students develop written scripts.

“The kids then select avatars and virtual backgrounds before recording their voices and creating animations by controlling their avatars via video game controllers,” Dudick said. “They think they are just playing a game and making a movie, but, actually, they are learning critical social skills.”

The software costs $300 per student or $5,500 for an unlimited number of students. Both packages come with video game controllers, microphones and training.

“Right now, every school is approaching social and emotional learning differently, because it’s not like budgeting for an additional math class,” Dudick said. “Most of the time, special education students already have some sort of social skills programs built into their curriculum, but general education doesn’t.”

The education sector is also in itself difficult to sell to, he added.

“It’s not like selling to private business, where they are immediately able to purchase,” Dudick said. “You have to get written into budgets, checks are typically cut just once per year, and the large bureaucracy slows down the process.

“But once you get in and they like your product, they support you. We got a lot of new districts this year just from referrals with the contracts we got last year.”

Dudick said he has relied on support from advisers, including Gene Wolf, chair of Monmouth SCORE, to push through.

“We have to do the work, but there are brilliant people out there willing to donate their time and knowledge to help you develop a road map,” he said. “And just because someone isn’t in education doesn’t mean they don’t have helpful business advice, since a lot of startup business advice is universal.”

Dudick said he also has found success at pitch contests at universities including Princeton and Rutgers University, and business accelerators such as TechLaunch and MassChallenge.

“Pitch competitions are simply a part of what you have to do in order to get yourself out there, especially in education,” he said. “Many investors don’t want to bother with it because of the bureaucracy, meaning education has become sort of a black sheep when it comes to startup industries.”

But, given its recent partnership with Microsoft to use its proprietary Immersive Reader software, designed to support students with learning disabilities, Dudick said he sees the possibility for SiLAS to triple its sales this year.

“We’re looking to be a $1 million business by 2021 and that timeline will only speed up with like-minded, socially conscious investors,” he said. “We have a very profitable business with reoccurring revenue and high margins, but investors need to be willing to stick it out.”

Dudick said he tells fellow entrepreneurs not to get discouraged in the face of adversity.

“When I first started, I had never sold software before; I had never done a large-scale push to schools; but, after going to enough conferences, I finally met all the right people I needed to surround myself with and I’m still meeting wonderful people,” he said. “It’s very exciting.”

“So, when we received our grant from the National Science Foundation for SiLAS, I immediately got an office over at Fort Monmouth and hired a full-time staff of nine,” he said.

However, after building the product and launching the company, Dudick said he realized he had put the cart before the horse, given that the business did not yet have sales.

“It was difficult to make the decision to let everyone go and go on the road myself in 2018, but I needed to sell as much product as I could,” Dudick said.

By the end of that year, Dudick said he had sold SiLAS to 15 school districts.

And he hasn’t looked back.

“I now have one recent full-time hire, as well as part-time consultants, but I have since been very strategic,” Dudick said. “Education is slow and having people sitting around waiting for stuff to happen is not smart.”

Dudick said he also learned to love working from home.

“Once I grew comfortable with it, it was amazing to be able to save the money,” he said. “When it comes down to it, everyone ends up doing their own thing anyway.

“My software developers are all independent contractors. My consultants are all over the place, including in California. My full-time hire, who will focus on customer success and curriculum, lives in Indiana. And I’m either at a conference, in a school or connecting from my computer, so it doesn’t matter where I’m at. Right now, it works.”

As the company grows, Dudick says he will once again need office space.

“But I am going to stick with the model that we don’t need to be on-site all the time,” he said. “I think people can be just as productive doing work this way off-site.”