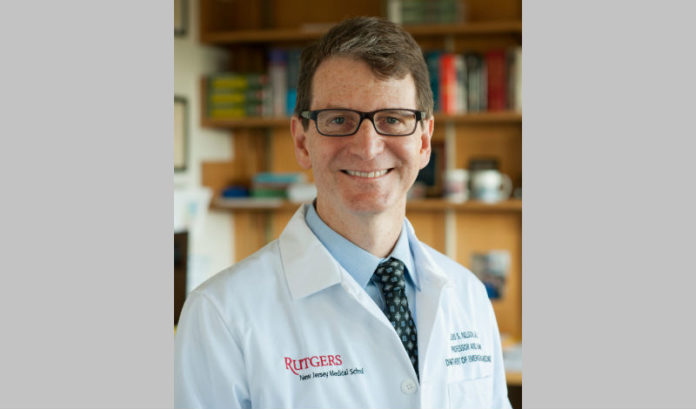 Shortly after effectively explaining that many groups deserve blame for the opioid-addiction problem in this country — everyone from the pharmaceutical companies that produce the drugs, the federal agencies that regulate it, the doctors who prescribe it and the insurance companies that cover it — Dr. Lewis Nelson explained why he feels it’s acceptable for pharma companies to be found liable.

Nelson is a professor and chair of the Department of Emergency Medicine at Rutgers New Jersey Medical School in Newark — a position he’s held for three years, following more than two decades of work in similar roles at New York University.

As an emergency physician, medical toxicologist and an addiction medicine physician, he brings a unique perspective to the landmark judicial decision Monday, when an Oklahoma court found New Brunswick-based Johnson & Johnson guilty of aiding the opioid crisis.

Nelson agrees with the judgement — and was one of few folks I reached out to since the verdict willing and eager to talk about it.

“I don’t think anybody’s saying (pharma is) completely liable, but I think, at some level, they have to be held liable,” he said. “Remember, they were the ones that were out there beating the bushes for expanded use of opioids to treat chronic pain. They were paying for ads at primary care doctors’ offices. They were supporting professional organizations and advocacy groups.

“If you want to take a very cynical approach, this was profit-driven and that’s what people have tried to show, at least with Purdue (Pharma).”

Purdue, perhaps the biggest pharma name around the issue, reportedly is ready to pay up to $15 billion — and go out of business — just to escape more lawsuits.

Johnson & Johnson has vowed to appeal the $572 million judgment. And, while it may eventually get that number knocked down, it sets a bad precedent for an industry already facing 2,000 more suits.

“They knew,” he said, speaking of all of the pharma companies. “It’s like the tobacco industry. They knew this was a problem. They knew that the expanded use of opioids was going to lead to some long-term social and personal consequences, but, rather than stop it, they encouraged it, and they do bear some responsibility.”

Nelson is clear about a few other things: He’s not anti-pharma. And he’s not on a crusade.

“I hope I’m not being viewed as being particularly outspoken,” he said. “I’m trying to be rational. I’m not a zealot on the issue. I think there’s a lot of blame to go around for this problem. Pharma bears part of it, but there’s a lot of other people who deserve some of the blame for the problem as well.

“Everybody from the regulators and the insurance companies and physicians and health care providers. Even patients and patient advocacy groups are a big problem.

“Pharmaceutical companies certainly have been in lockstep with all of these other groups and, at some level, they’ve been supporting some of the groups to meet their own personal goals. So, it is a lot of interdigitation of these different groups. I’m not here to bash pharma.”

The DEA and FDA are not free from blame either, Nelson said.

“The DEA continued to expand the allowed amount of opium into the country to develop the prescription opioids,” he said. “And that went year after year. They were sort of blind to the idea that there was a problem. They just said, ‘Oh, yeah, there’s more pain. Let’s just bring in more opioids.’ They could have said, ‘You don’t need this much opioids for pain.’

“The FDA continued to approve more opioid formulations with limited data to support their safety and benefit.”

This was more problematic, Nelson said.

“They’re regulated by a congressional act,” he said. “The FDA can’t just go about making whatever decisions it wants. It has to be responsive to the laws that they work under.

“So, in their interpretation, they were sort of committed to approving drugs if they met a certain regulatory threshold and they weren’t really capable of looking at the public health complications, at least until very recently.”

Solving the problem is not.

As an emergency room doctor, Nelson prescribes opioids himself. And, while he says he is extra cautious and gives small doses, he knows he can be a contributor to the problem himself.

The potential bankruptcy of Purdue won’t solve the problem, either, Nelson said.

“If Purdue goes away, there’s plenty of other companies that are going to continue to manufacture these things,” he said.

“This is sort of like a train that’s moving in a circle direction,” he said. “Where you are jumping on or off the train depends on your perspective.

“Is the opioid manufacturer the locomotive or the caboose?

“I think it’s a chicken-and-egg argument, and I don’t think we’re ever going to really disentangle those things. But, clearly at some level, pharma had some responsibility to do something because they were the ones that profited by far the most from all of these connections.”