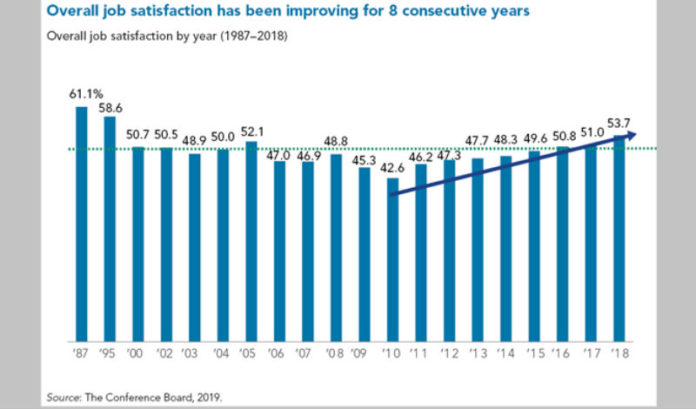 Americans are feeling more confident than ever about their jobs, so says a new survey conducted by the think tank The Conference Board.

The survey of approximately 2,000 U.S. workers showed more than half (54%) are satisfied with their employment. Satisfaction is up roughly 3% when compared to last year, marking the biggest increase in the survey’s 32-year history, it said.

“In today’s strong jobs market, people are quitting their current positions at the fastest pace in over two decades,” Gad Levanon, an author of the report and The Conference Board’s chief economist for North America, said. “It’s one of the many signs that illustrate improved opportunities for workers. They now have more leverage when it comes to increasing their paychecks and finding jobs that better align with their interests and skills.”

The survey found millennials reported a boost in confidence about their pay, which rose 9.8%. However, workers in their peak earning years (age 33-54) remained the most satisfied.

The Conference Board then analyzed what components most influenced satisfaction and the potential for future growth topped the list, followed by communication channels, recognition/acknowledgement, interest in work and performance review process.

“Our research reveals that workers place the biggest premium on a job’s potential for future growth, but at the moment 60% of U.S. workers feel dissatisfied with this component,” Robin Erickson, an author of the report and a principal researcher at The Conference Board, said. “To help change course – and ultimately, retain their employees so they gain an edge in this tight labor market – organizations should make a greater commitment to total talent mobility, a holistic approach to both internal and global mobility.”

When comparing men and women, the top drivers remain the same (potential for growth, communication, recognition), but there are differences.

Women place more value on people at work, workload, communication channels and work/life balance for greater job satisfaction, which suggests women are happier with a job that allows them the flexibility to be a primary caretaker.