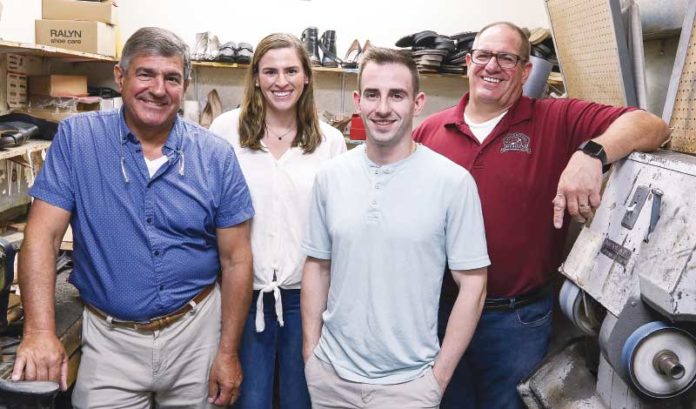 Marissa Rago, 25, said she thought she would teach Spanish.

Instead, she speaks it every day while working at her family’s fourth-generation leather and shoe repair service.

“Many of our craftworkers and clients speak only Spanish, so I have become the official translator,” Rago said.

Rago Brothers Shoe and Leather Repair in Morristown — the recommended repair service of many luxury shoe, coat and handbag designers — has combined world craftmanship with state-of-the-art equipment for nearly 108 years.

“But my dad and uncle really made this business what it is today so that me and my brother could one day take over,” Rago, account manager, said.

Rago said she and her brother are eager to continue their family’s historic work.

In 1911, Thomas “Nicholas” Rago and his brother, Louis Rago, emigrated to Morristown from southern Italy and opened the original shop — one of nearly two dozen shoe repair shops in the area.

However, as other shops moved or closed, Rago Brothers remained. Thomas “Tommy” Rago Sr. therefore joined his father in the 1940s, and his sons, Tom and Tony Rago, joined the business in the late ’70s and mid-’80s.

“My father, Tony, went around to all the stores in and around the Short Hills mall and introduced himself,” Marissa Rago said. “He loved talking to people and, so, when he started doing work for one store, a manager or an employee would say to another, ‘Hey, send your stuff to Rago Brothers! They can do it.’”

Rago’s uncle, Tom, also was busy networking with dry cleaners around the state, she said.

“Word spread, and that is how we got multiple accounts with nationwide and even global companies,” Rago said.

Still, the brothers were unsuccessful in hiring the family business’s fourth generation — at first.

“In high school and college, I loved Spanish, studying different cultures and traveling to places like Spain and Peru,” Rago said.

After becoming fluent in Spanish, Rago pursued a degree in Hispanic studies with the intent to become a teacher.

“But student teaching was not like what I had thought,” she said.

Rago instead worked in merchandising in Boston, but said she still felt restless.

That’s when her brother told her to come work for the family business, too, she said — a decision he had made one year earlier after learning what it was like to work in New York.

“When I was little, I always saw my dad putting in countless hours at the shop,” Rago said. “But what my brother and I learned most from him is you have to put in the hard work to see the results.”

Now in her third year at Rago Brothers, Rago said she has successfully paired her passion for the Spanish language and her work with the family business, as many of the company’s 45 employees are Hispanic.

“We have people who have worked here since my grandfather was at the helm,” she said. “It is very labor-intensive work and you have to know what you are doing.

“Some people naturally have a knack for leather work — but other skills you can teach.”

That is why Rago said they have not had much trouble hiring in an industry notorious for craftworker shortages.

“If someone’s friend or spouse is looking for a job, we say, ‘OK, bring them in and we’ll test them out, see how they make a few things,’ ” she said. “Then we have someone who has been here for years show them the ways to get started and improve their techniques.

“Most of the time, our employees’ recommendations turn out to be amazing.”

Rago said her family’s business also is fine with and understanding of the recent minimum wage increase.

“We pay our employees fairly based on how much work they put in and the level of skill that is required,” she said. “We appreciate them, and that shows through their wages.”

There always is a need to keep hiring, Rago said, with lines often building out the front door and down the stairs in the back on weekends.

“On a Saturday, we can see hundreds of customers,” she said.

Rago said she spends her time not only managing the business and assessing items at the counter, but also the company’s nationwide accounts with high-end stores and clients, including designers such as Salvatore Ferragamo, Jimmy Choo, Chloé and Michael Kors.

“For example, if a customer brings a handbag into a store, the store will send it to us, I make sure the proper person makes repairs, I check it and I send it back,” she said.

Repairs can drastically vary in price, ranging from $20 for simple stitching to $80 or more to rebuild the base of a handle, she added.

“That’s because each bag or shoe breaks in a unique way, because a unique person wore it,” Rago said.

The specialty repair business continues to grow as her father and uncle embrace more flexibility, but Rago said she and her brother continue to take on new accounts while growing the business’s social media presence and mail-in repair service online, where people from around the world can send them items to fix.

“We’re very fortunate that the word keeps spreading,” she said.

“We are talking about how we might expand into the parking lot out back,” she said. “We want to be able to maintain our quality and, for that reason, we’d like to stay in our current spot — but you never know.”

It’s a future decision that may well rest entirely with Marissa and Anthony Rago, as they continue to take on more responsibility at the family business, she added.

“We are learning as much as we can while my dad and uncle are here, because there are just so many things to manage and repair,” Marissa Rago said.

But while her father, uncle and brother already know how to repair shoes, Rago said that doesn’t faze her.

“I need and am willing to learn that, too.”

“One person even brought in a leather rhino, a decoration one might keep in their living room, and we had to fix the tail,” she said. “People bring in all sorts of things and we simply have to figure out ways to fix them if we don’t already know.”

That can be difficult these days.

“Everyone’s coming out with funky new materials,” Rago said. “The trends are metallic and patent leather, but you can’t always clean those when they get dirty.”

Rago Brothers is happy to experiment with different ways to refinish an item in disrepair, however.

“If we get one client who says they cannot use their patent leather bag and are willing to let us try whatever we want, we will try to come up with an innovative technique to refinish it,” Rago said. “If they end up loving it, well, now, we are the only ones who are able to do it.”

Marissa Rago said it is difficult not to compare one’s work environment with their friends’ — but it is important to remember there are pros and cons to every job.

“When your friends have glamorous jobs with great perks, you don’t always think about joining the family business,” she said. “But I got a taste of the corporate world and realized that wasn’t what I wanted in the long run.”

Her work in Boston, for example, had set hours from 9 to 5, in which she would eat breakfast and lunch with team members and leave at the end of the day, she said.

“At Rago Brothers, I get here early and there already are people walking in, the phone is ringing, I’m beginning to translate — there is a lot going on from the get-go,” Rago said. “There is no dilly-dallying.”

And, if there is something still to be done or a crisis to solve at the end of the day, Rago said she often works past her typical workday.

That does mean that, after working continuous 12-hour days, Rago and her brother, Anthony Rago, had to talk with their father Tony Rago about adjusting their work-life balance — to 10-hour days.

“Working with my dad and my uncle, sometimes I forget they are my bosses and it is easy to treat them like family,” Rago said. “But, in a family business, if you happen to do that, they’ll forgive you. In Corporate America, maybe not so much.”