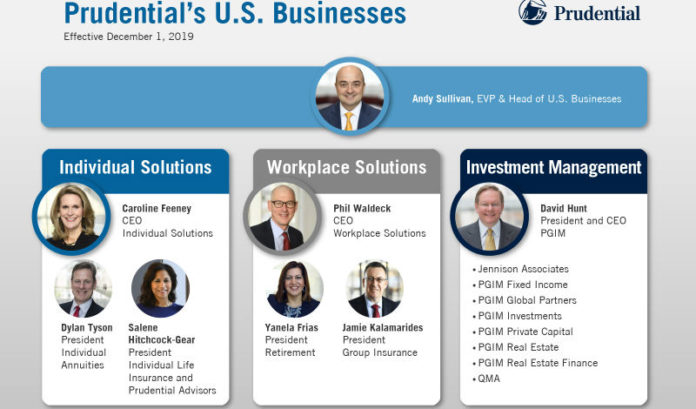 Pelletier, 66, is retiring after serving a 27-year-long career with the company, it said. During that he led Group Insurance and Prudential Annuities and founded Prudential’s international asset management business, now PGIM Global Partners. Pelletier will remain in an advisory role until April 1, 2020.

“Today’s appointments accelerate the momentum that the existing U.S. leadership team has created over the past several years. Andy and his executive team will continue to bring a broader set of financial wellness solutions to more people in new ways,” Charles Lowrey, chairman and CEO, said. “Our conviction in this strategy, and the significant opportunity it represents for expanding our market reach, has never been stronger.”

Continuing in their current roles include:

Kent Sluyter, the current president of Prudential Annuities, is also retiring. He spent 38 years with Prudential, during which he held a variety of leadership roles, including CEO and president of Individual Life Insurance and Prudential Advisors.

States are battling to attract foreign companies. Here’s how one group...