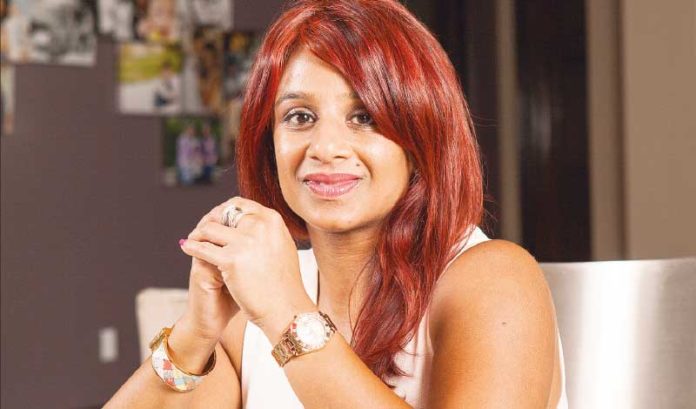 In 2015, Sejal Lakhani became the majority owner of the information technology and cybersecurity support firm she established with her husband in 2008.

It was not until his sudden passing in late February, however, that Lakhani alone would be tasked with restructuring and revitalizing the business while navigating her family’s loss.

“But I think it’s very important for women to understand that they can do this,” Lakhani, CEO of TechWerxe in Livingston, added.

Now the sole owner of the business, Lakhani is leading the company through the transition while continuing on the strategic growth plan she and her husband, Tejas Bhatt, always had envisioned.

“I’ve found myself alone in a very male-dominated field, but we are still going to kick ass,” she said.

Lakhani has held her own thus far — without even having a background in IT.

After graduating with dual degrees in finance, marketing and legal studies from the State University of New York at Buffalo, Lakhani spent nearly 12 years working in trade and project management roles for global financial firms, including Merrill Lynch, Morgan Stanley and Deutsche Bank, while living in cities such as London, Hong Kong, Tokyo and Singapore.

“I was working for Deutsche Bank in 2008 when my husband, Tejas, said, ‘Hey, why don’t we start a company?’” she said. “We were in the heart of the recession, I had a stable job and I was pregnant with our first child, so I said, ‘You know, let’s do it.’”

Bhatt, whose background was in information technology, established TechWerxe after recognizing a gap in the quality of IT services available to small- and medium-sized businesses, with many needing the same level of cybersecurity and cloud-based technology services as larger businesses, but not being able to afford it.

“Tejas started the company in the same way others did — as a help desk,” Lakhani said.

When the business became successful, Lakhani quit her job and began consulting full-time for the company in 2012.

By 2014, she had taken over operations, sales and marketing, she said.

“I also realized we could completely restructure the company to be different from anything else out there,” Lakhani said.

All they had to do was better educate their clients.

Most IT companies are reactive due to a common mindset, Lakhani said.

“Smaller businesses often think that paying for IT help on an hourly basis is more manageable,” she said. “They’ll say, ‘Let’s not waste money right now on smaller issues; let’s wait until it all piles up and then call for a one-hour time slot.’

“But, if you pay technicians hourly, they may take longer to fix problems or may not fix it right so they can then go back and bill you more.”

Lakhani said her and Bhatt’s solution was to instead charge a flat fee.

“So, the more times you have a problem, we’re losing money — not you,” Lakhani said.

“Instead of being firefighters who wait around for people to call, we changed our procedures to be able to solve normal problems before they would even happen,” Lakhani said. “Instead of skimping on this or not doing something correctly the first time, we work with the goal of our clients never needing to call us.”

This saves clients money, time and frustration while increasing company efficiency and productivity, she added.

“Every single hour that a business is down is actually a big deal when you think about an employee’s salary and benefits, the lease and electricity, the number of clients you have and your business’s reputation,” Lakhani said. “It costs much more once the damage is done, having to replace and redo everything, whereas, if you just had someone to prevent fires from happening in the first place, it would be more cost-effective.”

The challenge used to be — and sometimes still is — making sure companies understand why IT is a necessity and not a luxury.

“There are still so many companies that think it will never happen to them, but nearly 60% of cyberbreaches happen to small- and medium-sized businesses, with over half of those being unable to recover and closing within six months,” Lakhani said.

The reoccurring and increasing severity of cyberbreaches, however, has helped more businesses to understand, she added.

“They now want to use a company that actually knows what they are doing, that is consistently maintaining, that has all the compliances and regulations intact to make sure they are secure,” Lakhani said.

New Jersey has been a hot spot for the type of clients TechWerxe works with, she added, with clients ranging from financial firms to health care facilities, from security companies to food and flavor manufacturers, and from engineering firms to manufacturers who provide materials to the Department of Defense.

“Our clients often require the protection of personal and confidential information, as well as intellectual property, and we are really well known for that,” Lakhani said. “We are like an insurance policy. People think you’re never going to need it and are simply paying all this money for nothing, but, then, boom — something happens, and you’re thankful.”

It is the unfortunate truth, however, that not all tragedies can be prevented.

Lakhani had no idea what lay ahead for her and her family when she took over 70% of the company in 2015 and became CEO, allowing Bhatt to focus solely on the tech.

“For example, we used to employ 12 people in Pennsylvania, 15 in Atlanta that we shared with three other IT companies and four in New Jersey,” Lakhani said.

The idea back in January was to consolidate and build out the team in New Jersey while maintaining the team in Atlanta, she added.

But then Bhatt died of a heart attack in late February at the age of 39.

Then, Bhatt’s brother decided to leave TechWerxe for another job opportunity in April, leaving Lakhani to manage and hire for an IT company without knowing the ins and outs of IT.

“Having built our own organic cloud, having to have someone else come in to look at and understand the infrastructure to then figure out what Tejas’ vision was and continue on, that was really difficult,” Lakhani said. “But you simply need to look at your priorities and do whatever it is that you can.”

Some decisions have been more difficult than others, she said.

“At some point, you have to figure out what the hell is worth it and what’s not,” Lakhani said. “For example, with our backup system, the vendor wouldn’t move everything to my name because it was too much paperwork — so, we fired them and we now have a new vendor that we are working with.

“We also were hosting other IT companies on our cloud and I made the decision to shut that aspect of the business down in April, even though it brought in a good amount of revenue. I simply had to figure out where I was going to focus.”

Relying on her team, however, has not only been easier, but crucial, Lakhani said.

“While I was in the midst of my own head about what to do and dealing with our family’s loss, my colleagues decided to pick up and say, ‘OK, she’s going to need another chief information officer — who can we identify, speak with and negotiate for before she even figures out she needs somebody?’”

Even her clients reacted positively, given their history with the extremely transparent and relationship-oriented company.

“Not a single one has left us, even though we were out of commission for nearly a month,” Lakhani said. “I’ve never taken on a client I haven’t met or couldn’t hang out with, and I meet with every single one of our clients each quarter, if not more. So, when all of this happened, there was no sense of detachment — it was, ‘We know you, we know your kids, and we’re here for you.’

“People are going to stay with us because they trust us, and that aspect has not changed.”

Prior to Bhatt’s passing, TechWerxe was on track to become a $10 million company with at least one acquisition by 2025.

Lakhani said she still intends to reach that goal — on her own timeline.

“A five-year growth plan is too far out for me right now,” she said. “I just have to keep getting little things done first while keeping a to-do list.”

The plan is still to keep the company’s security team in Atlanta and hire at least a dozen more employees in New Jersey.

Then, Lakhani said, she would like to reinstate the cloud-hosting business.

“I will spin that back up — but it’s not going to be today,” she said.

The one thing she doesn’t believe in, she added, is balance.

“Every day, there is a new priority,” Lakhani said. “Today, it might be family, tomorrow, it might be work, and, maybe the next, it will be me.”

But even with less and less “me” time these days, Lakhani said she still finds time to be on the board for Entrepreneurs Organization New Jersey, Connect 4 Business Exchange and the Metro YMCA of the Oranges.

She also said it helps to follow one piece of advice:

“No decision you make today is going to be wrong, because every decision can be changed the next day,” Lakhani said. “Our biggest worry often is, ‘Oh, my God, is this the right thing for our kids, the company, the house, our parents,’ etc. But we are the ones making the decisions, and those decisions usually can be reversed.

“The key is just to keep moving forward.”

Sejal Lakhani said losing her husband and the father of her two young children has been really difficult.

“He passed really young,” she said. “We weren’t ready.”

Yet, while no one expects something like this to happen, Lakhani said she has learned that sharing information such as Wi-Fi passwords and phone passcodes may not be the worst idea.

“Make sure if you are a partner in business or in life, you are both on any accounts and have shared with each other the little things you think you both already know,” she said. “For example, just for me to move everything to my name, even though I own 70% of the business and I am his wife, I’m still battling with some vendors.”

Politics
ROI-NJ Staff -
January 22, 2021
Pete Buttigieg got high marks from U.S. senators Thursday during his confirmation hearing to be the next secretary of transportation. Even a Republican, Sen....

Wipro CEO Neemuchwala to step down