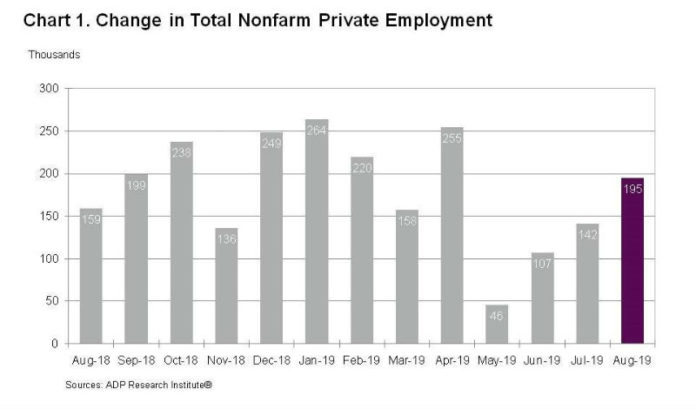 The nation’s private sector employment grew by nearly 200,000 jobs in August, according to the latest report by Roseland-based ADP.

“In August we saw a rebound in private-sector employment,” Ahu Yildirmaz, vice president and co-head of the ADP Research Institute, said. “This is the first time in the last 12 months that we have seen balanced  job growth across small, medium and large-sized companies.”

Breaking down the service-providing sector, education and health services was the top gainer, adding 58,000 new positions. Next up was leisure and hospitality, which saw a growth of 42,000; trade/transportation/utilities added 39,000; professional and business services added 35,000; other services added 11,000; and financial actives added 5,000. The only subset to lose jobs was information, which lost 6,000 roles.

In the goods-producing sector, manufacturing added the most with 8,000 new jobs. Natural resources and mining lost 2,000 while construction added 6,000.

“Businesses are holding firm on their payrolls despite the slowing economy. Hiring has moderated, but layoffs remain low. As long as this continues, recession will remain at bay,” Mark Zandi, chief economist of Moody’s Analytics, said.