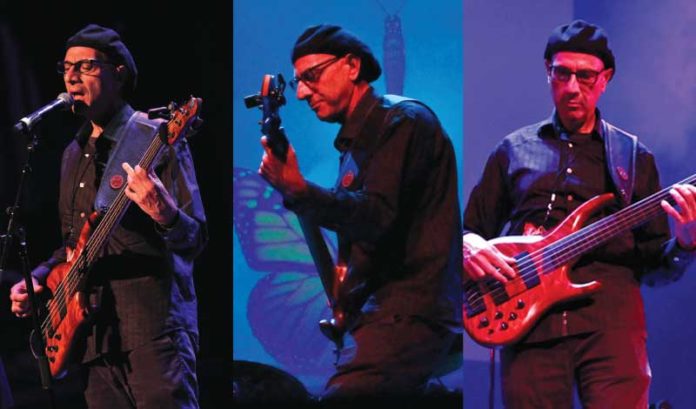 If ever you need an entertainment lawyer in the music business, Ron Bienstock is not only one of the most influential — he really knows his stuff.

“I’ve done this a really long time and have had longstanding relationships with my clients, some of whom I’ve known for 35 years,” he said.

As a performing and recording bass player for more than 40 years, Bienstock also is a voting member of the National Association of Recording Arts and Sciences (i.e., the Grammys); a co-founder of the band The Suits, which appeared on “Late Night with Conan O’Brien”; a performer and recording artist with Blue East and Ryche Chlanda and Flying Dreams on the TransGlobal record label; and has appeared on bills with the Doobie Brothers, Spin Doctors, Blues Traveler, Billy Joel and more.

“I started playing when I was 16,” Bienstock said.

He “got lucky,” he said, after playing in various bands and receiving mentorship from older players who took him under his wing and gave him the opportunity to continue playing throughout college with highly successful bands.

“I did a lot of touring and recording, and then I went off to law school,” Bienstock said.

He had wanted to become an entertainment attorney since the age of 17, he added.

“I worked with a few, and I’ll be blunt with you — nobody could be as bad as those guys were,” Bienstock said. “These mean-spirited guys would say, ‘Hey, now, you listen to me, sonny,’ and I’d say, ‘Wait, you don’t even have an idea of what we actually do for a living. Not everybody in this industry is a drug-addled wastoid who needs to be dragged out of bed, so stop saying that.’”

Bienstock said he didn’t smoke or drink — he simply was interested in the music and becoming as good a player as he could be.

“I showed up on time, I knew my parts and I was just floored with how difficult and prejudiced some of these attorneys were,” he said. “And I just felt like, well, someone had to do this right.”

After attending law school, Bienstock said he lived in Los Angeles, worked for a few entertainment firms and continued to complete session work and perform with different bands.

Then, on a whim, he answered a job advertisement in the New York Times for editor-in-chief of International Musician and Recording World Magazine.

“I had been editor-in-chief of my college and law school papers and I knew the magazine,” Bienstock said. “It was a U.K.-based magazine that had started an edition in the U.S., and it was terrible. So, I went for the interview, brought a marked-up magazine, and said, ‘Guys — we’ve got to improve this.’ And they hired me as editor-in-chief and publisher.”

It was there, Bienstock said, that he got to meet with guitar manufacturers, ultimately landing him the role of general counsel at Hoshino USA, manufacturer of Ibanez guitars and Tama drums.

“I was maybe 30 and I said, ‘Now is the time,’” he said. “I had a lot of contacts and supportive friends and I always had wanted to do my own thing.”

He founded Bienstock & Michael, a full-service entertainment and intellectual property firm, in his apartment.

“Then I signed a bunch of bands to different labels, my clientele and staff expanded, and we very quickly had to move to 57th Street in New York City to continue representing all these artists,” Bienstock said.

When the music industry dispersed outside of Midtown, Bienstock moved the majority of his firm’s staff to Hackensack.

Then, nearly 30 years later, he merged with Scarinci Hollenbeck in 2016.

“You get to a point where you’ve got a firm of nearly a dozen and you’re constantly referring out work that isn’t always done in the way you might appreciate,” Bienstock said. “Coming here gave me a platform on a much broader spectrum, with many more experts I could work with.”

Still, Bienstock said he finds time to record and play at least three gigs a month.

“This is the greatest thing to do in the world,” he said. “In this role, I also get to attend and play at trade shows and test and talk gear all the time with clients. I can talk to a client about a two-channel bass amp that I just used at a gig and make suggestions on how to improve it after all these years. I get to try out new cables, speaker cabinets, strings and more — it just doesn’t get any better.

“The practice comes first, but it’s not a job. I love it.”