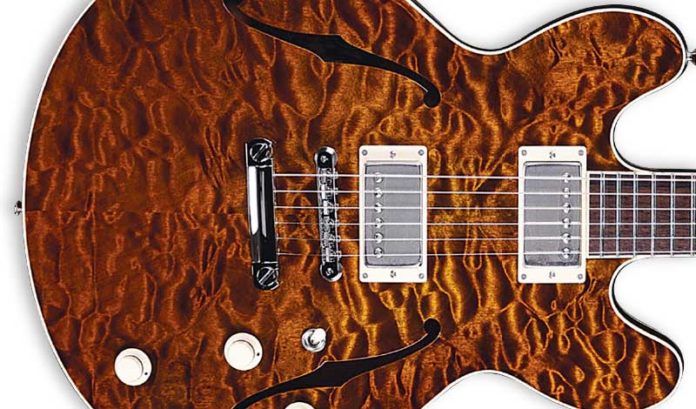 Gibson Guitars is one of the largest and best-known guitar manufacturers in the world.

But Ron Bienstock — one of the most influential lawyers in the music business — is not afraid of a challenge.

Especially since Bienstock, a professional bass player, is an expert on guitars himself.

“I suppose if you hang around long enough, people are just going to call you,” Bienstock, partner and section chief for entertainment and intellectual property at Scarinci Hollenbeck in Lyndhurst, said.

More than a dozen guitar manufacturers have done just that to hire him as lead counsel.

Since 2014, Gibson has been trying to ban all guitar manufacturers from designing guitars similar to its trademarked body styles, including its semi-hollow ES-335.

Bienstock has been working to challenge the legitimacy of the trademark altogether.

“My clients decided they have a vested interest in saying, no, the ES-335 body shape has been made by hundreds of other companies that have helped to build the market for this type of popular, generic body shape as much as Gibson has,” Bienstock said. “They’ve advertised it, put catalogs out, listed it on their website and have had their own musicians playing them.

“And we fully agree.”

If you’re not a guitar player, you might already be lost in the terminology.

A number of frequently manufactured body shapes — or the form of the guitar, with different styles affecting how a guitar plays, feels and sounds — currently exist in the guitar industry.

“In the trademark parlance, these are called product configurations, or ‘the shape of something,’” Bienstock said.

According to Bienstock, many body shapes originated in 1958, but not all were successful.

“For example, the Flying V, as Gibson calls its V-shape guitar, was at first a commercial failure because you couldn’t sit down and play it — but the ES-335, this double-rounded, double-cutaway shape, which was fairly common at the time and had been manufactured before, Gibson sort of coalesced it into one model in 1958,” he said. “And that had a much different commercial reaction — it didn’t have a futuristic look, it didn’t feature sharp corners, it was fairly comfortable for most people, and what it had was this solid piece of wood, a tone block, that went down the center of the guitar to give the player a bit more sustain without as much feedback, to allow them to play louder for jazz, rock or rhythm and blues.

“The ES-335 had a functional purpose to its shape.”

However, Gibson reached a low ebb in the mid-1980s, Bienstock said, as competitive companies such as Ibanez and Paul Reed Smith began manufacturing guitars to meet the demands of diverse players.

“These companies gain a foothold in the marketplace because they are now making instruments that are giving players what they are asking for,” Bienstock said. “Maybe it’s pickup combinations, maybe they’re more lightweight, maybe they’re made with certain woods, maybe they’ve got the same Floyd Rose tremolo system that Eddie Van Halen had — point is, they were appealing to the market.”

Gibson therefore sold in 1985 for $5 million, with the then-owners consolidating the activities of the company in Nashville.

“They also sold the factory in Kalamazoo, Michigan, to the people who had been manufacturing Gibson guitars there and those people went and formed a new company called the Heritage to manufacture exactly what they were making before,” Bienstock said.

The new owners of Gibson sued but there had been no formal agreement as to what the Heritage could or could not sell.

“So, after that, Gibson decided they better start filing trademarks,” Bienstock said.

Gibson registered a number of guitar shapes with the U.S. Patent and Trademark Office’s principal register during the 1990s.

“And at that time, the industry did not unite to say, ‘No, you can’t own these designs because other companies also have been making them now for nearly 50 years,’” Bienstock said.

The ES-335, however, was only able to secure a spot on the supplemental register, a lower tier of trademark with limited protections.

“Everybody manufactured it,” Bienstock said. “All you’ve got to say to anybody is, ‘Hey, you’ve got a 335?’ And people say, ‘Yeah, I’ve got a name-the-brand.’ It’s now a generic reference to a semi-hollow-bodied guitar.”

“Gibson pursued a couple companies, but it wasn’t an aggressive, across-the-board approach because there were just too many that had been making these guitars as long as or longer than the new Gibson company had been,” he said.

Then, in 2003, Bienstock represented 17 companies against Fender Musical Instruments Corp., another global guitar company, to stop the brand from owning its guitar shapes.

What resulted was a six-year fight in trademark court that ended in 2009 with a favorable ruling, declaring Fender could not trademark certain recognizable guitar body styles, including its Stratocaster, Telecaster and Precision Bass body shapes, as they were generic and of common use.

“If you are going to trademark a guitar shape, what you have to be saying is everyone looks at that design and recognizes your company as the only source,” Bienstock said. “You also need to say that no one else manufactures or sells it.

“No one would agree with that, because everybody does and has been manufacturing it, too.”

Despite the precedent having been set with Fender, Gibson today is following suit, having claimed trademark infringement on specific models, including its Flying V, Explorer, ES and SG body shape designs.

“The company has issued more than a dozen cease-and-desist letters to our clients,” Bienstock said.

In 2014, Bienstock represented John Hornby Skewes, the brand behind Vintage, Fret-King and more, when Gibson accused the company of counterfeit and filed a federal lawsuit in California.

“We got the entire case dismissed with prejudice,” Bienstock said. “But, because Gibson wanted to try to enforce its ES-335 trademark, they needed to take it from the supplemental register to the principal register by applying all over again. That’s what they did, and we opposed it.

“That case has now been pending for five years.”

“I think there is an attempt to get the best public relations out of this new company that they can, but the ultimate road Gibson is on is the same as the old company, which is to eliminate competition and to attempt to try to get people not to make instruments in these incredibly popular and generic shapes,” Bienstock said.

A coalition of guitar brands, including ESP, Peavey and Collings, have continued to band together with Bienstock to challenge Gibson’s upgrade of its ES-335 trademark.

But the company continues to fight back.

In June, for example, Gibson served Florida-based Armadillo Distribution Enterprises, parent company of Dean Guitars and Luna Guitars, with a trademark lawsuit in Texas, claiming trademark infringement, counterfeiting, dilution and unfair competition arising from Armadillo’s “unauthorized” use of Gibson designs for guitar body shapes and headstocks (the mechanism that holds the strings at the head of the instrument).

Armadillo’s countersuit has called for the cancellation of Gibson’s U.S. trademarks for the Flying V, Explorer and ES-335 body shapes.

“You’re seeing the impact of trying to put a plug into a large crevice, of Gibson trying to say, ‘You all have to stop doing this’ — but these guitar designs have been in production for decades,” Bienstock said. “Dean has made Explorer and V-shape guitars since 1977. Calling a Dean guitar counterfeit is ludicrous. Trust me, no one is buying a Dean guitar, looking at the headstock and thinking, ‘I didn’t know I was buying a Dean; I thought I was buying a Gibson.’”

While Bienstock has consulted with Armadillo, the company is represented by another law firm in Texas, as Gibson has requested a jury trial to resolve the case.

However, Bienstock continues to represent all the companies — including Armadillo — as part of the ES-335 Trademark Trial and Appeal Board opposition.

“Our clients want this adjudicated and done with,” he said.

If Gibson were to win, Bienstock said it would shut down a large portion of the industry manufacturing similar styles and successfully monopolize the market share.

But he doesn’t think it likely, especially given that, in July, Gibson’s trademark of its Flying V guitar body shape was canceled with the European Union Intellectual Property Office after Hans-Peter Wilfer, owner of Warwick, a German guitar manufacturer, declared it partially invalid in 2014.

While other designs are still pending, sometimes rulings such as these help Gibson change its tune.

“They’ll say they’re looking for collaboration, but I don’t see that,” Bienstock said. “I hear talks of license deals, but that effectively means they are not collaborating.”

In the end, Bienstock said he wants what is best for his clients and the guitar industry as a whole.

“Our clients have been making and advertising these guitars for many years and want to continue to be able to be free and clear to do that, which I think is their right,” he said.