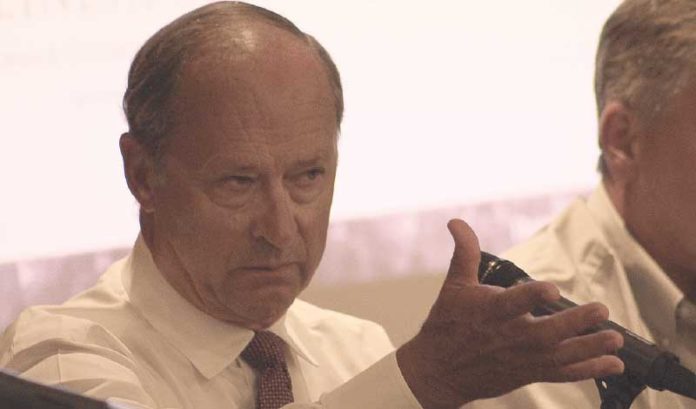 Bob Koar, a veteran of the banking industry, recalls when a client of his was a victim of a cyberattack before people really understood what a cyberattack was.

You know, back when people still used fax machines.

“A fax came in from a customer’s office, at least we thought,” he said. “We had a double approval on it. We authenticated it and we thought it was good. It wasn’t. We missed it and we sent out $50,000 to an account in Zurich.”

“You have to question everything,” he told the audience. “And you have to always be suspicious.”

“They will attempt to make efforts to get into your system from the outside,” he said. “And it’s more than just sending phishing emails.

“They will leave little memory sticks with your company’s name out in the parking lot and see if anybody plugs it in. They will send emails with attachments based on information on your social media pages that show you went to a certain conference, which everybody wants to promote that you went to that and got all this wonderful information.

“They’ll say, ‘Oh, I was at the conference. Here’s an article I wrote on a subject very similar to what you were talking about that I thought you might find helpful.’ And then see if you opened it up.”

Protecting yourself and your company is not easy.

That was the feeling of David Singletary, software project manager at Wiss.

“People are becoming more mobile, and they want to access data on their smartphones or tablets,” he said. “And what people tend not to think about is when you give your employees access to your data on their smartphones or their tablets; how well are those devices protected? Because, unfortunately, people lose their phones, people lose their tablets. And, if they are not protected, people out there have access to your data.”

Singletary said companies need to be vigilant, especially when it comes to vendors. Cyberattacks can come from viruses embedded in emails that vendors have sent you, he said.

“You have to make sure you think about all the points of entry,” he said.

Koar said you have to be especially vigilant when it comes to distributing money. In the banking industry, that’s not as easily done as one would think.

“Banks have a desire of wanting to service the clients and, at the same time, make sure that the clients don’t become their own worst enemies,” he said. “So, we want to give flexibility, we want to give the client what they need to manage their business, but, in doing so, sometimes we get to the point of a very vulnerable situation.

“Think about doing wire transfers. Every business owner is going to do wire transfers, so there’s a concept of double approval. Most people don’t want to do that because they don’t like having to make sure that they have a second approval.

“You want to go to that client and say, ‘You’re really making a big mistake by not having a double approval or double release on your wire transfers.’ And they say, ‘I don’t care, it’s too cumbersome.’ ”

Such obstinance can lead to a loss of the business. For the bank.