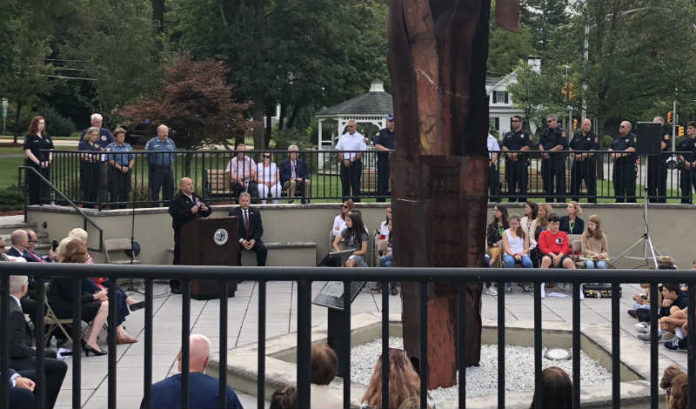 As he lay there, trapped under a massive wall of concrete — unaware that it was part of the South Tower of the World Trade Center that had just collapsed on top of him — Will Jimeno prepared to die. For the first time that day.

Jimeno, speaking to a group of middle-schoolers in Morris Plains this week during an event to commemorate 9/11 at the town’s memorial, explained the simple gesture he made next and why he did so.

“Do you guys know what this means in sign language?” he asked, holding his thumb, index finger and pinkie finger up — while keeping his middle finger and ring finger down. “It means. ‘I love you.’

“This is something I always did to my wife and my little girl. So, at that point, I took my hands and I crossed them over (my chest), because I figured I was going to die and, if they found me, hopefully they will tell my wife, this is the way they found me, so she would know that I was thinking about her.”

He did this while Dominick Pezzulo, the fellow officer who spent nearly a half-hour trying to free Jimeno instead of climbing out of the rubble, was succumbing to injuries he suffered when the area was pummeled during the collapse of the North Tower.

It was a second round of terror for Jimeno, Pezzulo and Sgt. John McLoughlin, perhaps the only people who survived the first tower’s collapse.

“Everything started happening again,” Jimeno explained to approximately 250 people in attendance. “(It was) just like before. Concrete was coming down really, really bad.

At that moment, Pezzulo yelled to McLoughlin, who was trapped approximately 15 feet away, close enough to be able to lead the officers by voice.

Pezzulo, Jimeno remembered, told a joke in his final moments.

Jimeno said Pezzulo then took out his gun and fired it up through the only hole they could see in the rubble, in a last-ditch effort to attract attention from above.

“And then he died right next to me,” Jimeno said.

Jimeno and McLoughlin’s fight to be rescued was just beginning.

Jimeno said he was living the American Dream when he got up on what started as a beautiful day on Sept. 11, 2001.

The son of Colombian immigrants, he had served four years in the U.S. Navy before returning to civilian duty with the dream of becoming a police officer.

“I wanted to give back to the nation that gave my family so much,” he said.

After six years of effort, he landed on the force at the Port Authority, graduating from the police academy in January 2001.

His personal life was perfect, too, Jimeno said.

“Six weeks before the attacks, me and my wife, Alison bought our first home in Clifton,” he said. “She was pregnant with our second baby coming (in November). Life was good.

“On the morning of 9/11, I got up like I did every day, and got ready for work. I walked into the bedroom, kissed Alison goodbye, kissed her belly, walked into the other room and kissed my little girl, Bianca, goodbye.

“My job was never a job to me. I loved being a police officer, so it was never work for me. I would skip down the stairs every morning and jump into an old Bronco and go.”

On this day, shortly after he was given his assignment at the bus terminal, he was called back to the police headquarters — along with every other officer on duty. He hopped on a bus with 20 other officers and headed to the towers. He said none of the officers understood the gravity of the situation until they got within blocks of the towers.

“The bus went silent,” he told the crowd. “It was like a war zone.”

He and Pezzulo met up with McLoughlin, who was looking for volunteers — officers familiar with the use of the Scott air packs that firefighters use. Being recent graduates of the academy, both Jimeno and Pezzulo were familiar.

They volunteered and were quickly joined by officers Antonio Rodrigues and Christopher Amoroso.

Jimeno said he froze in the moment.

“I turned around to look from where we came and I could look into the lobby of Tower 2 and I saw a humongous fireball after I heard a humongous boom,” he said. “I’m standing there with my helmet, just shaking. I’m just standing there. That’s when Sgt. McLoughlin said, ‘Run toward the elevator.’

“I was in the middle of the buildings, and as I turned, something picked me up and just slammed me on my back and the whole building (came down). It’s just coming down on top of us and I’m on my back. One thing a cop never gives up is their radio. That’s our lifeline. So, I go from my radio and I’m yelling, ‘8-1-3,’ which is our code for officer down.

“It seemed like it lasted forever and then it just stopped, and I found myself in a dark hole. I couldn’t see anything. About 30 feet up, there’s light coming in and I could see it, but everything looks like chalk; it’s all just dust. And I’m on my back and there’s literally a wall covering my whole left side of my body.”

“Fireballs started falling into the hole. Literally, balls of fire,” he said. “These fireballs kept coming toward me and I can’t move. I knew they were burning my arm, and I knew if they caught my uniform, I’d burn alive.

“I kept just yelling, ‘Sarge, I’m going to burn.’ He said, ‘Keep focused.’ Somehow, they put themselves out.”

The terror would continue.

“Dominic’s gun was on the ground,” Jimeno said. “These fireballs heated the gun. All of a sudden, it was, ‘Pow, pow, pow.’ The gun is shooting above my head. All I could do is take my hand and put it over my face, hoping that a bullet wouldn’t go through. But I knew better than that. I knew that I would die (if I got hit). But, somehow, some way, the gun finished firing and I was still alive.”

The battle to survive was just starting. And Jimeno admitted, it sometimes did not feel like it was worth fighting.

“As time progressed that evening. I can’t express to you how horrible it was,” he told the audience. “Three things my mother instilled in me is having faith, hope and love, but at that point, I wanted to die. I made my peace with God. I said, ‘God, thank you for 33 great years. Thank you for four great years with my little girl, Bianca, and for my beautiful wife, Allison.’

“I said, ‘Lord, if I’m going to die today, at least I died trying to do the right thing and helping people get home.’ And I closed my eyes.”

What happened next was a moment we all hope for.

“I had a dream or a vision, whatever you want to call it,” Jimeno said. “I see a man coming toward me with a white glowing robe, no face, brown hair. Over his left shoulder is a pond with beautiful trees and over his right shoulder there’s an endless sea of grass. And a peace came over me.

“I asked God for two things. One is to somehow, some way, let me be there for the birth of my little girl. I knew I wasn’t going to make it, but I’d like to be there somehow looking down to see my wife give birth.

“And the second thing is (that) I wanted a glass of water because I was so thirsty.

“I closed my eyes. I was ready to die. But when I saw that vision, this figure is coming to me, and what do I see? He’s got a bottle of water in his hand.”

That, Jimeno said, changed everything.

Jimeno asked the students a question: Where does courage come from?

“I want you to remember this,” he said. “It comes from overcoming your fears. There’s not a person here, whether it’s a police officer or firefighter, EMT, or your parents, that haven’t felt fear in their life. And how you become courageous is by overcoming those fears.”

Jimeno said there were a lot of heroes that day.

“Total strangers were helping each other. And, I thought to myself, ‘If these civilians can be this brave, us in uniform have to be three notches above them.’

“I saw a lot of love that day. The terrorists didn’t expect the (people) in those buildings to stand up and help each other. And that’s what we were doing. No matter how bad it was, we were helping each other.”

Two Marines, Dave Karnes and Jason Thomas, heard Jimeno and McLaughlin under the rubble. Those two and many others worked hours to get them out.

When he reached the surface, Jimeno finally let out his emotion.

“That’s the first time I cried that night,” he said. “I didn’t cry when the guys died. I didn’t cry from my pain and all the horrors down there. I cried when I asked, ‘Where is everything?’

“A firefighter looked at me and said, ‘It’s all gone, kid.’”

He cried again when he reached the hospital.

“I asked, ‘Where is everybody?’

“They said, ‘You’re it. There are no more survivors right now.’ That really broke my heart.”

Jimeno spoke in Morris Plains on 9/9.

He doesn’t give talks on 9/11. That day is for reflection.

“I just spend it with my family and try to appreciate what we should appreciate every day: Life,” he told ROI-NJ.

That message needs to be spread, he said.

“I tell everybody, no matter what the situation, if you make it through it, you’re blessed,” Jimeno said. “There are so many other people who don’t have the opportunity to keep going.”

It’s the message he tried to leave with the schoolchildren.

“What’s important about this story is that I’m here to show you that 220 stories fell on me and my sergeant and we survived,” he said. “People always say to us, ‘We can’t think of anything worse than the World Trade Center falling on you.’ And what I want everybody here to learn today is that we all have our own World Trade Centers. It’s what we do with ourselves when we have a World Trade Center moment. That moment could be that you lost a loved one. You found out you got cancer. It could be as big to you as overcoming a test.

Jimeno hopes his message will resonate for years to come.

“You guys are our future,” he said at the memorial. “That’s why I’m honored really to be here today because I’m getting to talk to you guys, my heroes, the people who are going to lead our nation, lead our world. Don’t ever forget that.

“So, when you look at this steel beam (from the World Trade Center), every time you come by here, remember what that symbolizes. It symbolizes bravery, symbolizes courage and symbolizes that evil will not triumph.”