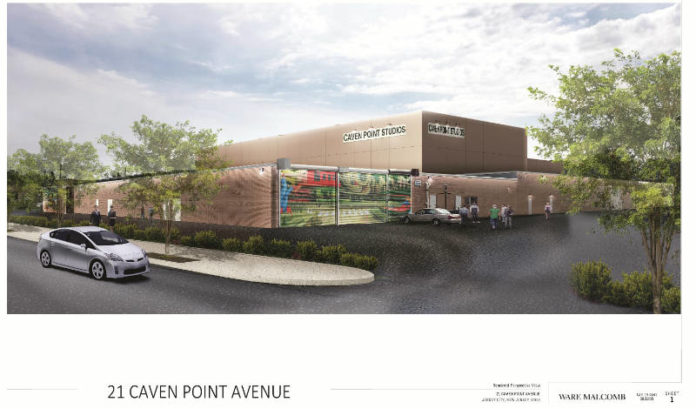 Following the passing of the Garden State Film and Digital Media Jobs Act last year, the spotlight is now on Jersey City, as it plans to open the state’s largest movie and television studio complex next spring.

“Jersey City has seen an influx of major productions utilizing all parts of our city to film large-scale projects, ultimately creating a heavy demand for the proper space studios and networks struggle to find,” Jersey City Mayor Steven M. Fulop said. “Not only will this bring even more production activity to the area, but this also will benefit Jersey City further as production companies stimulate the local economy, provide various employment opportunities and contribute to the redevelopment in the southern part of our city.”

“We are excited to bring Caven Point Studios to Jersey City and Canal Crossing,” said Shibber Khan, founder and principal of the New York City-based Criterion Group LLC, the owner and real estate developer of the project.

“We believe the development of Caven Point Studios is a natural progression of our business because of its proximity to New York City and the creative community, (and) that the sheer size and quality of (the studio) will make Jersey City competitive with other film production facilities, not just in the tri-state area, but on a national basis.”

The revitalization of New Jersey’s motion picture and television industry is due largely in part to the reinstatement and replenishment of the state’s incentivizing tax credits for film and digital media productions, bringing recent productions such as Warner Brother’s “Joker” and “The Many Saints of Newark,” NBC/Universal’s “The Enemy Within,” HBO’s “The Plot Against America” and Apple TV’s “Little America” to Jersey City, which serves as a versatile and conveniently located city backdrop.

“The state-of-the-art studios being constructed by Criterion Group LLC is a huge step forward for Canal Crossing and will help pave the way for Canal Crossing to move forward with the promise and potential that the redevelopment plan was built around,” Bob Antonicello, project adviser with GRID Real Estate LLC, said. “The marriage of film, the creative community and a high quality mixed-income residential community will make Canal Crossing unique among Jersey City’s 94 redevelopment areas.”

“We are looking forward to opening the doors to the film community in the near future,” Khan said.