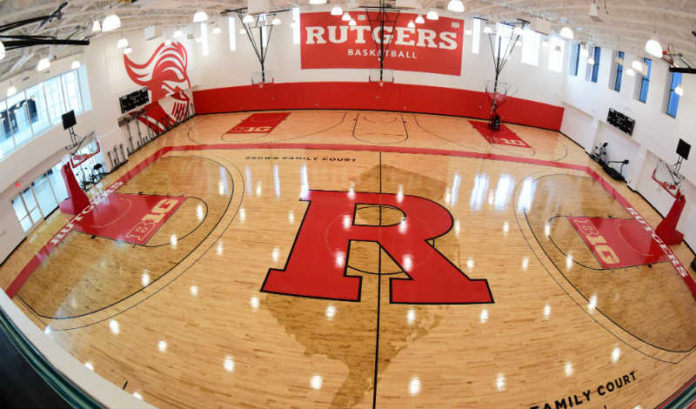 Rutgers University unveiled Thursday the RWJBarnabas Health Athletic Performance Center on its Livingston Campus in Piscataway, designed to serve not only as a premier training facility for the Scarlet Knights, but also for the university’s world-class sports medicine program.

“At Rutgers, we provide our students with the best resources, opportunities and facilities to help shape their goals and dreams — this athletic training facility is yet another example of that,” Christopher Molloy, chancellor of Rutgers University-New Brunswick, said. “Because of partnerships like the one we have with RWJBarnabas Health, we are able to create yet another learning lab that will support a best-in-class sports medicine program for our students, with affiliated physicians and practitioners, including pharmacists like me, who can (utilize) their skills while training the next generation of health care providers interested in sports medicine and athletic training.”

“We always are looking at how we can expand and extend the runways for our students, to give them more opportunities to make the best of their careers that they possibly can,” Robert Barchi, president of Rutgers University, said. “We have great students with great potential, and we owe this to them.”

With the Rutgers Athletic Center being the last building opened for Rutgers Athletics, in 1977, Patrick Hobbs, director of intercollegiate athletics at Rutgers University, said the RWJBarnabas Health Athletic Performance Center makes a great new statement for the organization.

“This center is now a benchmark of which other collegiate and professional sports facilities will be measured, because, in short, there is nothing like this facility elsewhere,” he said.

The facility was built as part of the Rutgers Athletics “R Big Ten Build,” which utilized nearly $25 million in tax credits under the Economic Redevelopment and Growth program and more than $75 million in private donations for new athletic facilities. The RWJBarnabas Health Athletic Performance Center will be the first of three, to be followed by the Gary and Barbara Rodkin Academic Success Center to support the academic achievements of Rutgers student-athletes while also serving as a new home base for Rutgers lacrosse and soccer teams, and an enhanced football training complex.

“When we started talking about this building nearly six years ago, the question was how the heck were we going to get it done,” Barchi said. “Then, we started having conversations with Barry Ostrowsky.”

Mark Angelson, vice chairman of the Rutgers board of governors, said he had known Ostrowsky, CEO and president of RWJBarnabas Health, for more than 50 years, after being classmates and fraternity brothers with him as they both graduated from Rutgers college and Rutgers law school.

As the exclusive health care provider of Rutgers Athletics, RWJBarnabas Health has developed an academic and clinical partnership with the university that will result in dozens of new medical research positions, internship and residence opportunities, and millions of dollars in further investment, Hobbs said.

“So, between our academic relationship, our clinical training relationship and our commitment to medical research, this is a collective investment in a great state comprised of a diverse population, all of whom deserve the best,” Ostrowsky said. “We look forward to celebrating great accomplishments together in the years to come.”

Though it broke ground in November 2016, it will now help to provide Rutgers University and Rutgers Athletics with comprehensive health care from specialists who best understand athletic needs, including nutritional medicine and preventative care. With modern technology, including X-rays and hydrotherapy stations, and three clinical and exam spaces, the nearly 700 Scarlet Knights will be receiving the very best in medical care.

“Within these walls, education, training and patient care will coexist, and Rutgers will once again be at the center of it,” Molloy said. “The impact this will have on our students, sports medicine physicians, athletic trainers and our student athletes will be significant.”

Steve Pikiell, men’s basketball coach at Rutgers University, said the new facility will not only give student-athletes the ability to better balance their athletic and academic responsibilities, but also will help the university in its collective recruiting efforts.

Arella Guirantes, women’s basketball player and a junior studying journalism at Rutgers University, said she could not agree more.

“Around this time last year, because the largest career fair in the state takes place in the Rutgers Athletic Center, me and my team would be across campus practicing, away from our locker room, without a meeting space and without our athletic trainers,” she said. “This took time away from our academics and professional growth, as well as limited our opportunities to put extra work in at the gym, when the most valuable resource a student athlete has is time.

“That is why today I could not be more excited and thankful to be speaking here at the Athletic Performance Center’s grand opening.”

Barchi, who recently announced his retirement in June 2020, said he’ll look back on the creation of the facility with the fondest of memories. “And I’m sure the teams and athletes who use this building will do us all proud.”

Brookdale to build $2.5M Center of Excellence for Cybersecurity