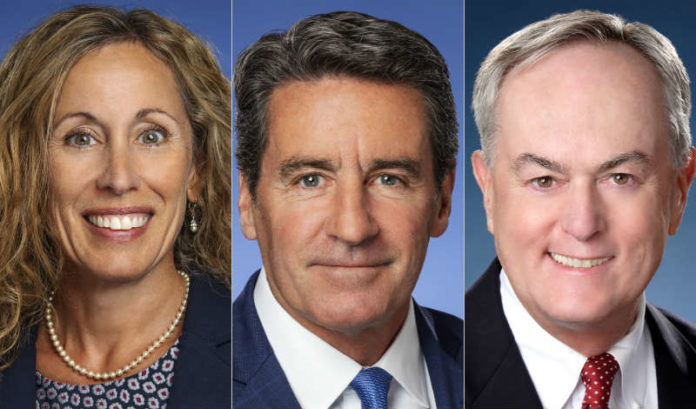 Gibbons P.C. will announce the opening of a regional office in Red Bank on Monday morning, a move the firm’s leaders feel will strengthen its already strong presence in the state.

James Zazzali, a former New Jersey Supreme Court chief justice and state attorney general, will be one of the leaders of the office, along with Stephen Reynolds and Kelly Ann Bird.

Gibbons Chairman and Managing Director Patrick Dunican said the opening of the office at 141 W. Front St. is a strategic move for the firm, which now has three offices in the state and eight in total, including one in Philadelphia.

“Building on our longstanding presence in Newark dating back to 1926 and our successful expansion into Trenton in 2002, Gibbons continues to invest in New Jersey, which is the cornerstone of our regional growth strategy,” Dunican said in a statement.

Dunican feels the move is right for Gibbons, widely regarded as one of the state’s top firms, specializing in public and private sector projects, transactions, lobbying initiatives and wide-ranging litigations with statewide implications.

Dunican said Gibbons expanded into Red Bank because it is a linchpin of Monmouth County, which boasts an economy and business base that are microcosms of the state’s overall economy and business base, and which is home to numerous industries represented among the firm’s most significant clients. Nearly half of Monmouth County’s Top 10 employers are Gibbons clients, Dunican said.

Reynolds, a director in the Commercial & Criminal Litigation Department, is the former executive vice president, general counsel and secretary of Aramark and global general counsel of Alcatel-Lucent.

Bird is a director in the Employment & Labor Law Department and leader of the Gibbons Workplace Training Academy.

Gibbons feels Monmouth’s economy not only is robust, but its largest industries are all important segments of the Gibbons client base, including local government; public and private hospitals, broader health care services, and institutions of higher education; retail trade, and, in particular, grocery stores; hospitality and food services; and professional, scientific and technical services. Most of these industries are also among the top employers in the state overall, meaning that many sectors that are most critical to the county’s economy are also those most critical to the state’s economy.

With an eye toward the future, Gibbons officials said they also are looking beyond the firm’s current client base to determine those industries in which the firm plans to expand its existing reach, as well as those it hopes to break into, again finding that Monmouth County’s fastest-growing and target growth industries coincide with target growth areas for Gibbons. These include some sectors that are already significant, such as those mentioned above. Others are up-and-coming sectors in the county, including business enterprise management, social assistance, personal care services, information technology, telecommunications and finance.

Unanswered questions: Employers likely to be able to mandate vaccines, but...