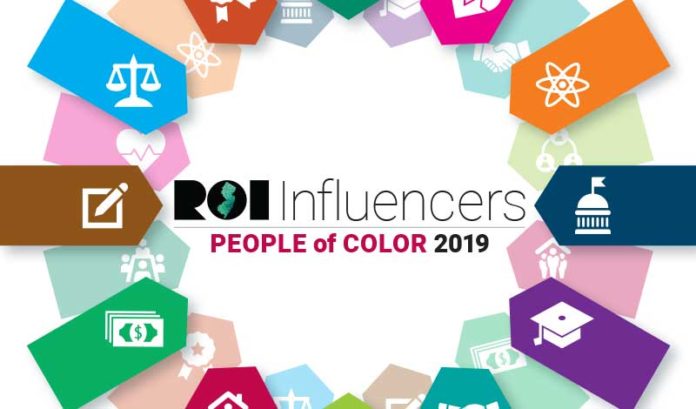 As we approached our second annual ROI Influencers list of the most impactful People of Color in New Jersey, it became clear that we still haven’t answered the biggest question from our first:

Is singling out people of color for their influence and accomplishments somehow defeating a goal of so many ethnic minorities: to be seen in the same light as everyone else — and not for their ethnicity?

Aisha Glover doesn’t feel that way. The head of the Newark Alliance is a mover and shaker who can be found on many lists. She’s glad to be on this one.

“I strongly disagree with the idea that this just perpetuates these systems of separation, segregation and racism,” she said. “Because the barriers and the system that we’re operating within are so institutionalized that we have to have these conversations.

“We have to have uncomfortable moments,” Glover said. “Otherwise, we’re just perpetuating all these institutionalized systems.”

(READ: TIPS FOR LEADERS IN HEALTH CARE — AND ELSEWHERE — WHO WANT TO BE INCLUSIVE.)

Her words were powerful. And were the start of a thoughtful discussion. One that proved to be more insightful than uncomfortable.

For starters, she was OK with the use of the term “People of Color.” Because, she said, ROI-NJ was using it correctly.

“I think how you guys have been approaching it and thinking about it is right,” she said. “If you are being comprehensive on the list — so it’s blacks and Latinos and Asians … then ‘People of Color’ is appropriate.”

Of course, color has its own issues. I’ve seen that in my own household. My wife is Hispanic. And some of our kids look more like me and some more like her. There’s a noticeable difference in their skin tone — to the outside world.

Two of my sons got a job at the same fast-food restaurant this summer. No one picked up on the fact they were brothers — and only one was initially spoken to in Spanish.

Glover — whom many may not know is half black and half Puerto Rican — understood the issue. “Colorism” and your ability to speak a language are tests ethnic minorities often face within their own community.

She said she has her own “Julian Castro moments,” when Spanish speakers will question why she can understand Spanish (about two-thirds of a conversation, she said) but chooses to reply in English.

“What you’re getting is a flavor of how deeply rooted the system of race and racism is in our country and beyond,” Glover said. “That’s why colorism is even a thing, because if it wasn’t and we didn’t live within these structures, then people wouldn’t be so divisive in their labels.”

“I think that that’s the crux of why you do this list.

“It’s not, ‘How do we just be overly politically correct about this?’ It’s just recognizing that, even within all these institutions, there is significant under-representation of gender, of race, of ethnicity, of sexual orientation and preference of everything that is considered ‘other.’

“It’s recognizing that this exists, and taking a piece of that and saying, ‘Who are some of the people of color who are trying to advance things across the state in a more equitable way, making sure that folks are at the table and their voices are heard, and they themselves have become influencers and institutions in some respect?’ ”

That, of course, is the reason we do the list.

Being influential and a member of the Hispanic, Asian or black community does not necessarily place you on this list. Using those positions to advance the workplace — and the greater society — does. And, the onus doesn’t just rest on people of color to advance these conversations and push toward equity. We all have to use our own influence, platforms and publications to do the same.

Why we chose ‘People of Color’

The only thing harder than picking this list was deciding what to call it. We opted for “People of Color” because that is the phrase many ethnic minority groups now prefer. (We realize some do not like it.)

The impetus for the list can be traced to the fact that New Jersey will soon become a majority minority state — meaning more than half of its population will be non-white. In order to be considered, one had to fall under that definition of minority, including those who identify as Hispanic, African American, Asian or multiracial.