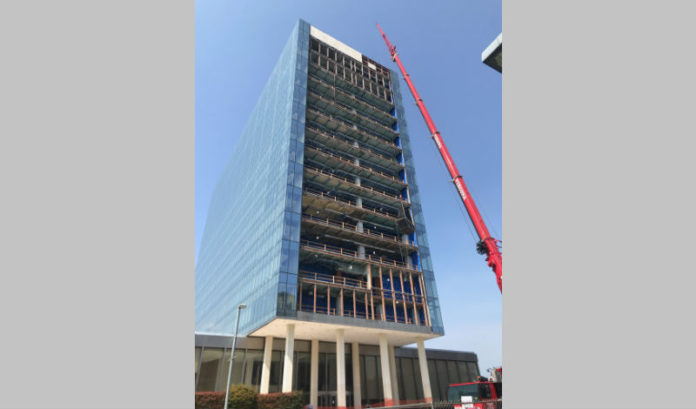 ON3, a 116-acre campus in Clifton and Nutley, has hit the ground running this summer with several key projects at the mid-way point or near completion, according to developer Prism Capital Partners.

The progress, Prism said, will be followed by multiple key milestones, including the first corporate occupant and the opening of the redevelopment’s first structured parking.

The company also constructed a 2,500-space parking garage which it says will serve both 100 Metro and the adjacent, 15-story 200 Metro Blvd. The garage, Prism said, will be finished in time for the fashion brand’s occupancy in October.

At 200 Metro, Prism said it is removing the building’s east-facing facade and replacing it with a new, glass exterior.

“Ultimately, 100 and 200 Metro Boulevard are key components of the next-generation, mixed-use complex we envision at ON3,” Edwin Cohen, principal partner, Prism, said. “The work being completed at both buildings, and the introduction of the first structure parking in the campus’ history reflect the major steps forward we are taking.”

Prism also added and rebranded streets on the east portion of the campus, installed new sewer and storm water systems, and orchestrated electrical grid enhancements. On the west wide, it developed a roadway network.

Plans are also being finalized for a proposed, four-story, 164,000-square-foot speculative laboratory.

“The expansion of R&D facilities at ON3 signals the region’s continuing rebirth of life sciences and biotech on a site that was once home to healthcare pioneer Hoffmann-La Roche,” Cohen said.