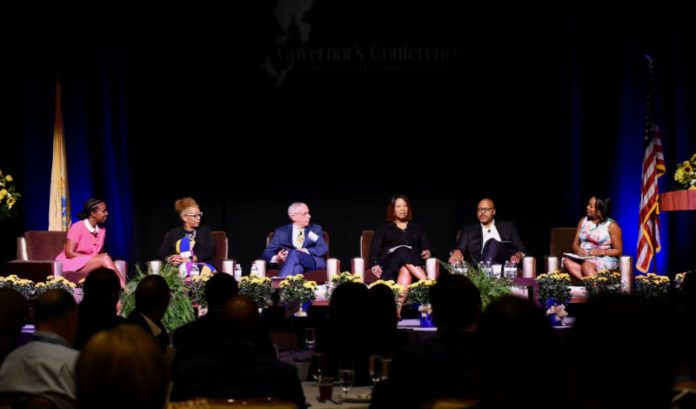 Mayor Frank Gilliam of Atlantic City said it was a great opportunity to host the 2019 Governor’s Conference on Housing and Economic Development on Monday and Tuesday at Harrah’s Resort.

“There are a lot of great things happening in our city and it has a lot to do with the partnership we now have with the state,” Gilliam said. “It’s important for us to take advantage of times like this, because we don’t often have these types of brains in one room working to figure out how we can improve cities and communities like ours.”

Lt. Gov. Sheila Oliver (serving as acting governor with Gov. Phil Murphy abroad in India) said the conference always had been designed to bring industry leaders together not only to inspire new ideas, but to better identify and collectively address challenges in New Jersey.

“The governor and I have no doubt that the collaboration between industry leaders at this conference will help to build upon our success as a state in the future,” she said.

To begin, each agency described what it has been working on over the past year for all 565 state municipalities.

“Under Charles Richman’s tenure as commissioner, we developed new technology that now enables us to allow municipalities to electronically remit financial data to us, which improves our analytics and data mining to be able to make decisions about policy in real time,” Oliver said, speaking as both lieutenant governor and as commissioner of the DCA. “Also, thanks to Christopher Wheeler, chief data officer at NJDCA, we are now able to help municipalities up their game by using technology that will better define neighborhoods and target where opportunistic properties are, offering mayors, developers and real estate investors real time data in neighborhoods ripe for development.

“We are no longer making knee-jerk decisions about how we award contracts and where we invest money — if we utilize data instead of emotionality or politicism to appropriately allocate resources and investments toward that which will yield a differently quality of life for residents, we will be contributing to the governor’s objective for a stronger and fairer New Jersey.”

Richman, now executive director of NJHMFA, said that, in addition to greatly expanding the agency’s ability to provide first-time homebuyer mortgages, he and his team attempted to incentivize the private sector to develop housing where children have better educational opportunities, where transportation is better developed and where jobs are available.

“We’ve done this through changes to the Qualified Allocation Plan, as well as how we allocate other tax credits,” he said. “When you create a plan that is well-funded and well-subsidized, it works. For example, now we’re seeing communities apply for affordable housing that never have before.”

Tai Cooper, vice president for policy and communications at NJEDA, said her office has been busy creating new task forces.

“We’ve created an Office of Economic Transformation, a policy shop that, for the first time, will embed an economist in everything that we are doing,” she said. “We also created the Office of Small Businesses, with small business assistance programs and business development offices in North, Central and South Jersey.”

Leslie Anderson, CEO and president at NJRA, said that, for more than two decades, NJRA historically has been the agency to go into places that no one else wanted to.

Still, under Anderson’s leadership, NJRA has used its financial resources to leverage over $3.8 billion in new investments, helping to redevelop some of New Jersey’s most economically challenged neighborhoods.

“We also discovered that people didn’t necessarily understand the redevelopment process or project financing, so, we started training tax assessors on what it means when a developer comes to their community and why their community needs that project,” she said. “In this way, we turned tax assessors into advocates — which was critical, because there are some places in New Jersey that don’t get attention.”

“We have several things we are trying to do from that office that hopefully will spread further into New Jersey,” he said.

There was a time, Anderson said, that she believed the government had enough money to solve every pothole in New Jersey.

“But a part of that going unsolved was our prior leadership and our lack of direction to come and work together,” she said.

Therefore, during the panel, one thing Oliver made clear was that, regardless of initiative, New Jersey’s government would no longer act in individual silos, but would more effectively leverage each department’s assets and resources.

“For example, if the NJEDA is engaged in a project, we now proactively ask, what can DCA do to enhance and further refine that initiative? What can NJHMFA or NJRA bring to the table? The idea is to work more interdepartmentally,” she said.

Anderson added to that idea by looping in the private sector.

“In our titles, we have authority, power and position, but if we don’t use that to influence and bring the private sector together, it doesn’t matter,” she said.

Oliver noted that Murphy has worked hard to build a more diverse and inclusive government.

“Too often, there are no women or minorities at the table where mega-decisions about economic investments in our state are being made,” she said. “We have to make certain that there are diverse appointments in each and every governing body and state agency responsible for spending millions in state assets.

“Furthermore, we also have not always listened to small- and medium-sized businesses in this state because, historically, it’s been about the publicly traded Wall Street firms, even though small- and medium-sized businesses are the backbone of our economy. We need to encourage and support emerging developers who want to make commitments to completing projects in communities where they are needed.”

Keynote speaker the Rev. Dr. DeForest B. Soaries Jr. recalled a time that, in order to open up the eyes of New Jersey government, he brought a former governor to a crack house in his neighborhood and put executives from Johnson & Johnson on a bus outside of town to make them realize how downtown redevelopment was not helping local neighborhoods.

However, as Soaries delivered the keynote speech Monday at the Governor’s Conference on Housing and Economic Development in Atlantic City, he said things certainly have improved not only in his own neighborhood as senior pastor of First Baptist Church of Lincoln Gardens in Somerset, but also in areas like Atlantic City.

“This is a new Atlantic City, with a new paradigm of possibilities,” he said. “There is a new spirit in the air, a new leadership where people are being connected with home ownership and employment training and drug treatment.”

However, relying on his experience as the former New Jersey secretary of state and as a nonprofit founder of both the Central Jersey Community Development Corp. and the Harvest of Hope Family Services Network Inc., Soaries said the time has not come to cease economically empowering New Jersey residents.

“We still lack bridges which connect people with existing opportunities — and that’s why we’ve got some folks in our state who are big shots on Wall Street, running hedge funds or acting as venture capitalists, but, when we leave this hotel and walk down the street, we can still see people sleeping outside,” he said.

Perception has yet to be changed, even in New Jersey, he added.

“For example, affordable housing is somehow going to have to be rebranded to ensure that we’re not only talking about low-income housing, but also housing for our children who borrowed $100,000 just to get through college,” Soaries said. “When I describe in Minnesota and Louisiana the income qualifications for affordable housing in Somerset County, they can’t believe it, that in New Jersey, affordable housing is for teachers and police officers and firefighters and young college graduates.

“Unfortunately, even still in this state, there are people who continue to perceive it as a prescription that just can’t work.”

Panelists from various state agencies at the Governor’s Conference on Housing and Economic Development in Atlantic City discussed the 169 Opportunity Zones across 75 municipalities, with each New Jersey county receiving at least one designation.

“What Opportunity Zones give us is the chance to market these 169 zones to an investor class that right now is on the sideline when it comes to most of these communities,” Maurice A. Jones, CEO and president of Local Initiatives Support Corp., said.

While not easy, the process is rewarding, he added.

Lt. Gov. Sheila Oliver, who also serves as the state’s commissioner of community affairs, said the zones were created to encourage likeminded investors and developers to come into neighborhoods they always have been risk-adverse to.

“There is disposable income to be had in many of these communities, despite pervasive myths that they cannot be profitable,” she said. “And if you’re going to get a tax break because you are making a contribution that also will have social impact, I think that’s a fair deal all around.”

Leslie Anderson, CEO and president of the New Jersey Redevelopment Authority, said she didn’t want to take a thing away from Newark, but reminded attendees that smaller towns such as Salem and Bridgeton could benefit, too.

“Sometimes, it’s our inability to get out of our own way,” she said. “Help me get to the other 75 municipalities around the state that also have the designation, because I know there are great projects there.”