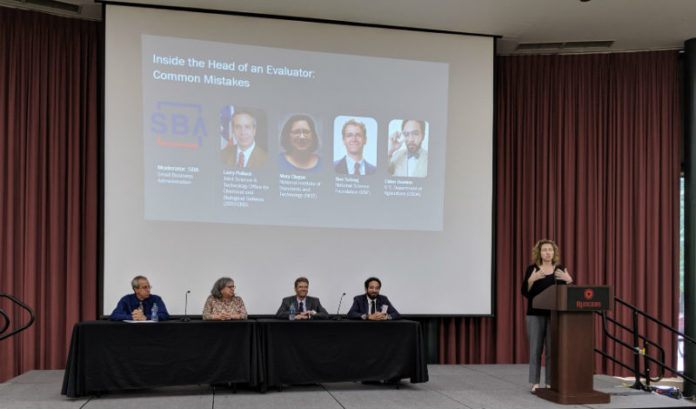 Getting funding for your company can be a challenge.

The U.S. Small Business Administration is no exception, by any means.

Its Small Business Innovation Research and Small Business Technology Transfer programs may seem tedious and highly competitive, but the potential reward and the road to follow may make it worthwhile.

“Some businesses are selling to the government through contracts,” Brittany Sickler, senior innovation policy adviser, Office of Innovation, U.S. SBA, told ROI-NJ. “Many are getting additional investment. I know of some venture capital and angel capital groups who specifically target SBIR companies for part of their portfolio because they know those companies haven’t lost equity because the government hasn’t taken any.”

Sickler said the peer review process is very competitive, with experts that have already done analysis on these companies. This opens these companies up to outside investors because they’ve, in a sense, passed through those gates.

Sickler said investors feel more confident knowing that those companies probably have a higher chance of being profitable and commercialized.

Sickler was speaking to ROI at the New Brunswick stop on the SBA’s 2019 SBIR Road Tour. The tour is a national outreach effort co-sponsored by the SBA with the goal of connecting entrepreneurs working on advanced technologies to a large source of early stage funding through the SBIR and STTR programs.

Potential applicants have a lot of challenges, Sickler said, but there’s something that the successful ones have in common.

“We find the most successful companies are the ones that really do their research and have a lot of support around them,” she said. “They use resources and organizations in New Jersey and New York, the Small Business Development Centers, and they contact the agencies and find out how different their programs are. They really try to see how their technology fits in with those agencies’ missions.”

The “agencies” Sickler refers to are the participating agencies in the SBIR/STTR programs. Federal agencies with extramural research and development budgets that exceed $1 billion are required to reserve 0.45% of the extramural research budget for STTR awards to small businesses. For SBIR, it’s budgets that exceed $100 million, and those agencies are required to allocate 3.2% of their R&D budget.

Each agency has its own criteria and selection process, which may overlap in some regards, when choosing what proposals and companies to fund. Currently, five federal agencies participate in the STTR program, while 11 participate in the SBIR program.

Sickler said applicants who really understand the agency and their technology have proposals that become very responsive. They end up being more competitive across the board when they’re able to articulate their team, the technology and the commercialization potential.

But while applying companies may have a firm grasp on their technology, there are many misconceptions when it comes to the application process.

“The fact that there isn’t sufficient knowledge available within a small company, a one- or a two-person shop, is incorrect,” said Larry Pollack, program manager, Department of Defense Joint Science & Technology Office for Chemical and Biological Defense. “The statistics show that the majority of SBIR awards go to very small companies, rather than ones with 500 employees.”

Pollack was speaking on a panel titled “Inside the Head of an Evaluator: Common Mistakes.”

Pollack said small companies that apply have a just as good, if not better, chance at winning funding through the SBIR/STTR programs.

Mary Clague, SBIR program director/NAIS administrator, National Institute of Standards and Technology, has a different take on one of the myths revolving around the programs: equating them with one another.

“A misconception I hear is people think that all SBIR programs are the same,” she said. “We all work under the same broad guidelines, but every agency is just a little bit different and you have to read every solicitation carefully.”

“The diversity of viewpoints and processes between agencies is always underestimated by folks,” he said. “It’s grants versus contracts.”

Schrag said it’s important to understand the three categories agencies sort the companies into: As someone providing them with a product or service they need, which means they’re your customer. As doing research they previously weren’t focused on, which means you’re a contract research funder. Or as an engine for economic growth, which means they will try to help your company to be commercially successful — what investors do.

Understanding which mix of those three roles the agency really thinks of itself as, Schrag said, is very important in understanding where to go.

For Elden Hawkes, program specialist, U.S. Department of Agriculture, the misconceptions come with the application process itself, specifically its duration.

“One of the biggest misconceptions is that you can put together an application relatively quickly,” Hawkes told the audience of business owners. “I’m sure some people can put one together in a weekend, but I’m sure they wouldn’t want to submit that for funding.”

Hawkes said he always recommends applicants take the time to put together the proposal, so, when it comes through the review process, he’s not seeing three or four different versions of the same application because something was forgotten.

He said it’s not an easy thing to do, regardless of how straightforward it may seem, and there’s a common misconception that it is.

Between Sickler and the panelists, there’s one thing that rang common: The riskier the proposal and the riskier the technology is, the more likely it is to receive funding.

Because that’s what’s likely to be the most innovative.

And that’s the goal of the STTR/SBIR programs, to stimulate the U.S. economy by stimulating technological innovation.

Secrets to being second-gen business owner come to light at ACG...