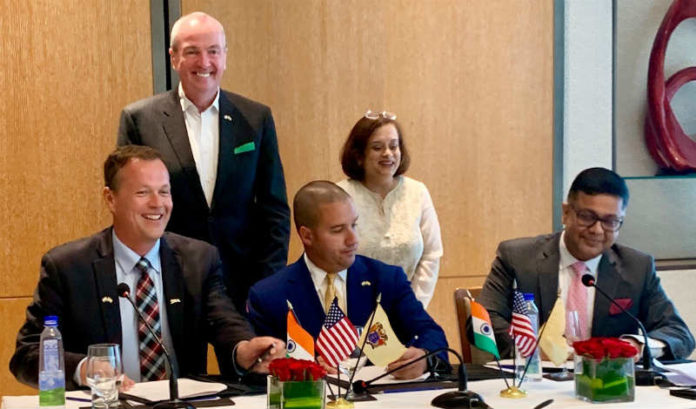 Connections are one thing. Jobs are something else.

Choose New Jersey CEO Jose Lozano said the state is getting both during the seven-day, six-city tour of India that his organization set up for Gov. Phil Murphy and a group of approximately two dozen government and elected officials, prominent business leaders and key players in higher education.

Lozano said the trip could bring as many as 1,500 direct jobs — a conservative estimate, he said on Day 5 of the trip.

“We’ve spent a lot of time selling New Jersey and this week it’s clearly paying off,” he told ROI-NJ.

Three companies based in India with a strong presence in New Jersey have indicated on the trip that they are bringing more jobs overseas, according to Lozano:

Lozano, whose team has been setting up the trip for nearly a year, said he’s thrilled its hard work is paying off.

He credits, however, the attributes of the state.

“Companies are making critical investments in their workforce because it makes great business sense,” he said. “The administration feels the talent, location and quality of life are second to none.

“It’s nice to see those companies who have committed more workers affirm what we believe to be true.”

Lozano said the job numbers are conservative because he expects so much more to come from other agreements — including two with universities on both ends of the state.

Rowan University and the New Jersey Economic Development Authority signed a Memorandum of Understanding with the National Research Development Corp. of India.

Rowan and the EDA both feel the agreement will lead to the NRDC — the largest and oldest technology transfer organization in India — setting up its first U.S. office in Glassboro on the Rowan campus.

And VentureLink, the newly renamed business incubator at New Jersey Institute of Technology, has signed MOUs with NASSCOM, the National Association of Software and Services Cos., and T-Hub that are expected to bring up to a dozen entrepreneurial companies to campus.

Murphy said the partnership is another step in building the innovative economy he envisions for the state.

“We are building nothing less than a new innovation ecosystem,” he said in a statement. “We are making the right investments for an economy rooted in innovation — taking our history as the place where the modern world was invented and building upon that to be the place where tomorrow’s world will come to life.”

“We hoped this trip would create and even greater connection between India and New Jersey and it has,” he said. “More importantly, more are coming. This is just the beginning.”

Cranbury pharma firm files for IPO worth up to $100M