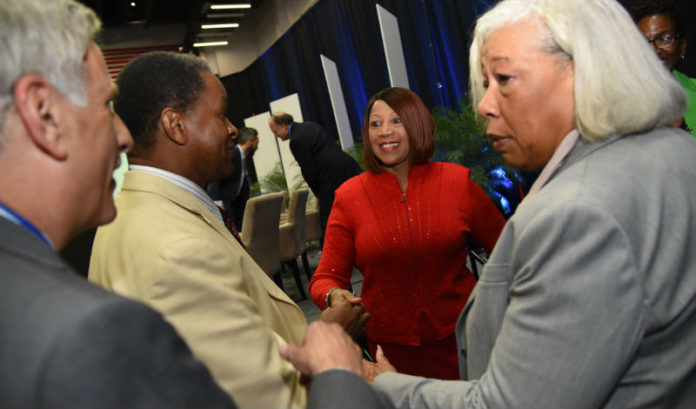 With New Jersey being the fourth-most-diverse state in the union, minority-, women- and veteran-owned businesses comprise more than half of its businesses, Hester Agudosi said.

“But the truth of the matter is, the state has not always been a strategic partner with you,” Agudosi, chief diversity officer at the New Jersey State Office of Diversity and Inclusion, said as she addressed the hundreds of attendees who participated in NJ Connects, the state’s first annual Garden State Minority-, Women- and Veteran-Owned Business Summit, on Friday at the New Jersey Institute of Technology in Newark.

“Our spend has been historically low, despite the fact that you represent nearly 69% of all the firms registered to do business in the state,” she said. “It’s important that diverse businesses owners not only have a seat at the table, but also increased access to information and the ability to establish relationships. That begins today.”

“Through this first-of-its-kind state summit, we hope to connect your business with roughly $1 billion in public and private sector contracting opportunities,” Gov. Phil Murphy said in a statement. “Our goal is to ensure that everyone who wants to do business, both with and within the state of New Jersey, has the tools and support they need in order to succeed.

“Creating a more robust and diverse state contracting supply chain is central to our goal of building a stronger and fairer New Jersey economy.”

Elizabeth Muoio, New Jersey state treasurer and the second woman to serve in the role in state history, said the state spends its money in a wide variety of areas.

“The goal of many of our divisions today is to ensure you have the information you need to register and get certified so that you can avail yourselves to all purchasing opportunities,” she said.

The creation of a more diverse supply chain is not only the right thing to do, but also a sound and more economically engaging business decision, Agudosi said.

“We understand that diversity drives productivity, innovation and constitutes a strong economic engine for our state and region,” she said. “Diversity brings with it competition and the increased ability for the state to leverage the assets it has, including the diversity of its citizens.”

George Helmy, Murphy’s chief of staff, said the return on investment in 2017 for large organizations that had 20% of their spend in diverse supply chains was 133%.

“Data shows us that minority businesses are being more innovative and efficient than other businesses and are growing at a higher clip than the national sales average, nearly double the rate,” he said. “So, when the governor and lieutenant governor give the directive to make these kinds of investments and changes into the ways we procure and do business, we do it not only because it is the right thing to do as one of the most diverse states in the nation, but also because it makes terrific business sense.”

Matthew Platkin, Murphy’s chief counsel, said that, with the state being a big-market player, it should be and is putting its money where its mouth is and fulfilling its values via its purchasing power.

“We inherited a state where the average household made less in 2017 than they did in 2010, and that was even worse for households of color,” he said. “This isn’t something we can do some of the time, it’s something we must do all of the time, and, in one of the most diverse states in America, if we’re not making that a priority, we’re not doing our job.”

Lt. Gov. Sheila Oliver, the first woman of color to serve in an elected New Jersey statewide office, said those in attendance need to be reminded that they not only are business owners, but also constituents and residents of the state.

“We are resource-rich in New Jersey, but, often, it takes a great deal of networking,” she said. “I’ve spent 16 years in the New Jersey state Legislature and we very infrequently see minority- and women-owned businesses knocking on the doors of their local legislators. Your local legislators can enact laws with the support of a governor who can overnight change the trajectory of your businesses — but that means we must also become more politically engaged.”

Oliver recommended business owners begin by investing the time into learning the structure of the state government.

“We have a number of authorities, boards and commissions that I call quasi-governmental agencies, that also have spending power,” she said. “Whatever your business focus is, if you are a provider of goods and services, you need to examine our state agencies to see where business opportunities might exist.”

For example, Platkin said, with the recent reinstatement of the Garden State Film and Digital Media Jobs Act, a number of major motion pictures and television shows have filmed here since the tax credit was put back in place.

“We also were the first state in America to include a diversity and inclusion rider in the tax credit, which means if a certain percentage of your cast and crew are of diverse backgrounds, you get a 2% bonus,” he said. “And, when the governor was in Hollywood meeting with top executives and production studios a few months ago, every single one of them said the reason they were looking into filming in New Jersey was because of that rider, because their casts, crews and talent demand it.”

Muoio said the Department of Treasury, the largest procurement arm in the state, also has been hard at work selecting suppliers for massive projects.

“Together with our Division of Purchasing and Procurement, Division of Property Management and Construction, Division of Investments and Office of Public Finance, we are responsible for approximately $2 billion annually in spend in this state,” she said. “We have tremendous purchasing power in a richly diverse state and we want to make sure that the opportunities are available to everyone in a way that reflects that.”

For example, the construction of new buildings for the Department of Health and the Division of Taxation are two of the largest construction projects the treasury has seen in Trenton in many years, Muoio added.

“With roughly $160 million spend between the two, we hosted two well-attended information sessions together with the New Jersey Economic Development Authority to try and reach small, minority-owned, women-owned and veteran-owned businesses to make sure they had the opportunity to apply and work on these projects,” she said.

As a result of the outreach in Trenton, 26% of the construction contractors for the Department of Health building are minority-, women- and/or veteran-owned.

“We also are in the final stages of going out to do a statewide disparity study in New Jersey, which is long overdue,” Muoio said. “A priority of our governor from Day One, this will give us the tools and the information we need to know where our strengths and weaknesses lie in our procurement strategy, while giving Hester and her office the tools she needs to make sure we can implement strategies moving forward.”

“But, there are natural synergies between us in New Jersey and international companies, highlighted by the fact that the governor, using no tax incentives, brought home well over 1,000 jobs at expanding Indian companies with presences in New Jersey,” he said.

Over the nearly two years as governor, Murphy has traveled to countries including Israel, Germany and India in pursuit of lucrative business opportunities with the state of New Jersey.

“We now know that we have to broaden our thinking to accept the fact that there now exists a global economy,” Lt. Gov. Sheila Oliver, said. “There are international business operations that are cutting into our consumer market, so we have to partner up and explore ways that we can benefit from business being done in other places as well.”

Oliver said she is eager to work with the governor to travel to West African nations next.

“We have a growing West African population in the state, many of whom are attached to business leaders in their respective companies that desire the opportunity to have New Jersey businesses come do business with their nation,” she said. “More underdeveloped nations are in need of the professional expertise we have here in our state to help move their countries forward.”

N.J.’s Asian Americans gaining influence — but not all in same...