Home Health Care From the ashes: Robinson’s grief spurred her to help others cope with...
Facebook
Twitter
Linkedin 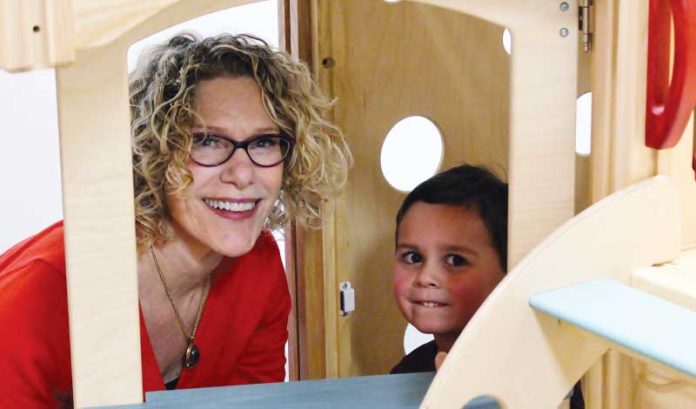 Mary Robinson was a textbook case: Her grades fell, she stopped showing up to class and then dropped most of her extracurricular activities. She was a grieving teenager; her father died from cancer when she was 14.

And, although she didn’t know it at the time, she wasn’t alone.

There are about 114,000 bereaved under-18 individuals in New Jersey, according to Robinson. But there are not a lot of options for support for that youth … and they were especially absent when Robinson was grieving the loss of her father.

Robinson decided to launch an organization that would help change that. Starting in a church attic back in 2011, she launched Imagine, A Center for Coping with Loss. She has since expanded it to serve 400 children and adults from more than 50 New Jersey towns every two weeks.

The center’s goal isn’t to provide counseling or therapeutic remedies, but to give families the coping tools to deal with loss and receive support from peers. Her center and the approximately 500 like it across the country are marking a change in thinking around how families should grieve.

“It was once thought that you should hide the photos and avoid talking about the loss,” she said. “But that sort of thinking just hasn’t led to good mental health outcomes. And still today, when families come to our centers, it’s often their first time talking together about it. Kids are trying not to be sad around parents, and parents are doing the same thing.”

Even with support, Robinson said adolescents aren’t always equipped to deal with loss at a young age, so they can revisit grief at different stages. Because of that, families that come to the organization’s center in Mountainside, or its new Newark location, are allowed to stay for support along each developmental milestone.

“When you’re a little kid, you may have someone explain to you what death means, but you’ll often hear things like, ‘OK, I understand mommy died, but is she coming on vacation with us?’” Robinson said. “Kids don’t always truly understand permanence, so that person’s loss may not sink in for years. So, it’s important that children have access to support throughout their development.”

Robinson said an example of that would be a boy who experiences the loss of his dad at 5 years old, and has to go through a different grieving process when he’s older and sees all the dads coaching Little League.

That’s part of why the volunteers as well as professional staff at Imagine, A Center for Coping with Loss facilitate support groups in different environments based on developmental groups. In a setting for those under 5 years old, children express themselves through play instead of sitting in a circle talking about grief. But the stories can be just as heartbreaking.

“One time when I was in one of those rooms, a little girl told me to sit and was going to make soup and feed me it,” Robinson said. “And I knew her story. Her dad died after being sick for quite a while. And she used to sit on the edge of the bed and feed him; that was her way of being close to her dad. As she’s doing that with me, she says, ‘I never hugged my dad goodbye, can I hug you?’ Doing that let her work through (what) her experience had been with her dad.”

The center even has a mock hospital room where children can reenact situations they observed with loved ones going through sometimes long periods of illness.

Simple as it sounds, just being able to raise and lower a hospital bed can make a child feel like they’ve regained control in situations in which they felt like they didn’t have it, Robinson said.

“We passed by the room once and a kid told a volunteer, ‘You lay down; you’re the patient,’ and then one of the kids told her, ‘You have a subdural hematoma,’” she said. “That’s an 8-year-old kid that knows that language. But they not might have the vocabulary to put words to their feelings. So, through that play, they can communicate symbolically their story.”

Imagine also provides what it calls the Volcano Room, where children can erupt with physical expression by ripping up phone books, stomping on bubble wrap and punching pillows.

“The idea there is, along with intense emotion, you have a lot of kinetic energy in the body that needs to be discharged,” she said. “When you’re full of those emotions, it’s hard to express yourself verbally sometimes. So, a space like that allows kids use physical movement to discharge that energy and then say more about what they’re feeling.”

Every activity is meant to be an intervention at a young age for potentially unhealthy ways of coping with the painful feelings that accompany a loss, Robinson said.

“These places exist because kids in grief are kids at risk for poor future mental health outcomes: substance abuse, depression … the list goes on,” she said. “It’s so important that we express ourselves and our grief so that we don’t keep it bottled up inside.”

It’s no surprise that Robinson, who felt strongly enough about that message to give up a lucrative career in the wealth management sector, wants to communicate that need for openness in grieving to the wider community. Her organization has been doing a lot to educate school districts and other community groups, raising awareness about the need to give coping tools to children who have experienced a loss.

“People don’t always know when they’re grieving,” Robinson said. “One of the things a mom whose child had a brain injury said to us after coming to our workshop was, ‘For the first time, I understand that I’m a grieving parent.’ Her son was a very different boy than he had been. She felt like she got her life back once she realized she had to grieve the son she had before she could fully love the son in front of her.”

To meet the massive demand there is for grief support of all different stripes, Imagine opened a second location earlier this year in Newark to accompany its Mountainside base.

“We did our homework and found that there was nobody else providing grief support in Newark — a city awash in grief from different types of loss,” Robinson said. “Many children are surrounded by what can be traumatizing experiences, whether it’s not feeling safe walking to school or seeing a high rate of homicide.”

Robinson said Imagine is already quickly outgrowing its space in the southern portion of Newark. Looking ahead, the organization has a goal of embedding more grief support programs in all the different wards of the city.

“People don’t always leave their neighborhood to access resources,” Robinson said. “But we want to reach every family who needs support. And that’s what we plan on doing.”

Grief and the workplace

Grief shouldn’t be ignored in the business world … because, if nothing else, it doesn’t pass unnoticed by a company’s bottom line.

“Grief can affect an employee’s ability to concentrate and be productive in the workplace,” said Mary Robinson of Imagine, A Center for Coping with Loss. “So, the more employers can create an environment that doesn’t stigmatize loss and allows people to be a bit vulnerable, the more likely it is that people can be productive.”

As far as what the best course of action is for employers, Robinson said it depends on what the situation is as well as what a grieving employee’s preference is. No matter what, she says, the loss should be acknowledged.

“Employers can say they’re sorry and ask if it would be helpful to check in with that employee,” Robinson said. “I know someone whose boss checked in with her every morning, and she found it enormously helpful to have that opportunity to say how she’s doing.”

Another aspect worth examining is the workplace bereavement policy. The average three-day policy? Nowhere near enough, Robinson said.

Robinson’s organization has been called on to provide grief support groups in workplaces where there has been employee or owner deaths.

“But, ultimately, our hope is that companies contact us before there’s major loss to deal with — to normalize the idea that we’re all humans and we all respond to loss with grief,” she said.

Most small businesses will be eligible for $50M expansion of EDA...