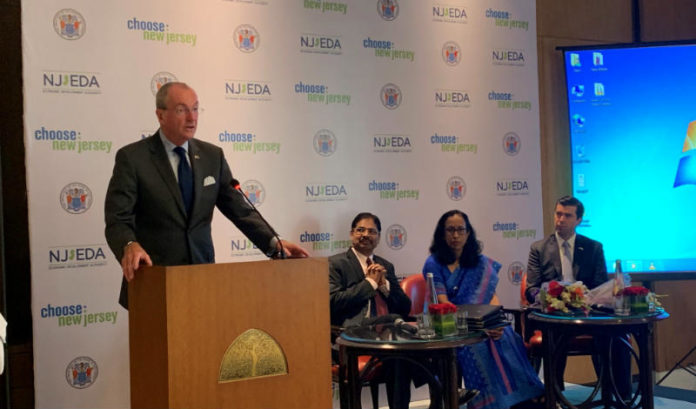 I’m writing this as we begin our initial descent into Newark Liberty International Airport after a historic marathon sprint through India led by Gov. Phil Murphy and first lady Tammy Murphy — the first ever by a sitting governor of New Jersey.

This trip, from my perspective as the head of the New Jersey Economic Development Authority, was a huge success. Here are just a few reasons why:

New Jersey is very well regarded in India: New Jersey is a big deal in India. Everywhere we went, we were greeted with incredible warmth and enthusiasm, and the fact that the sitting governor had dedicated a full week of his time to visit not just the political and economic capitals (Delhi and Mumbai), but also Agra, Hyderabad, Ahmedabad and Gandhinagar, was seen as an enormous sign of respect and commitment within India.

In addition to countless economic development-focused interactions, Gov. Murphy met with Prime Minister Narendra Modi, the foreign minister, the commerce minister, the chief ministers of the states of Gujarat and Maharashtra and a senior dignitary from the state of Telengana. Nearly everything I know about Indian politics I learned in the last 10 days, but that’s roughly equivalent in the American context to getting meetings with the president, the secretary of state, the commerce secretary and the governors of New York, New Jersey and California.

Immediate impact: Gov. Murphy returned to New Jersey on Sunday morning with specific commitments for more than 1,250 new jobs for our residents with India-based companies. And, there are several more very specific conversations that could result in additional jobs for our state. The tax credit price tag for those 1,250 jobs? Zero. These companies (and nearly everyone else we spoke to) were focused on the fundamentals — talent, location and infrastructure (daily flights from Newark to Mumbai and Delhi), quality of life (having the No. 1 public school system and university in the United States is a major calling card) and culture. Incentives came up, but not nearly as often as some might think.

Long-term impact: The delegation planted seeds that will bear fruit for decades to come. Between specific company-level discussions that could lead to new U.S. headquarters in New Jersey, to partnerships between New Jersey academic institutions and Indian counterparts, to two sister state agreements (with Telengana and Gujarat), I firmly believe we will look back five or 10 or 20 years from now and see lots of examples of good stories that start with “When Gov. Phil Murphy first visited India in September 2019…”

Partnerships are two-way streets: Although the primary focus of the mission was attracting jobs and investment to New Jersey, the governor also laid the foundation for partnerships that will benefit both India and New Jersey. In addition to two sister state agreements, New Jersey academic institutions entered into nine new partnerships with Indian counterparts to facilitate academic and research exchanges in both directions. During the mission, the first lady and the delegation also built relationships with nongovernmental organizations focused on shared areas of focus like women’s empowerment, maternal and infant health, and climate change.

The personal touch matters: Particularly for the big, global companies, before they made the decision to choose New Jersey, they wanted to be able to look the chief executive responsible for the state’s future in the eye and hear the pitch directly from him, in their offices. You can’t do that via a conference call. Gov. Murphy has been focused on strengthening New Jersey’s global ties like this since Day One, which is why the EDA created the Office of International Trade and Investment, which partners with Choose New Jersey on trade missions and international business recruitment.

Bringing a strong delegation matters: Kudos to Choose New Jersey CEO Jose Lozano for not just for delivering an extraordinary trip broadly, but specifically for ensuring we had a strong delegation joining us. Having, for example, members of the Legislature from both parties and both chambers (Sens. Vin Gopal and Sam Thompson, and Assemblyman Raj Mukherji) with us demonstrated the depth of importance of the New Jersey-India relationship — and, in the case of Sen. Gopal and Assemblyman Mukherji, the important roles that Indian Americans are playing in New Jersey government. When the governor said that he was focused on deepening the relationship between New Jersey’s higher education institutions and the real economy, it was underscored by having representatives of Rutgers, NJIT, Princeton, New Jersey City University and Rowan University along with us. Having several Indian American private-sector leaders tell their story of why they chose New Jersey to raise their families and build their careers spoke volumes.

Climate change: Given the dynamic in our national politics, it was striking to hear nearly everywhere we went, whether in political or business or informal settings, the recognition of the urgent threat of climate change. The debate in India concerns how, not whether, to make the changes needed in terms of clean energy and energy efficiency. Gov. Murphy’s chief policy adviser, Kathleen Frangione, was also involved in numerous discussions about opportunities to collaborate on a clean energy future.

Traffic: On a somewhat lighter note, the next time I’m stuck in traffic in Newark or on the Garden State Parkway, I will remind myself that it can’t be worse than trying to go 1.5 miles in the rain during Friday night rush hour traffic in Mumbai.

New Jersey will have a permanent presence in India: During his trip, Gov. Murphy announced that Choose New Jersey will open a permanent office in India to coordinate the follow-ups from this visit and to continuously market the state once we are back home. Although we met a huge volume of people and companies (my briefcase is swollen with business cards, and I gave out so many of mine that we had to print more on the fly in Mumbai), in a democracy of 1.3 billion people growing as fast as India is, the possibilities for stronger economic ties to New Jersey are nearly limitless.

Tim Sullivan is the CEO of the New Jersey Economic Development Authority.

Health care delivery is evolving, for better or worse

N.J. is about to legalize marijuana. Our own stem cells should...