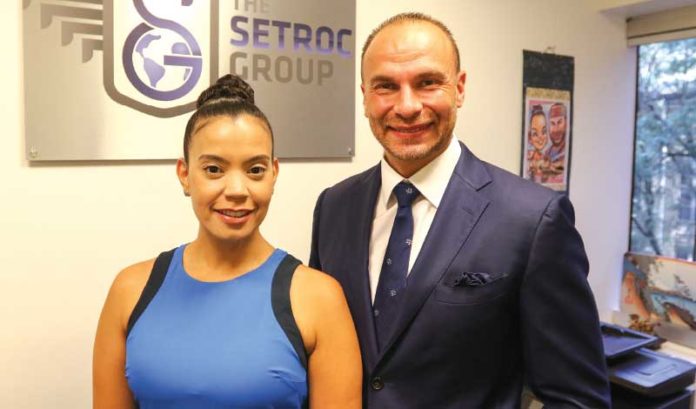 Francisco and Claribel Cortes were able to shoulder bankrolling the launch of their media and marketing startup and, as far as mentoring goes, they had a Rolodex of contacts and two decades of industry experience to fall back on.

In short, among Hispanic businesses in the Garden State, they know they’re the exception, rather than the rule.

“I am the daughter of a small business owner, so I personally saw the struggles of trying to build a business with limited resources,” said Claribel Cortes, co-founder and chief operating officer of The Setroc Group Inc. “Capital requirements hold businesses back. So does a lack of mentorship in the Hispanic business community.”

Claribel is on the Statewide Hispanic Chamber of Commerce of New Jersey’s board of directors. Carlos Medina, the group’s CEO and president, largely agrees with her assessment, which is why the organization is working to improving the lending situation for Hispanic entrepreneurs and get them the mentors they need.

The duo behind The Setroc Group Inc., which in its less than two years of operation is already shaping up to be one of the state’s most influential Hispanic businesses, has a shared goal of growing its spread of private and public clients and becoming that missing mentor for other businesses.

Francisco Cortes, the company’s CEO and a former vice president of Fox News Latino, said he and his wife have had success growing their business with government contract work and certifications, including the Service Disabled Veteran Owned Small Business and Minority Business Enterprise designations.

“But government contracting is difficult to manage,” he said. “As a small Hispanic business owner, you might not have the bandwidth to respond to a 75-page project requirement the state or federal government is putting out.”

“I’m a big advocate of partnerships, which is why we’re pairing up with the AP and some others I can’t mention yet,” Claribel Cortes said. “Other organizations and people can bring to the table resources that you don’t have.”

For various reasons, the amount of businesses aligning and finding partners in other businesses in that way is lacking in the Hispanic sector, she added. Mentoring, once again, might be the panacea.

… we want to build our media company, but we also want to give back and help other enterprises expand as well. Because a lot of businesses really need the help.”
— Claribel Cortes, co-founder and chief operating officer, The Setroc Group Inc.

What sets The Setroc Group Inc. apart from other Hispanic business startups is the sheer number of relationships the Corteses have amassed in the media landscape. They’ve leveraged their expansive network to respond to projects everywhere, such as traveling to Puerto Rico with RWJBarnabas Health to document Hurricane Maria recovery efforts.

Most recently, the company started working with the Carpenter Contractor Trust on the distribution and promotion of its documentary about the carpenters who built the new Governor Mario M. Cuomo Bridge, formerly known as the Tappan Zee Bridge.

“Obviously, we want to build our media company, but we also want to give back and help other enterprises expand as well,” Claribel Cortes said. “Because a lot of businesses really need the help.”

For 16 hours a day, seven days a week, you would find Claribel Cortes interviewing, writing or in some way reporting on the fall of the Twin Towers of the World Trade Center in New York City.

She was working in the newsroom at Fox News when the event happened, and during the all-hours news cycle that followed.

“I was covering breaking news during not only 9/11, but the Iraq war and the Columbine shooting,” she said. “It was great to see how important it was to make sure things got done fast and in the best way possible — but, I have to be honest, it was a little too much, which is why I entered the business side of media.”

Her time on the editorial side of the media business ended when she took a position as an account executive at ABC News. She went on to help Independent Television News expand its North and Latin American operations before becoming a senior business development manager at the Associated Press.

It may have been long ago, but her time covering historical events feels like just yesterday, she said.

“Working in a newsroom is not for the faint of heart,” she said. “But it teaches you to be strong and keep going.”

ADP: Wage inequality worsens for women when bonus pay is in...