Home Health Care St. Joe’s and HMH: One is Catholic health system, other is not...
Facebook
Twitter
Linkedin 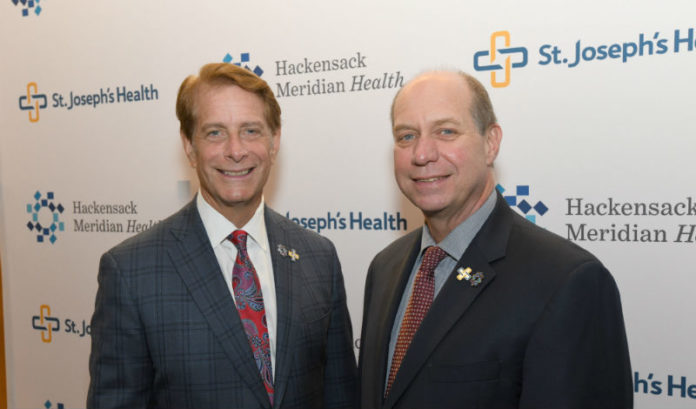 One is large, the other is small.

One is statewide, the other is community-based.

And, of course: One is Catholic, the other is not.

But, in a time when religious freedoms and expectations occasionally cause turmoil, neither St. Joseph’s CEO Kevin Slavin nor Hackensack Meridian CEO Bob Garrett feel that aspect of the partnership will be an issue.

Both, in fact, said prior experiences have made them feel they have no cause for concern.

“Two years ago, we joined forces for home care, and went into that with a 50-50 arrangement,” he said. “That’s worked well. We understand each other. We’ve worked through different issues.

“They clearly understand the Catholic mission, not just the need to abide by ethical and religious directives, but how we present ourselves as an extension of Christ’s work.”

Garrett pointed to Hackensack’s relationships with Seton Hall University for its medical school and its collaboration on research with Georgetown University’s Lombardi Comprehensive Cancer Center as examples of how it works well with Catholic institutions.

“We have two partnerships already between sectarian and nonsectarian organizations,” he said. “When we partnered with Georgetown University, we developed a white paper that really talked about respecting the traditions and the mission of both organizations while respecting the ethical, religious directives of the of the Catholic Church. It was a really successful document.”

So much so that HMH has continued to follow the formula — one it used with the medical school and one it plans to use with St. Joseph’s, Garrett said.

“We’re going to develop a white paper that talks about the traditions of both organizations, but (also) the alignment and the synergies and the respect of the Catholic ethical religious directors,” he said.

“We have not had one issue since the white paper went into effect with Georgetown several years ago and Seton Hall a couple of years ago. And we expect the same with the relationship with St. Joseph’s.”

Slavin, who said St. Joseph’s had other partnership possibilities, said Hackensack’s history with Catholic organizations was one of many checks in its favor.

“A major factor was their experience not just with us in home care, but also with Seton Hall and the medical school and with Georgetown,” he said. “We see there’s nice synergies between the Catholic organizations that are affiliated with Hackensack.”

Maintaining its identity was a requirement for St. Joseph’s in any partnership, Slavin said. And, he said, it was a reason the systems are opting to make this a partnership rather than a merger.

“It was important for St. Joseph’s to maintain our Catholic identity, our Catholic heritage, and maintain that sponsorship of the (Sisters of Charity of Saint Elizabeth) and the unique culture that St. Joseph’s has, and that Hackensack Meridian has,” he said. “So, we felt the best way to move this along to benefit both would be this affiliate model.”

It’s a model that Garrett feels comfortable with. And one, he said, that starts with transparency.

“I think it’s good to get it on the table right at the outset,” he said. “I have a lot of respect for the mission of the Sisters of Charity of Saint Elizabeth. And I think there’s no reason why we can’t work together as two organizations that are compatible, but understanding one has a sectarian mission and one does not.”

Cooper, after cancellation of merger, sues to recover $15M