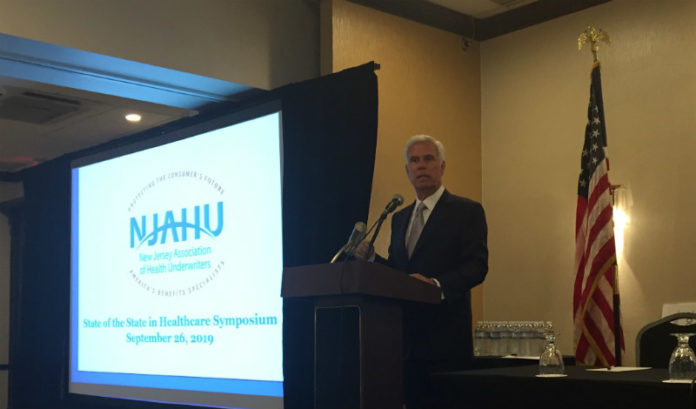 George Norcross, chairman of Cooper University Health Care, got straight to the point in his keynote address at the State of the State event sponsored by the New Jersey Association of Health Underwriters.

Speaking to an overflow crowd of more than 300 at the APA Hotel in Woodbridge, Norcross said he’s a staunch believer that every American citizen deserves quality health care, regardless of their ability to pay. How that is achieved is the issue.

“I personally believe that every American citizen should be provided comprehensive health care by the federal government, not the state government, because the problem with the state government is, it’s strangling the finances of each and every state in our country,” he said. “I think it needs to be done in a sensible way.

“(Problems start) when people are not providing the answers to what’s necessary for the future. And those answers have to come from providers like Cooper, providers like doctors, physician groups, insurance companies, self-insured funds and trusts that exist, because the American public has had it with health care cost.

“I think it’s fair to say that delivery of our health care in this country is out of control.”

The issue, Norcross said, makes politicians of both parties make promises they know they can’t keep. In some cases, he said, they are so extreme they would probably bankrupt America — or bankrupt states.

And, after railing against politicians for not offering real solutions, he offered a few of his own. His remarks were edited down for space:

“The driving cost of drugs in this country is out of control, and other countries are buying the same drugs at substantially lesser prices then the American government pays for it and the employer groups pay for it, and, ultimately, employees pay for it and every citizen. That makes no sense.”

“Obamacare, which had a good purpose to it, but became distorted in a convoluted circumstance — that provided health care for many, many millions of people who didn’t have it, but the financial circumstances under which it was created just did not work. It created a larger deficit in America.”

“Now, undoubtably, there’s some folks in the room that work for hospitals. I’m the chairman of one and I’m going to say something that some of those executives aren’t going to want to hear: If you take a look at the financial results of some of the alleged not-for-profit health care systems in our state, you’re going to say to yourself, they don’t look like not-for-profit institutions, because their operating margins are north of 10%. Now that’s not a not-for-profit institution. That’s the first place to start, because you cannot have margins in different parts of the state in New Jersey that are exceeding 10% and calling themselves not-for-profits.

“Those here that are involved and worked for insurance companies, health care in this state, undoubtedly can tell you how much they write in checks to New York institutions, Philadelphia institutions, etc. (Norcross later estimated it could be as much as $6 billion leaving the state.)

“Now, there are clear cases in which it is necessary to leave the state for care, and that should be something that can simply be done by a doctor’s decision-making without review. You have to trust your physicians to do the right thing.

“(But), when you go out of state, by and large, the charges are 40, 50, 60% higher. Now, who would pay that in the right mind for routine physical care? Who would pay? There’s so much low-lying fruit in this business that, in my opinion, would enable health care costs to be driven down.

“You see this all across the private sector; you don’t see it in the public sector,” he said. “In the private sector, employers and employees are realizing that health and wellness is the equivalent of risk management and safety, and making certain people don’t have accidents in their work environment don’t have claims.

“Health and wellness works. The reason a lot of companies have it instituted it aggressively is because they can’t quantify what they saved. There’s no way to do that until you’re actually start saving. (But), when you encourage employees and reward them and incentivize them for health and wellness, you’ll see your costs dramatically change.

“Costs are not going down, but the more people examine and start to look towards aggregating groups like MEWAs, that have not significant usage in the state of New Jersey, you’re going to see the gravitation towards that in a big way.

“A very simple thing federal government could do is to say, ‘The (Veterans Affairs) health care division has outserved its usefulness,’” he said. “Let’s let it expire and let every veteran on a priority basis go to any health care provider they want and have access instantaneously. They get great service like all of us do, and it allows them to get service wherever they want.

“The model of the VA administration for health care is absurd. It doesn’t provide the kind of comprehensive health care for veterans that they deserve. I don’t know what the VA budget is, but I’ll bet it’s astronomical. (This is ) another example where I say (this is) low-hanging fruit that can happen in the country to reduce health care, drive business into our existing providers, that allows them to be more profitable for those that aren’t generating the kind of profitability they need.”

Norcross said health care providers are at a big moment in history. They need to become more consumer-friendly and they need to be more concerned with outcomes.

Failing this, they will fail, he said.

“Health care providers, namely hospitals, are going to be judged in the future based on the services they provide, the quality of those services and the institutions that don’t have great centers of excellence are going to be beginning to have serious financial problems because the public and the patients and the consumers are going to gravitate to the places that are going to deliver that kind of outcome today,” he said.

“Now, I say all these things because I think there are answers to the national dialogue that’s going on.”

Government-run health care is not the answer, he said. Even if it does make a good sound bite.

“We all want clean air, clean water, health care for all, mom, Apple pie and the American flag,” he said. “We all want that until you ask the next question: How much would you like your taxes raised for me to pay for that? Then you get different results.

“I think Americans are going to look toward someone who’s going to stand up and talk about the ability to provide care to every American citizen phased in over a period of time, so it doesn’t bankrupt the country.”