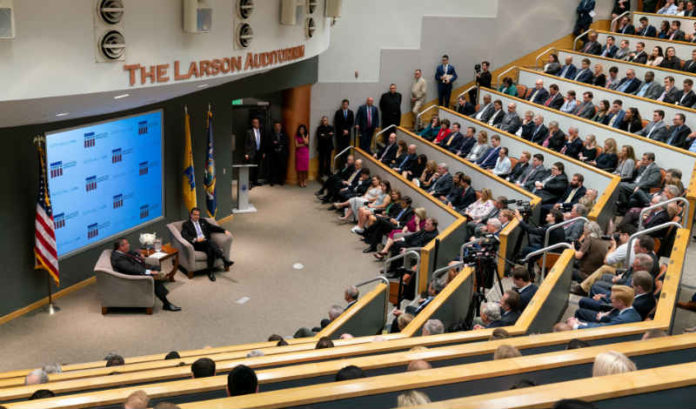 Despite the continued failure to get funding for the Gateway Tunnel project, former Gov. Chris Christie said he not only still believes killing the ARC Tunnel project in 2010 was the right move, he said he feels it one day will be viewed as one of the top moves of his administration.

“I hear about it frequently when I’m out giving talks around the region,” he said Thursday night. “I give the same very same answer: Bad deal for New Jersey taxpayers, bad project.

“It’s one of my proudest moments as governor to have had the guts to cancel it because, as you remember, I took quite a bit of heat over it. But, in the end, it was the right thing to do. And when Gateway is done, which I believe it will be, people will be looking back on (the ARC), saying, ‘You made the right decision.’”

Christie, speaking after the opening event of the Christie Institute for Public Policy at the Seton Hall Law School, said the ARC Tunnel project differs from the Gateway Project for two reasons: 1. It ended in the basement of Macy’s instead of Penn Station; and 2. New Jersey would be on the hook for all the overruns.

Christie said the state tried to renegotiate the deal, but couldn’t.

“At the end, we were left with a choice, a bad project that New Jersey taxpayers will be the only ones responsible for cost overruns,” he said. “And when you’re tunneling under the Hudson River and Midtown Manhattan, what the hell could go wrong? Right?”

Christie said he’s surprised the Gateway Tunnel project has not received funding for one simple reason: He thought he had a deal with President Donald Trump before he left office.

Christie, during the program discussion with New York Gov. Andrew Cuomo, said he thought their delegations had reached a deal with Trump.

“We went down to together, in the fall of ’17, to talk about the Gateway Tunnel project,” he said. “We sat together in the Roosevelt Room with the president and members of his cabinet and other elected officials from New York and New Jersey. I don’t know about you, but I walked out of there thinking we had a deal.”

Christie said the terms of this deal were much better: New Jersey would pay 25%, New York would pay 25% and the federal government would pay 50%.

“And, by the way, all costs of overruns were shared in exactly the same proportion,” Christie said. “That’s a fair deal.”

Christie said he remains confident a deal will eventually get done. But he said the acrimony in politics — especially the unwillingness of people to share credit — is getting in the way.

“I think this is part of the atmosphere that Andrew and I were talking about tonight,” he said. “Nobody wants to give anybody a win. (The Democrats say), ‘If we give Trump an infrastructure bill as he prepares for reelection, that may help him get reelected.’ And the Republicans (say), ‘Now that the Democrats have the House, we don’t want to give them a win on infrastructure, let them bring all this bacon home to their districts.

“I think we’ve got to get over worrying about (who gets the credit).”