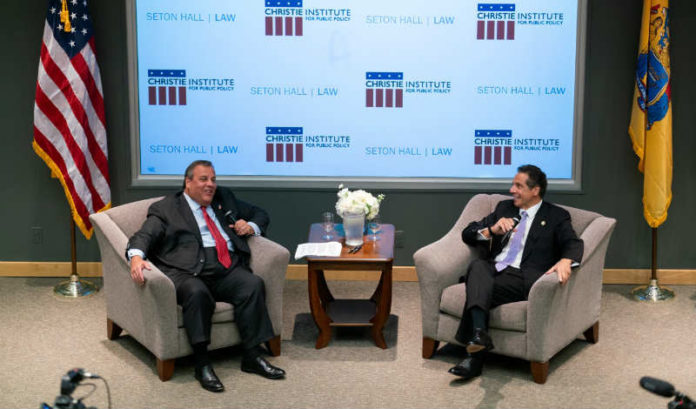 Former Gov. Chris Christie passionately defended the Grow New Jersey incentive programs that have come under scrutiny, and the people who administered them, on Thursday night — and vociferously ripped current Gov. Phil Murphy while doing so.

All this on opening night of the Christie Institute for Public Policy, which he created in an attempt to bring civility back to politics.

On this night, he certainly brought great theater.

The comments came in a media conference after an hourlong discussion with New York Gov. Andrew Cuomo — during which the two told jokes about the seven years they served concurrently — in front of a packed house at Seton Hall Law School. (And, the two did detail how their strong working relationship across the aisle helped secure an extra $20 billion in Superstorm Sandy aid.)

When it came time to take questions afterward — and he was asked about recent articles in the New York Times that discussed potentially misleading applications to the New Jersey Economic Development Authority and a federal investigation — Christie expressed confidence.

“I’m not concerned about it, because I also know that the U.S. Attorney’s Office in New Jersey did a complete investigation of the tax credit program and came to the conclusion that everything was done legally and properly,” he said. “The fact that Philadelphia is now doing their thing, that’s up to them. The U.S. attorney and the FBI in those areas get to decide what they want to do.”

Christie said the Grow NJ program did exactly what it was supposed to do.

“The Grow program was meant to bring more private-sector businesses and jobs into Camden; that’s exactly what it’s done, (what) it’s accomplished,” he said. “It was not like the other programs, which were attempting to prevent people from leaving. It was specifically designed after the first program, the (Economic Redevelopment & Growth) program, which we wound up seeing that 85% of the money was spent in the northern counties.

“So, the 2013 bill was specifically designed to remedy that imbalance of funding. And we wanted to try to help rebuild Camden. And, if you go down Cooper Avenue and Camden now and you compare it to when I first went down Cooper Avenue as the U.S. attorney in 2002, it’s unrecognizable. American Water and Subaru and the Philadelphia 76ers and all the great companies that have moved in there because of that program.”

Christie said he’s sorry the work of some state employees is being called into question — even sounding a bit like the Christie who served as U.S. attorney before his eight years as governor.

“The people of the EDA have been absolutely demoralized by the leadership this governor has put into the EDA and the way he’s referred to them,” he said. “It’s disgraceful. It’s absolutely disgraceful. Those people sat there and approved every one of those awards, along with career people from the Attorney General’s Office.

“So, if the Attorney General’s Office wants to have an investigation, it should investigate itself, because they approved every one of those awards as being legal and lawful. Every one of them. And the Governor’s Office had no influence on that. The bill was written so that we would have no discretion. If you met the criteria, you got the award. There was no discretion of the Governor’s Office to be involved, and we never were.”

The criticism of Murphy was now on.

“I think this is going to lead to nothing, as I said months and months ago,” he said. “It’s political theater by a guy who understands theater and who needs a show to distract from the fact that the major things that he ran on, he simply hasn’t accomplished, even though he has the Legislature of his own party.”

“I governed for eight years and got a lot done with the Legislature of the other party. It should be significantly more difficult. But, apparently, it’s not.”

Christie said history will be on his side.

“People are going to figure out after a while that this dog doesn’t hunt,” he said. “And I’m going to stand by the people, the EDA and the folks who administered those programs, because they did it right, and the Attorney General’s Office, who did it right. They’ve not yet uncovered one bit of wrongdoing, not anything. A lot of smoke, no fire. Let’s see the fire.”

Christie said every commission and investigation will reach the same conclusion.

“Each and every time the Attorney General’s Office, not political appointees, signed off on every one of those grants,” he said. “And that is the inescapable fact for this administration.

“That’s why they set up a separate commission. That’s why they take lawyers from New York and ship them in here to throw bombs and do all the rest of it and make news. But in the end, we’ve got to see if there’s some there, there. And, I can tell you from my time as governor, what I saw from the EDA was a group of people who were faithfully and appropriately implementing the law that’s been passed by a Democratic Legislature and signed by a Republican governor.”

“If the governor, which we know he does, disagrees with economic incentives, then, that’s fine,” he said. “Just be honest about it. Just say, ‘I don’t want to do it.’ Don’t impugn what was done before.

“Just have the guts to stand up and say, ‘I disagree, and my program’s going to be better.’ His program (is) higher taxes and more government spending; that’s the program he thinks he’s going to bring economic growth to the state. Even though, on his watch, our GDP is half of our neighbors’. We’ll let the proof come out.”

Harris, Perry named as trustees of Foundation for University Hospital

Don’t be fooled: Certificates of Insurance are not as valuable as...