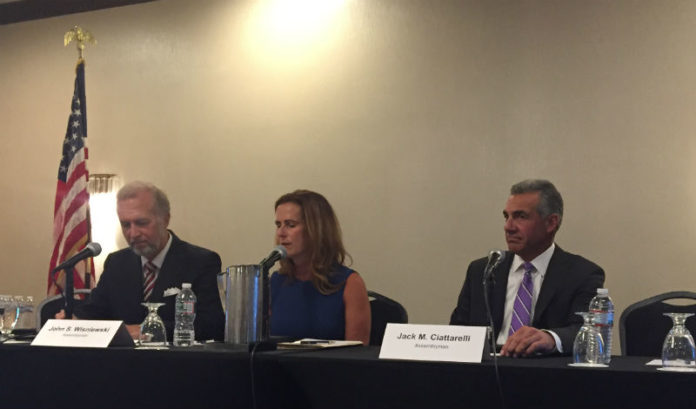 Former Assemblyman Jack Ciattarelli is not allowed to announce he is running for governor until January. But he can tell folks what he plans to do.

That was clear Thursday at the State of the State health care conference sponsored by the New Jersey Association of Health Underwriters.

“I have to use the word intent,” the Republican told the crowd of a few hundred. “It is my intention. I plan to run; I’ll declare sometime in January of 2020.

“I love the challenge and it’s something I really look forward to and in terms of taking the state in a different direction.”

Another former assemblyman, John Wisniewski, wasn’t as certain. Of course, the Democrat would have to wait to see if Gov. Phil Murphy — who beat him in a primary last time around — is running again.

All Wisniewski would commit to is the love of the job.

“I spent 22 years in the Legislature,” he said. “I was first elected in ’95, after having run unsuccessfully in ’93, and I probably was involved in politics for 10 years before that.

“I am enjoying my time outside of the Legislature now. But there is one thing that’s true for anybody who’s held elected office: It is an incurable disease? It is something that lingers just below the surface. And I enjoy being involved in public life and public discussions, and I look forward to some opportunity in the future to continue to contribute to the state as that for an idea.”

The two former assemblymen have grown closer since both left office in 2018, often appearing together on shows and panels.

They enjoyed giving the audience a back-and-forth on a number of issues, many centered on health care. The best remarks, however, pertained to Murphy — and the idea of a supposed outsider taking the top political job.

“I subscribe to the notion that, you know, whoever the pilot of the airplane is ought to be succeeding, because it matters to me as a passenger. And, so, I want to see Phil Murphy succeed,” Wisniewski said. “But I think one of the things that you’re seeing play out in real time is one of the things that I talked about in the campaign: There is a difference when you bring somebody in from the outside.

Even the power of the office can’t overcome some things, Wisniewski said.

“The notion that’s often ascribed to the New Jersey governor, the most powerful chief executive in the nation after the president of United States, (is) true in theory,” he said. “But it’s only true in practice if you have the experience and the people around you to help make that a reality. And, while I think the governor wants to create a different model, he wants to be the guy that comes in from the outside and shakes things up and changes things, there is a limit to having success in doing that if you don’t have the relationships within the Legislature, you don’t have the institutional memory about how things happened for other governors and how things got accomplished with other governors.”

Wisniewski said he gets it, being an outsider has an allure. It’s just a guarantee of success, he said.

“There’s some kind of allure where there’s a frustration with the political process and those politicians and Trenton, so let’s bring somebody in from the outside and they’ll get something done,” he said. “Well, there’s a value to that to a degree, but they have to operate within a system that is not a great system. It needs a lot of reform, but you can’t come in and make those changes if you don’t have the relationships with the institutional knowledge on how to do it.”

“I think John and I have always gotten on so well and there’s been a very healthy mutual respect because we’re both policy guys,” he said. “That’s where the answer is. I’m sure there’s a little bit of politics in all that we do, but we’ve always been policy guys and, if you look at our track records on things like the gas tax and other things, it’s always been about the policy.

Ciattarelli said Murphy needs to find a way to be more productive.

“I’m all for positive change, but the challenge that I have with some of these progressive candidates, and Phil Murphy’s one of them, is they like to talk, but they don’t govern,” he said. “(New York Mayor Bill) de Blasio talks, but he doesn’t govern. And when you disagree, you’re not just wrong, you’re bad. And I find that they incite class warfare with some of their rhetoric, which isn’t good for a state like New Jersey, which is diverse as it is.”

Ciattarelli closed with some humor.

“Other than that, what’s wrong with taxing everything and, what you can’t tax, you give away for free and then we all go home and get high on marijuana,” he said.