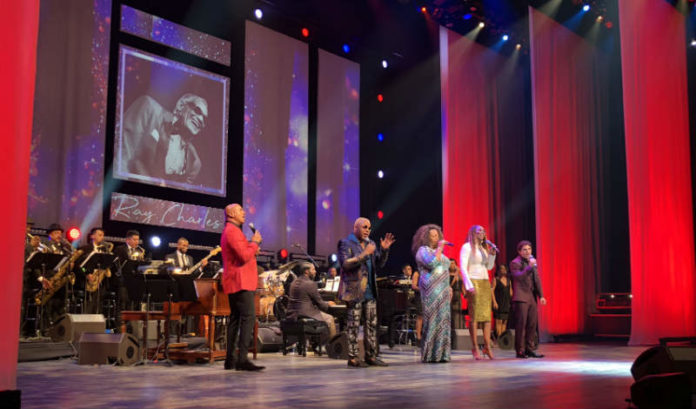 As he spoke to the packed house in the main performance theater of the 22-year-old building that still looks brand new Saturday night, New Jersey Performing Arts Center head John Schreiber noted how the tribute to Ray Charles at the Women’s Association Spotlight Gala was so fitting and appropriate.

Schreiber explained Charles was the keynote performer at the first gala — one that took place at Hangar 55 at what was then called Newark International Airport because NJPAC was still a few years away from its official opening in the fall of 1997.

“Ray Charles put us on the map before we even had a building,” Schreiber said.

NJPAC is so much more than that now.

The gala raised more $2.2 million for its arts education and community engagement programs, initiatives the center uses to both bring youth to NJPAC and take NJPAC’s arts into the community.

And that was before Sunday’s blockbuster announcement that New York Giants co-owner Jonathan Tisch and his wife, Lizzie Tisch, were making an additional donation of $5 million.

Arts education, Schreiber said, is the mainstay of NJPAC’s mission.

“The biggest part of our job as a cultural institution is to engage the next generation of cultural citizens,” he said. “Training kids in the arts, exposing kids to music and dance and hip hop and poetry and filmmaking and musical theater, you name it, is a part of the DNA of the place.

“And it is not important to us whether the child ends up on Broadway. The confidence kids gain by participating in the arts is unmistakable. Whether a kid becomes a dancer or an actor or a dentist or an accountant is immaterial. It’s just is a way for a young person to feel a sense of power and accomplishment and learn how to cooperate and succeed in life.

Of course, it’s also the center’s job to put on a great show.

It’s why the NJPAC gala — which many consider the opening act of gala season in the state — always is one of the best. Saturday night’s event was no exception.

It started with a meal created by Marcus Samuelsson, who has brought his award-winning talents to Newark with the opening of Marcus B&P.

Then Ray Chew, the music director of “Dancing with the Stars,” expertly led a tribute to Charles that include performances by Davell Crawford, Jarrod Spector and Grammy award-winning artists Diane Reeves and Yolanda Adams (who brought the house down with a stirring performance of “Georgia,” the signature hit of Charles’ incomparable career).

All of this came after a performance by Savion Glover, the “Tap Dance Kid,” who just completed his fourth summer mentoring and working with area youth. Some of those students joined him on the stage for the opening act.

Public Service Enterprise Group executives Ralph Izzo and Ralph LaRossa were honored with the Founders Award for their commitment to NJPAC, Newark and the arts.

Schreiber said the gala is the one night that NJPAC gets to take a bow.

“It’s the one event where almost everybody at the art center pitches in, volunteers, staff from all the different departments, the production crew — is here,” he said.

The same can be said of the arts community.

“It brings all sorts of members of our community together, everyone from our teaching artists, our Newarkers and our donors.”

“Those were the guys who started it all,” Schreiber said. “It’s great that they are still here and as engaged as ever.”

All this, 25 years after a Ray Charles concert in an airport hangar started it all.

“They had 1,100 people come to a hangar at Newark airport to sort of kick off the idea of an arts center,” Schreiber said. “At the time, it was the biggest benefit event ever held in New Jersey. It said something important is coming.”

And, thanks to the money raised this weekend, more good things are coming.