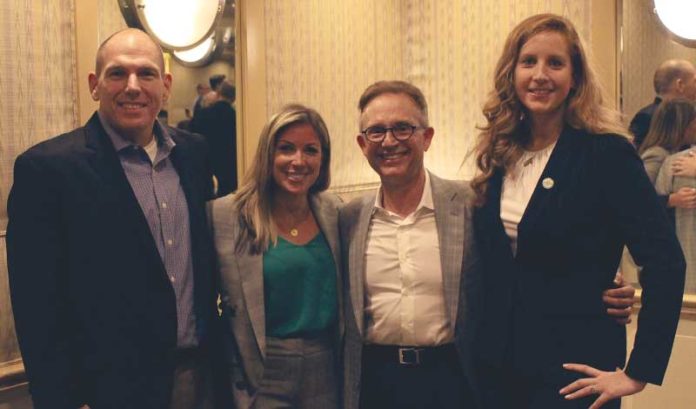 The war over the legalization of adult-use cannabis in the state has not slowed the expansion of the ever-growing cannabis industry. CBD products, derived from cannabis without the traditional psychoactive effects — and perfectly legal — have become more popular in an explosive growth of related businesses in New Jersey.

Well-known companies such as American Eagle, DSW and Abercrombie & Fitch are jumping on the cannabidiol train with CBD-infused body-care products. More companies are following suit, or at least considering it, as the CBD industry has the potential to become a $22 billion business by 2022, according to cannabis-focused research firm Brightfield Group.

Despite the increase in general popularity, CBD products are still unknown variables for many business and investors.

Here is some of the conversation:

ROI-NJ: Let’s put this in perspective. How big can the CBD industry be in New Jersey?

Francis Boero: It looks like we’re going to finish 2019 with right around $900 million in economic activity around hemp-derived CBD. It’s an interesting market because it’s not smoked and it’s not vaped. Nearly 80% of that market comes in two areas: edibles and topicals. The majority is edibles; they account for about 53%, or $450 million. About 25% is topicals, so they account for around $250-300 million.

This market looks like it’ll go to $2 billion to maybe $5 billion.

Dara Servis: A recent study said the market for CBD — not just hemp-derived CBD, but also cannabis-derived CBD, which tends to be a little bit trickier and controversial — is expected to be larger than the dairy market in North America in 2022. It’s aggressively moving.

ROI: Who is the consumer in the market and what do they want?

FB: Data shows we’re dealing with a consumer that is 38 years old or older. So, if you’re thinking about products, that has to be your target. Uniquely, these consumers say they’re using CBD for quality-of-life improvements. They’re either taking it for health and medical reasons or they want it to improve social tension. So, if you have a product that reduces anxiety, offers some pain relief or makes it easier to sleep that’s targeted toward an over-38 demographic, you’re good.

ROI: Talk about the state of the industry today and how it is changing — and how much it has changed?

Harry Carpenter: There has been a lot of discussion over the past year on how the 2018 farm bill impacts accounting and taxes for companies in the cannabis space, specifically dealing only in CBD. As the leading accounting firm in the industry, we have taken the position — and we are in agreement with several law firms — that the farm bill has effectively descheduled CBD below 0.3% THC percentage.

That has substantially changed the effect of the way we actually file and prepare a tax return. A year ago, you were still subjected to Section 280E (the federal statute that says a business engaging in the trafficking of a Schedule I or II controlled substance is barred from taking tax deductions or credits).

The good news is that CBD products are now no longer section 280E. So, if you were trying to be an entrepreneur and starting up your business in the CBD space, that was a huge roadblock for a lot of companies and really actually put companies out of business.

ROI: Here’s the obvious follow: Do banks want to play in this space?

Nicole Maguire: There are several banks in New Jersey that are cannabis-friendly, especially if you’re using or you’re trying to create a product that’s hemp-derived CBD. You have to answer a questionnaire. Their compliance department will look at it and you can open up your bank account. One that comes to mind is Bayonne Community Bank. I know they’re cannabis-friendly. And I know there’s also private companies out there, too, that are offering loans to individuals who are looking to become involved in the industry or who are already involved in the industry.

HC: Nicole stole my thunder. BCB is my go-to bank. There’s been a lot of banks that have talked about potentially being in the industry, and then they change their mind and, all of a sudden, you have a bank account that gets shut down.

DS: That happened to us. We actually had the NJCIA’s bank account shut down. The bank didn’t tell us that our account was shut down. I went to the bank and they said they weren’t allowed to talk to me. A week went by and I was given the money that was in the account. We went to about eight different banks and six different credit unions — and, after going through their ethics department, their legal department, they still wouldn’t take it. And we were not a plant-touching. We’re an advocacy policy trade association, so we don’t touch the plant. So, I’d be a little bit careful.

ROI: Let’s talk about other obstacles. A letter recently went out from the FDA to certain companies with warnings about CBD products. Is this going to have a chilling effect on the industry, specifically for CBD-infused food products?

NM: Not necessarily. This isn’t the first time that the FDA has sent out warning letters to companies that are producing products that contain hemp-derived CBD. The issue the FDA is having with these companies is that they’re making aggressive health claims. So, they’re saying that CBD is going to cure cancer, it’s going to cure your anxiety, it’s going to do X, Y and Z. And they don’t have any support to substantiate these claims. There are no clinical studies to back this up.

The FDA doesn’t want people forgoing traditional medical treatment in favor of these products that have unsubstantiated claims. That’s why they’re sending out these warning letters.

ROI: What else might we see from the FDA?

FB: I would look back on (former FDA Commissioner Scott) Gottlieb’s last comments at FDA. He really seemed to point that he would like to see CBD below a certain threshold dose limit, or serving limit, and to see it go to the consumer route as a supplement. I’ve been saying, it hasn’t happened yet, but if the FDA continues with this public response, it would be very plausible that food manufacturers would then be subject to renewed supplement controls, which means registered formulations, registered facilities.

ROI: If that happens, how does that impact the industry?

FB: If you go the supplement route, it means the FDA is recognizing that there are limits to CBD. And it’s probably wide enough for the industry to experiment while leaving room for the pharma companies to experiment with some very higher doses.

ROI: We hear about food companies get into this space. Tell us about that?

FB: I think it’s safe to say that all the major food companies are looking at this. The professional manufacturing confectionery association will be holding about a 200-member training meeting on this in November. Their membership includes Hershey’s and companies like that, so, there’s obviously an interest there. But you’ll never see it as a Hershey’s product. It’s going to be called Mr. Ed’s Naturals or Green Organics or something like that.

Companies have bought arms-length companies to introduce and test. What are they afraid of? Company reputation. If 50% of us don’t understand the difference and still see cannabis as a bunch of guys smoking a joint behind the garage, they don’t want to associate their names with it. That’s changing. But expect that the food companies, as soon as FDA and USDA clarify items, are going to be in there like that.

ROI: How soon will that be?

DS: As soon as the FDA is conclusive on how they want to go ahead and regulate it. What I would advise to operators is follow as closely as possible to the compliance side. So that, when the green light does actually go on, they’re able to just go ahead and launch to market.

ROI: What are some things that need to change to help the industry?

FB: Here’s the biggest one: When states legislate their regulations, they don’t isolate testing labs from the equation. By isolating, they treat a cannabis testing lab as a criminal enterprise. It’s a special license. You can’t put it next to schools. You can’t test anything else.

If we can move legislators to say hemp-derived CBD can be tested in any of the food labs, New Jersey would really benefit. We are the food and flavor center of America. We have the best labs in the country. We do performance testing. You could couple that with an industry statement of responsibility and some common warning labels.

ROI: What else can or should the state do?

DS: The biggest challenges that operators face are the barriers to entry here. There was a point in time where I really believed we were on the right track. And we were full steam ahead and then things went wrong. There’s an 18-month cap on vertical integration right now. This round is only calling for three vertically integrated licenses, 24 in totality, and they’re broken up. So, right now, there’s not even a manufacturing license that’s going to be given out this round.

NM: The biggest challenge the executive branch has had — and not just with cannabis — is working together with his legislative branch. We really had a three-part comprehensive decriminalization, medical expansion, adult use bill all tied together. And it was one of the most progressive and comprehensive pieces of legislation that other states are actually modeling it after. Now, there’s a disconnect.

ROI: Talk about the social justice side of the industry?

FB: I’d like to see a thriving, profitable and ethical business that, underlined here, reduces social harms from where we are now. If you don’t think we can reduce social harms, I want to remind you that, over the last 80 years, we basically stopped science and cannabis. So, we’re starting this business without knowing a lot.

We’ve incarcerated about a million people and we spent well over $1.5 trillion. Outside the U.S., there are drug cartels taking that money from our inner cities, moving it out of the country. A well-regulated ethical business that invests right at home and reduces social harm would be very interesting.

ROI: Let’s say I’m in this space — or working to get into this space — and I’m just beginning. What’s your advice — or how can I get advice?

HC: How is your recordkeeping? That always my first question. Startup entrepreneurs are a little old school, where you’re starting with the box or the folder full of receipts. And the further along you get, the messier it gets. Whether it’s QuickBooks or something else, get your record keeping correct if you have the plans of getting into a THC business later on.

DS: I would encourage you to get involved with the NJCIA. We have members from every sector of the industry including finance, including industrial hemp, not just the typical plant-touching businesses. We have blockchain technology and, for our members, we host a weekly update to go over sort of where we’re at legislatively, what are some of the other events that we’re getting involved in. And we have a collection of data cultivated by all the thought leaders that are involved in our organization.