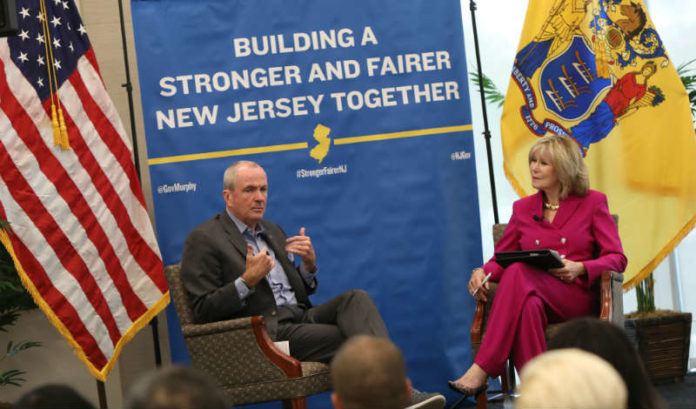 One year after the introduction of his economic plan for the state, two things remain clear for Gov. Phil Murphy:

That was clear during his 70-minute invitation-only talk for state and business officials Tuesday at Rowan University.

In a fireside chat format where he took questions from Linda Bowden, the New Jersey regional president for PNC Bank and the chair of the New Jersey Chamber of Commerce, Murphy outlined four moves he feels will help create the stronger and fairer economy he has advocated for since announcing his run for governor.

“This will be a $3 million smart, focused business promotion campaign to make sure the world knows our story,” he said.

Murphy specifically cited Newark Penn Station, Jersey City, Metropark and Trenton, but said all options — big and small — are on the table.

“(The EDA and NJ Transit) literally will work together and figure out how we bring those up to the 21st century and develop those as real transit hubs and villages, taking underutilized assets and getting them to punch at their weight,” he said.

“This is real. This has never been done before between the EDA on the one hand, NJ Transit on the other. And any economic development textbook you read will tell you, you get your transit centers hitting on all cylinders, you’re going to have big economic development as a result.”

“We really want to get the incentives across the goal line,” he said. “And I think we’ve shown that the film and television tax credit is a home run for the state.

“We are on fire. We have a really progressive and competitive tax credit, including a diversity rider, which has really gotten a lot of attention.”

“We are beta testing a portal called, ‘Business First Stop,’” he said. It’s at business.nj.gov.

Murphy said it has practical resources for companies wanting to come to the state and companies in the state looking to expand.

“This is something folks were begging us to help develop as far back as five years ago, even before I declared I was running,” he said. “Under the theory that, when you sit with a businessperson in New Jersey, the words red tape don’t even begin to tell half the tale.”

Of course, with all big ideas comes a need to find revenue to pay for them.

While Murphy did not specifically call for greater implementation, he did lament what he said was an incredible amount of lost revenue that would have come with a greater millionaire’s tax and if the state did not reduce the sales tax during the process of raising the gas tax to fund the Transportation Trust Fund.

How did all of this go over?

The mood in the room was mixed. Some said there was no new ideas. Others said it still didn’t go far enough to address the biggest issue for companies: the cost of doing business.

Tom Bracken, the head of the state chamber and someone who has openly pushed Murphy to do more for business, came away impressed. Or, at least, with hope and optimism.

“I think he gave a very honest response to questions that was passionate,” Bracken said. “He was very realistic about where we are as a state and what we need to do.

“It sounds like the issue of the stronger economy is moving up on his radar screen. And we hope that our plan for more affordable New Jersey, which we’ve talked to them about, can be more formally incorporated. That would really help us bring progress.”

Bracken even overlooked the tax talk.

“We’ll always have issues with the millionaire’s tax and other taxes,” he said. “But the four issues he brought up today are all positive.

“All were talking about is movement, those four things help move us. I come away from this having heard him give an honest interpretation of where we stand, which I think was very well done, and also a greater appreciation for what we need to do.”

Investment trends for 2018… and beyond