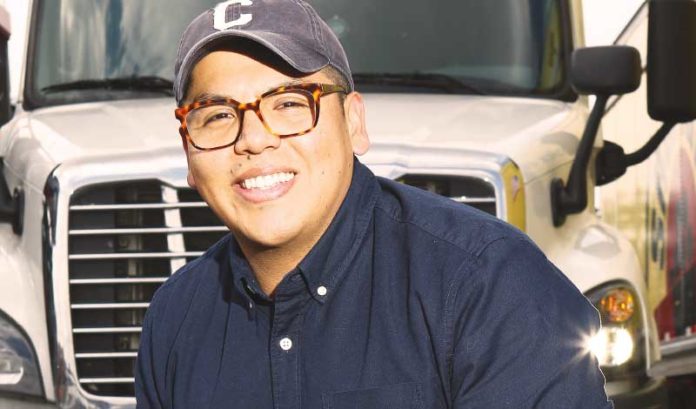 The young minds moving on from tech companies such as Google are making themselves at home among the rugged-by-reputation 18-wheeler drivers in the logistics sector.

Rodolfo Valdivia Jr., an entrepreneur and newcomer to the sector himself, said these are new acquaintances.

“Folks in the supply chain industry have been ignored by people at tech companies for a long time,” he said. “They just weren’t interested in the sector. But, now, because they’ve seen how Amazon created their own logistics ecosystem, they’ve become a lot more interested.”

They’re bringing new ideas to an industry that has sometimes resisted the latest technology. And Valdivia wants to be part of driving home the importance of tech in the logistics sector, too.

But, unlike the sector’s other fresh recruits, his training wasn’t in the patchwork of West Coast tech startups. It was in the war zones of Iraq and Afghanistan.

As he describes it, he came into contact with the logistics sector purely by accident. Valdivia was preparing to help with the counterintelligence operations of the Marine Corps when, right before graduating boot camp, he was reassigned to motor transport mechanic duties.

“The reason was because, in 2007, the war in Iraq was at full throttle, and there were a lot of convoys being done on trucks,” he said. “A lot of trucks were going down either by (improvised explosive devices) or just wear and tear. So, it made sense that I got reassigned, and I ended up enjoying my job.”

In Iraq, he was involved in creating a warehouse system when the armed forces needed to keep track of the parts required to fix trucks.

It was the business of logistics; he just didn’t know it at the time.

Much later, he and two co-founders came to the launch of Log.Ai, a cloud-based warehouse management software, joining the cast of tech-minded logistics solutions providers that are now invading the space.

But Valdivia took a detour to do something that not every computer whiz entering logistics has done. He drove a truck for several months himself.

“It was something I was nervous about — my wife had just given birth to our second child — but my instinct just told me to become a truck driver,” he said. “I wanted to just get on the road and see firsthand what the pain points were in the logistics sector.”

He put his boots on the ground after learning about the impact of logistics and the volume of truck deliveries on gross domestic product during a short stint as a wealth management associate at Morgan Stanley. Doing it himself, he was able to identify some delays in the delivery ecosystem that he believed could be remedied with streamlined processes.

“I would drive up to a warehouse or distribution center and, a lot of times, we were just waiting a while for the load,” he said. “I would be upset because that was time I was burning not doing anything. There was a lot of miscommunication and inefficiencies that I saw as missed opportunities in the supply chain.”

Valdivia encountered numerous instances of what he called “old-school attitudes” among leaders of logistics companies.

“I realized that these people in leadership positions now were the same ones executing it back in the ’70s,” he said. “So, they’re still trying to run it like they did it back then. They’re not staying aware of tech that’s out there to do things differently.”

That was more than enough to convince him to make full use of available tech tools to ease supply chain operations, which is why he teamed up with a data scientist and a software engineer to launch Log.Ai.

Their startup is still at the incubator phase, but Valdivia believes the solution they’re developing will go toe-to-toe with existing warehouse management systems through a combination of analytics and artificial intelligence.

“But, at least for us, we don’t want to follow the wave of analytics and AI just to replace the role of workers,” Valdivia said. “We want to use technologies to empower them by giving them these tools.”

There are a number of companies that are trying, like this New Jersey startup, to allow warehouses and shipping companies get their goods to clients in a more efficient way. And that’s a reflection of the new standard for shipping and delivery that’s been set with the growth of e-commerce, Valdivia explained.

Even if it’s still in an early stage, this sergeant-turned-entrepreneur thinks Log.Ai will demonstrate why, instead of simply injecting AI or other tech into the logistics sector, it’s important to put yourself in the driver’s seat first.

“A lot of new tech solutions in logistics are focused on how to we enable people to track and receive so they can accomplish that, but they never take into consideration how to also make the trucker’s life easier,” he said. “We want to design warehouse management systems in a way that makes people happier to do their job.”